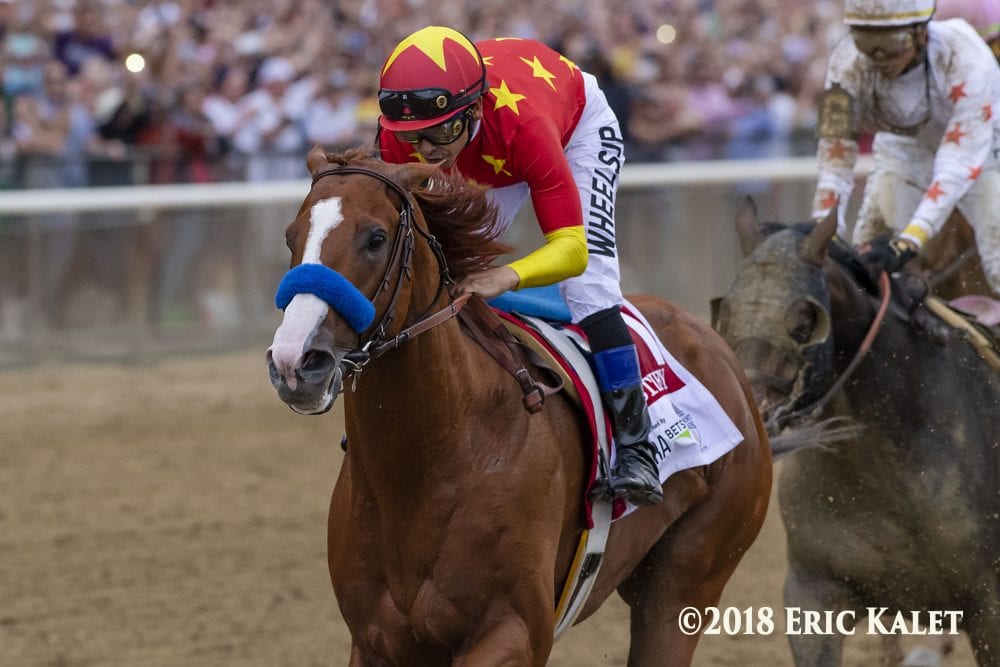 Justify, who won all six of his career starts from Feb. 18 through the Belmont Stakes on June 9, was retired due to injury in mid-summer to stand at Coolmore's Ashford Stud in Kentucky.

Runner-up in Horse of the Year voting was Accelerate, the 2018 Breeders' Cup Classic winner who won won six of seven starts, including five Grade 1 – his only loss coming in the Oaklawn Park Handicap in April. Accelerate is trained by John Sadler and is owned by Kosta and Pete Hronis's Hronis Racing, which received the Eclipse Award as Outstanding Owner. The son of Lookin At Lucky was bred in Kentucky by Mike Abraham. Accelerate is scheduled to make his final career start on Saturday in the $9-million Pegasus World Cup Invitational at Gulfstream Park, then will embark upon a stud career at Lane's End in Kentucky.

Justify received 191 out of a possible 249 first-place votes for Horse of the Year. Hronis Racing's Acceleratereceived 54 first-place votes to finish second, followed by the filly Monomoy Girl with two votes, and Prince Khalid Abdullah's filly Enable (GB) with one vote. There was one voter abstention.

Justify becomes the third Horse of the Year to be trained by Baffert, who also trained 2015 Horse of the Year and Triple Crown winner American Pharoah and the 2001 winner Point Given. Baffert had a second Eclipse Award winner of 2018 when Mary and Gary West's Game Winner was voted Outstanding 2-Year-Old Male.

“I'm so proud of Justify and I'm happy to see he is being rewarded for his unbelievable accomplishments in his run up to the Triple Crown,” Baffert said. “I've had the great fortune to be around some of the most talented horses and what Justify was able to do in such a short amount of time still takes my breath away. He is truly a horse for the ages and deserves his place among racing's elite. I'm grateful to WinStar Farm, China Horse Club, and SF Bloodstock for sending this horse to me to train. It has been an honor and privilege and a hell of a lot of fun to be part of his story.”

The complete list of 2018 Eclipse Awards winners and vote totals appears below:

Voting Overview
In voting that concluded Jan. 2, 2019, Eclipse Awards voters cast their ballots to rank the top three horses and individuals in each Championship division on a 10-5-1 point system basis. This voting established the top three finalists in each division, whose names were released on Jan. 5, 2019.

The tallies below represent only first-place votes from members of the consolidated voting entities, NTRA, Daily Racing Form and National Turf Writers And Broadcasters.

Award of Merit
The recipient of the Award of Merit, voted on by a panel of representatives from the three presenting organizations and previously announced, is Joe Harper, Chief Executive Officer of the Del Mar Thoroughbred Club.The Award of Merit is presented to honor outstanding lifetime achievement in the Thoroughbred industry.