Thousand Words Fights Hard In Robert B. Lewis To Give Baffert His 3,000th Victory 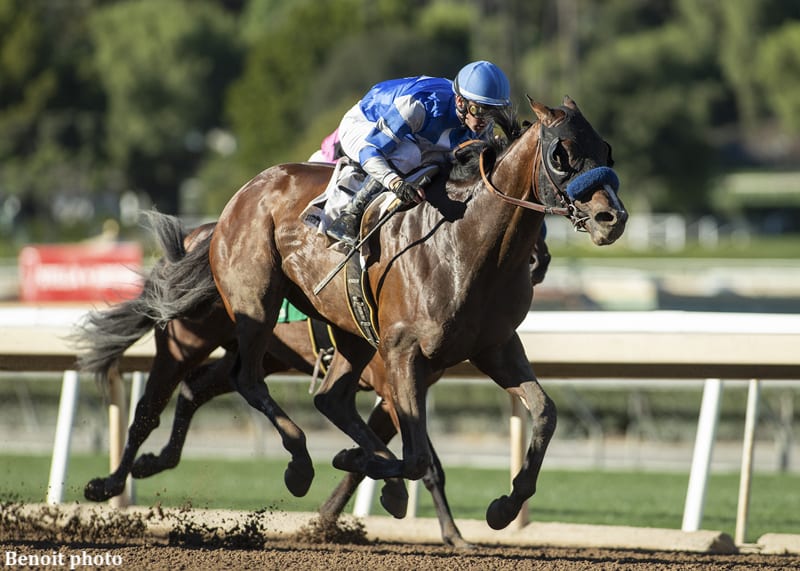 Albaugh Family Stables and Spendthrift Farm's Thousand Words had to dig deep for his win in Saturday's Grade 3 Robert B. Lewis Stakes, fending off the late run of 18-1 longshot Royal Act to win by three-quarters of a length on the wire. Ridden by Flavien Prat, Thousand Words ran 1 1/16 miles over Santa Anita's fast main track in 1:43.64 to remain undefeated and earn 10 points on the Road to the Kentucky Derby.

A 3-year-old son of Pioneerof the Nile, Thousand Words gave his Hall of Fame trainer Bob Baffert a milestone 3,000th North American victory with his triumph.

“I've always thought things happen for a reason,” said Baffert. “Running in the Bob Lewis, with a horse named Thousand Words and going for 3,000 wins. I mean you can't make that up. I had a feeling it was gonna happen in this race, I've had a lot of good people work for me through the years, the first 50 wins were probably the hardest, 100 were life changers. I feel very blessed and fortunate … to do so well in this business after coming from the quarter horse business. I've never dreamt of coming into thoroughbreds, there was never one instant I was thinking about it. I came over with Mike Pegram and Hal Earnhardt who I still have after all these years, they are a big part of the team.”

The winner's stablemate High Velocity wrested the early lead from the sharp-breaking Tizamagician around the clubhouse turn, taking the field through fractions of :23.65 and :47.20. Thousand Words was shuffled back to fourth along the rail behind Royal Act, but remained loaded down the backstretch and had just two lengths to make up as the field moved into the far turn. Royal Act had to take the overland route, going three-wide to make his bid.

Thousand Words bulled his way between High Velocity and Tizamagician at the top of the stretch, then had to battle his stablemate through most of the stretch to make the lead. Thousand Words hit the front at the sixteenth pole, and stayed game late to fend off Royal Act by three-quarters of a length on the wire. High Velocity held on to finish third, and Tizamagician had to settle for fourth.

Encoder and Zimba Warrior completed the order of finish.

“Prat knows him pretty well, I didn't give him any instructions,” said Baffert. “Both riders were kind of on their own. Prat says he is getting better, he was a sort of immature colt. He grinds and you gotta really work at him. Being stuck down inside he got the worst of it. Usually a young horse like that they don't run that well and they don't respond. He's got that big long stride and the further the better with him. You could tell about the last 50 yards he was really getting going. He came back he wasn't even tired so that is a good sign. He is progressing with every race and to win three in a row like that it is pretty impressive.

“I told Rosario don't fight High Velocity if he wants to run, I really thought down the backside High Velocity was gonna steal it, he has a lot of speed and he hung in there well.”

Bred in Kentucky by Hardacre Farm, Thousand Words is out of the multiple graded stakes-winning Pomeroy mare Pomeroy's Pistol. The colt commanded $1 million at the Keeneland September yearling sale, and posted a game debut victory in late October at Santa Anita. Thousand Words followed that up with a neck win over Breeders' Cup Juvenile runner-up Anneau d'Or in the G2 Los Alamitos Futurity in December, and stayed undefeated with the Lewis win in his 3-year-old debut. Overall, the colt has earned just over $200,000.