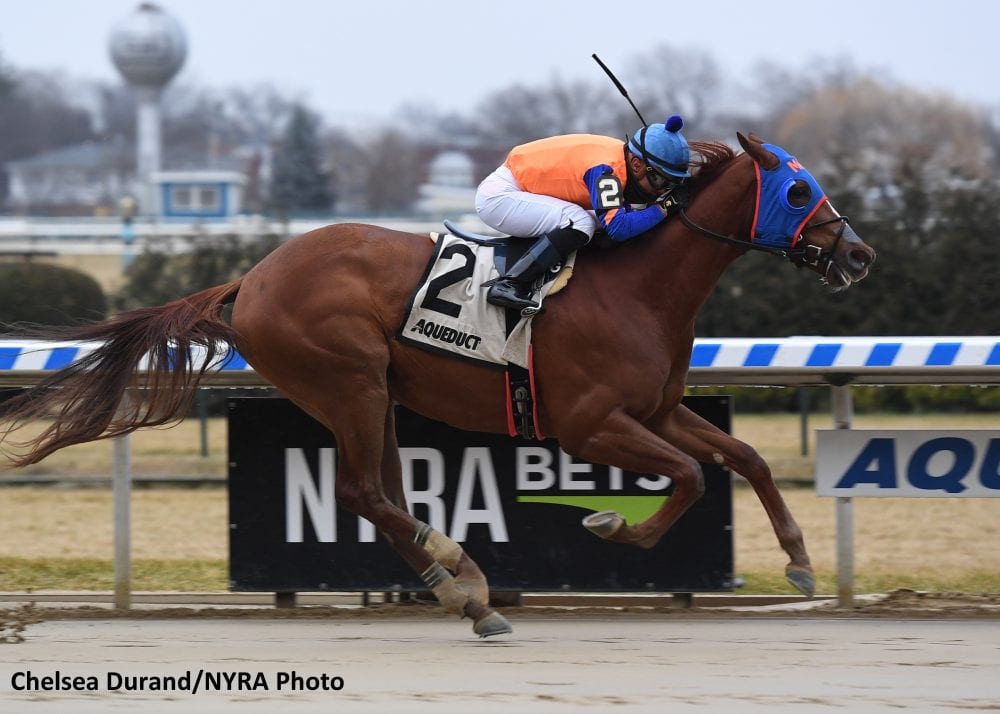 Not That Brady captures the Damon Runyon

Not That Brady, co-owned by Michael Imperio, Lianna Stables and his trainer Rudy Rodriguez, went from claim to fame with his victory in the Damon Runyon, and will look to add a graded win to his resume when he steps forward in the Grade 3 Gotham on March 9, at Aqueduct.

The Big Brown gelding, out of popular stakes winner Lisa's Booby Trap, was claimed for $50,000 out of a fourth-place effort in his August 23 debut at Saratoga Race Course.

After faltering in his October 20 debut for new connections when last of ten in an off-the-turf sprint at Belmont Park, Not That Brady has posted two wins and two seconds, including a last out second, defeated just a head, in the Grade 3 Withers where he picked up four Kentucky Derby qualifying points.

“We were very disappointed with the effort at Belmont when he was eased. I still don't know why he ran so bad,” said Rodriguez. “So, we put him back on the grass and it came off the turf, but he ran a big race to be second. So, we just kept going that direction.”

In the Withers, held February 2 at Aqueduct, Not That Brady broke from the outside post in a field of seven under Reylu Gutierrez and was prominent throughout over nine furlongs when narrowly bested by Tax.

“In the Withers, he ran a very good race. He lost a lot of ground into the first turn. We broke to the outside and maybe if he had a horse outside of him, he would have broke better, but I was very encouraged to see him finish off the way he did. You don't expect to run that good first time going a mile and an eighth,” said Rodriguez.

The veteran conditioner said he is not in a rush to put the chestnut back on the work tab.

“We might breeze on Monday or Tuesday. He's training good, feeling good and the Withers was a hard race for him, so I don't mind giving him a couple of weeks off,” said Rodriguez.

Rodriguez is cautiously optimistic about whether he's conditioning a potential Kentucky Derby contender.

“I'm not sure of that, but I know he's improving, and we have to keep our fingers crossed that he keeps improving. He's going very good right now,” said Rodriguez.

Not That Brady, bred in New York by KatieRich Farms, will compete in the Gotham, which offers 50-20-10-5 Kentucky Derby qualifying points, for the benefit of the Belmont Child Care Association (BCCA). The owners have collectively committed 10 percent of Not That Brady's Gotham purse earnings to the BCCA, and his jockey, Reylu Gutierrez and agent Jimmy Riccio, have promised an additional 25 percent.

Not That Brady will turn back to a mile for the Gotham, a distance at which he owns a perfect in-the-money record.

“He has two wins and a second going a mile. Hopefully we break a little better and put ourselves in the race early,” said Rodriguez. “He's got plenty of speed to put himself in a good position and if they leave him alone a little bit, he can carry his speed.”