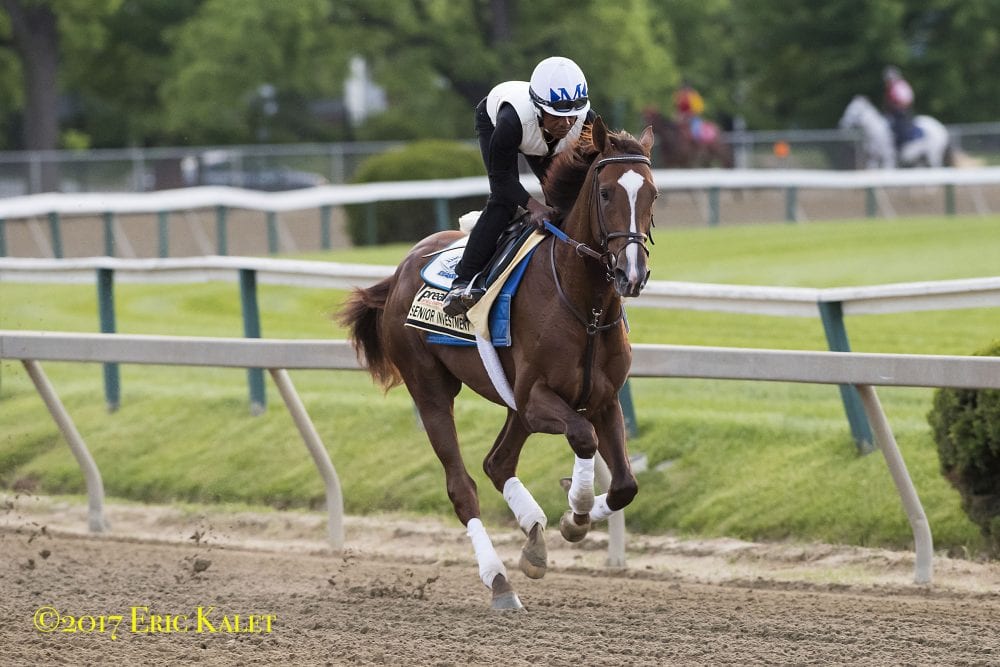 Senior Investment galloping at Pimlico prior to the Preakness

Fern Circle Stable's Grade 3 Lexington winner Senior Investment posted a half-mile breeze early Wednesday morning in preparation for his expected bid in the Grade 1, $1.5 million Belmont Stakes, presented by NYRA Bets, his first tune-up since finishing third in the Preakness on May 20.

Ridden by jockey Dylan Davis and overseen at Belmont by Kenny McPeek's assistant trainer Jeff Odintz, the chestnut colt by Discreetly Mine completed the distance in 49.13 seconds shortly before 6 a.m. on the main track, going in splits of 12 2/5 and 24, and galloped out five furlongs in 1:02 2/5, according to NYRA clockers.

“Kenny wanted him to go an easy 48 and four, 49 [seconds], and let him do it on his own,” said Odintz. “And that's exactly what he did, Dylan did a very good job. He came back fine, like he didn't do anything. The track was nice and quiet, he was relaxed.”

Senior Investment was disqualified from first to seventh in his seasonal bow at Fair Grounds in January and came back with a three-length victory in an optional-claimer February 18 at Oaklawn Park. He joined the stakes ranks with a sixth-place finish in the Grade 2 Louisiana Derby, finishing 5 ¾ lengths behind Girvin, and posted a head victory in the Lexington at Keeneland on April 15.

“I was around the horse when he ran at Oaklawn and he's just a really nice horse,” said Odintz. “Professional, tall, he has a long stride and he knows what he's doing. He can be tough to saddle in the paddock sometimes, but doing everything else, he's a beautiful horse to be around.”

McPeek, who saddled Sarava to an upset victory over Triple Crown hopeful War Emblem in 2002, is expected to be on hand for the colt's final work before the Belmont, tentatively scheduled for Tuesday.