‘It Doesn’t Get Any Better Than This’: Thomas’ By My Standards Sparks Derby Fever 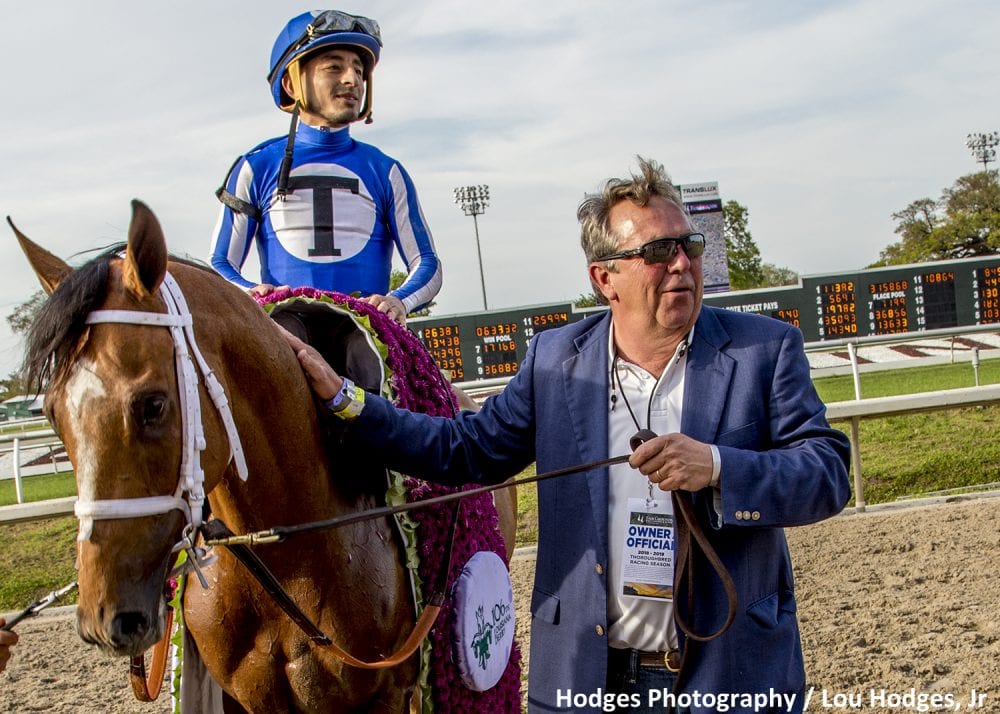 Chester Thomas leads By My Standards into the winner's circle after the 106th running of the grade II $1,000,000 Louisiana Derby. Hodges Photography / Lou Hodges, Jr

Chester Thomas of Madisonville, Ky., is headed to the Kentucky Derby after his 3-year-old colt By My Standards captured Saturday's $1 million Twinspires.com Louisiana Derby by three-quarters of a length over Spinoff, paying $47 to win under jockey Gabriel Saez. The Grade 2 stakes saw 4-5 favorite War of Will struggle home ninth after pulling a hind-end muscle shortly after the start.

Thomas lives 40 minutes from Ellis Park, which the businessman and entrepreneur considers his hometown track and where he is a two-time leading owner. He hooped and hollered as he led By My Standards in tight circles on the track before bringing him into the Fair Grounds Race Course winner's circle.

“We're going to see you at the Derby!” he yelped while giving Churchill Downs clerk of scales Javier Torres, who came up during Thomas' post-race interviews to offer congratulations, a spontaneous bear hug. “What about that?”

“How do you put this in perspective with such a short amount of time?” he said minutes after the race. “Really, it hasn't sunk in yet. My father started taking me to the track when I was 6 or 7. I quit college to become a jockey's agent in 1981 or 1982. I don't know. Life is good right now. It doesn't get any better than this.”

By My Standards capitalized on his one shot to make the May 4 Kentucky Derby at Churchill Downs. Starting his career last November 24 at Churchill Downs, he earned his first victory over fellow maidens on his fourth attempt on the day of the Fair Grounds' Grade 2 Risen Star Stakes won by War of Will.

The jump from maiden to major stakes was a route Thomas and trainer Bret Calhoun also took with Mr. Money, who in that next start finished fourth in the $2 million Breeders' Cup Juvenile last fall. Mr. Money also ran in the Louisiana Derby, finishing fifth.

“Usually that's not our move,” said Calhoun, who won his biggest race with a 3-year-old colt and is looking at his first Kentucky Derby. “You kind of see what they're up against, and if you're confident in the horse you've got to take a shot. And this was the last shot to get to the Derby. Chester has been great. He's let me do what I needed to do at every point. If the horse needs time, it gets time. 'Don't push this spot or that spot.' I asked him to supplement the other horse for $100,000 to the Breeders' Cup. He never hesitated, and the horse rewarded us. He's really made my job easy.

“This was my idea. Chester was on board. Our biggest concern was not getting in. We thought it might overfill and we wouldn't get in.”

The Louisiana Derby's 11 entrants were one shy of capacity. Anything over 12 and By My Standards would have been excluded under the stakes' preference criteria.

“We've been pretty excited about him all along,” Calhoun said.“I think the maiden win was definitely crucial for him. When he was third the time before he broke his maiden, it was a very disappointing race for us. It looked like he had the race in his control and just didn't finish them off. We didn't know where we were going from there, honestly. He bounced back and put them away in his next effort, and that's when the lightbulb really came on. He was a different horse in the mornings from that point on. His breezes were unbelievable — some fast works there, and none of them were intentional.

“I knew were up against it,” he said of the 1 1/8-mile Louisiana Derby, which By My Standards won in 1:49.53. “I didn't know exactly how we were going to stack up with those kinds of horses. But we knew our horse was doing very, very well and deserved a chance. He had to have a good trip and he had to be good enough. That's where I thought we were. We got both of those.

“A lot of horses have done a lot at 2 and don't show up at 3. This is the kind of horse that excited us, knowing he was getting better all the time and hadn't peaked yet. You hope he just keeps moving forward, and hopefully we have another good one the first Saturday in May.”

Noting the Kentucky Derby's 1 1/4-mile distance, Thomas said: “I think he can get the distance. He's a strong closer. He's got a great mind, he's smart and we've got a great team.”