Gaffalione Responds To West’s Allegations: ‘Never Did I Bump Or Push Anyone’ 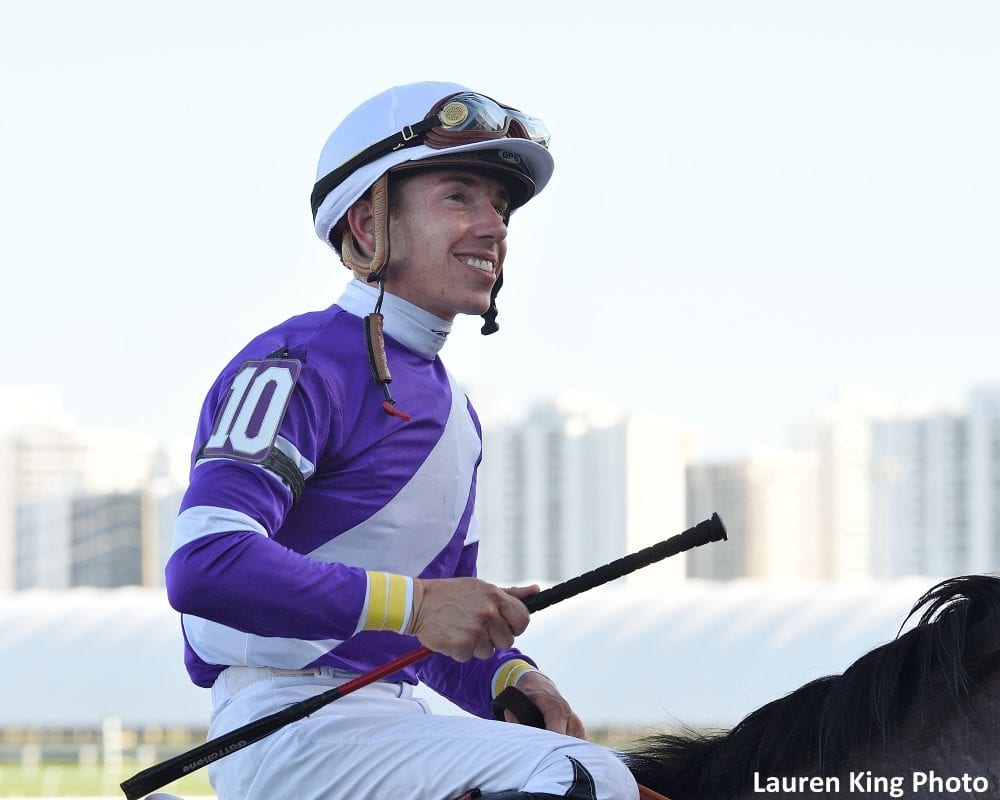 On Monday, Maximum Security's owner/breeder Gary West pointed to a frame-by-frame video of the Kentucky Derby as “evidence” to challenge the stewards' disqualification of his colt, suggesting that the entire incident was precipitated by the actions of War of Will and jockey Tyler Gaffalione.

Gaffalione took to Twitter on Tuesday to respond to West's allegation, explaining: “I took the spot (Maximum Security) vacated. Never did I bump or push anyone.”

Look at the strip of water. In the first picture MS is inside. Second picture MS comes out herding LRT and BE. Third and fourth photo show that MS comes back in and I took the spot he vacated. Never did I bump or push anyone. pic.twitter.com/DmxIFHxp2K

After the race, Gaffalione told War of Will's trainer Mark Casse that he “nearly went down” during the incident, but Casse ultimately decided not to have his jockey file a claim of foul.

“You have to remember… we're only seeing a little bit of (the race live),” Casse told media on Sunday. “I didn't really realize what happened. Tyler came back and said 'I almost went down' and I said to him 'It's not worth it. We were (eighth).' If we had finished fourth or third or second, we would have been claiming foul in an instant.

“Was it unfortunate? Absolutely. But you realize…if I claim foul, it ruins the biggest accomplishment in (Servis') life and the only thing that's going to do is move me up to sixth. Would you claim foul? No. Should Tyler have claimed foul? No. I stand by that.”

War of Will's owner Gary Barber released the following statement to the media on Tuesday evening:

“It has recently been brought to my attention that Mr. Gary West stated on Fox News that my horse War of Will caused the infraction in the Derby. I categorically deny this false accusation. The video evidence irrefutably shows that his horse, Maximum Security, caused a major infraction that almost led to a catastrophe and in doing so, denied my horse and others of a better placing.

“The facts are Maximum Security is a great horse that crossed the line first in the Derby, but unfortunately committed a major infraction that denied him a Derby victory. I empathize with Mr. West on this fact and feel the pain of losing out, but Mr. West's horse, and not mine nor my jockey Tyler Gaffalione, denied him the Derby victory and it is wrong for him to deflect blame anywhere else.

“I am very disappointed that War of Will was deprived of the opportunity to show his best because of Maximum Security, but I painfully accepted that as part of horse racing. Thankfully, I am glad both War of Will and Maximum Security survived the day unscathed and will be good to race another day!”

The Kentucky Horse Racing Commission is scheduled to have a meeting with the West's racing manager Ben Glass on Thursday, during which Glass expects to review the NBC-provided video angle. Glass was unsure whether the Kentucky stewards had access to this angle while making their decision, according to Horse Racing Nation.