Baffert On His Terrific Trio: ‘I Cannot Separate Those Horses Right Now’ 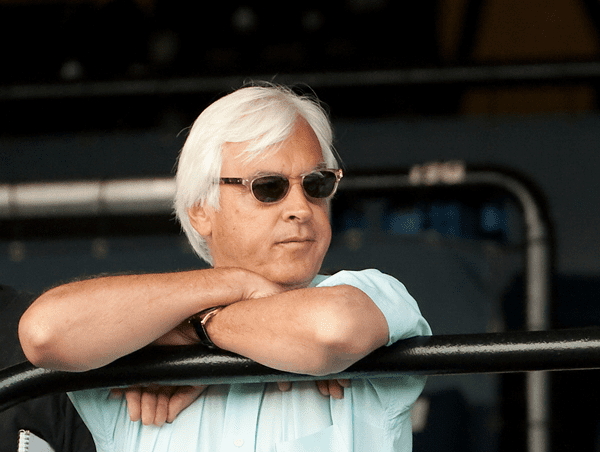 Once upon a time, Bob Baffert was a Quarter Horse jockey. It was his success (or lack thereof) in that profession that led to his current career path as a Hall of Fame Thoroughbred trainer. Figuring that the fires still may burn within the 67-year-old Arizona native to ride fast horses, we asked the question that many in racing would like to know: Which of his three undefeated 3-year-olds – Grade 2 San Felipe winner Authentic or Saturday's winners of the G1 Arkansas Derby divisions, Charlatan or Nadal – is best? Who would he pick to ride in the G1 Kentucky Derby?

“Too far for me,” Baffert said of the mile and a quarter Derby, artfully dodging the question.

Baffert will tell you he was at his best during his riding days at 550-yard straightaway races at the Rillito racetrack in Tucson, Ariz., a seldom run distance in the Quarter Horse game. Mile and a quarter contests are rare in Thoroughbred racing, too, but Baffert seems to have found his best stride at that distance, winning five Kentucky Derbies and three Breeders' Cup Classics going that route.

But really, Bob, which one do you think is best?

“I asked my exercise rider, Juan Ochoa, that same question,” Baffert said. Ochoa has been on all three colts in the mornings.

“He says, 'I don't know, Bob. It's like you introduce me to three Miss Universes and you ask me which one I want to go out with.'”

“I cannot separate those horses right now,” he said. “I really couldn't tell you – even off the record. They're three really talented horses and they're all different. Charlatan is all speed like Justify was. Nadal just won't go away. And Authentic just floats over the ground.”

Baffert celebrated his two Arkansas Derby wins Saturday night at his Southern California home, feasting with his family on steaks, mac and cheese and butter pie sent to him by restaurateur Jeff Ruby. Baffert had mentioned during racing telecasts that he'd rather be in Louisville on the first Saturday in May, celebrating a Kentucky Derby at Jeff Ruby's Steakhouse.

Sunday morning it was back to the track to oversee a five-furlong workout by Authentic, who Baffert is planning to run in the G1 Santa Anita Derby, tentatively scheduled for June 6 if the track gets the go-ahead to resume racing from the Los Angeles County Department of Health.

Authentic, a son of Into Mischief, broke his maiden first out at Del Mar Nov. 9, then won the G3 Sham Stakes Jan. 4. He took the San Felipe on March 7 by 2 ¼ lengths over Honor A.P., a highly regarded colt in John Shirreffs barn. Authentic breezed twice after the San Felipe, then went nearly a month without a recorded workout, from March 29 to April 27.

On Sunday Authentic went five furlongs in a solo drill in 1:00.40.

“I gave him a little break when they shut down racing (at Santa Anita),” said Baffert. “He's a May foal. He always goes alone. He's the kind of horse that might get a little too racy. He'd been too aggressive working in company.”

Charlatan and Nadal typically have workmates during their breezes.

“I work the other horses in company to get them to stay with another horse, teach them to relax,” Baffert said. “I was harder on Nadal than Charlatan because he's a heavier horse. Authentic doesn't need to be trained as hard as those other horses. He's narrower and lighter. More like Arrogate was. Authentic just floats over this racetrack.”

Charlatan and Nadal “came back great, ate up good,” Baffert said. Both went fast in their victories, Charlatan in 1:48.49 for the 1 1/8 miles and Nadal slightly quicker, in 1:48.34. You'd have to go back to 2003 and Sir Cherokee to find a faster Arkansas Derby. Tentative Beyer Speed Figures were 98 for Nadal and 96 for Charlatan. The latter earned a 106 for his allowance win at Santa Anita on March 14. Nadal's 98 Beyer equaled the number he earned in his maiden score Jan. 19.

“The filly was a little bit tired, but that was only her second race,” he said in reference to Gamine, a daughter of Into Mischief who scored a hard-fought allowance win over Speech, a Michael McCarthy trainee coming off a good second to Donna Veloce in the G3 Santa Ysabel.

Baffert's Oaklawn brigade is scheduled to fly back to Santa Anita on Monday.

With so much uncertainty in racing because of the shutdowns from the coronavirus pandemic (i.e., neither the Preakness nor Belmont Stakes have been rescheduled from their original dates), Baffert said he is circling Sept. 5 on the calendar – the new date for the Kentucky Derby – and backing up from there.

“If the (Kentucky) Derby had been yesterday, Nadal would have been perfect,” said Baffert. “He had that six weeks from the Rebel. As long as you can get one solid race into them before Sept. 5, that's what I want. It's tricky. We're all in uncharted waters. I brought Arrogate along that way, knowing he wasn't going in the Classics. I shot for the Travers and backed it up from there.

“Right now, I'm waiting to see,” he said. “Nobody knows. Nothing's set in stone. I'd like to keep them all separated as much as possible and you don't want to do too much shipping.

Baffert hopes racing in California, Maryland and New York are allowed to resume soon. He and his wife, Jill, took part in a demonstration in front of the Los Angeles County Board of Supervisors building last week to raise awareness of how important racing is to the health and welfare of backstretch employees and horses.

“Everyone's changing the way we do things,” he said. “We're all learning to keep our distance, wear masks, wash our hands all the time.”