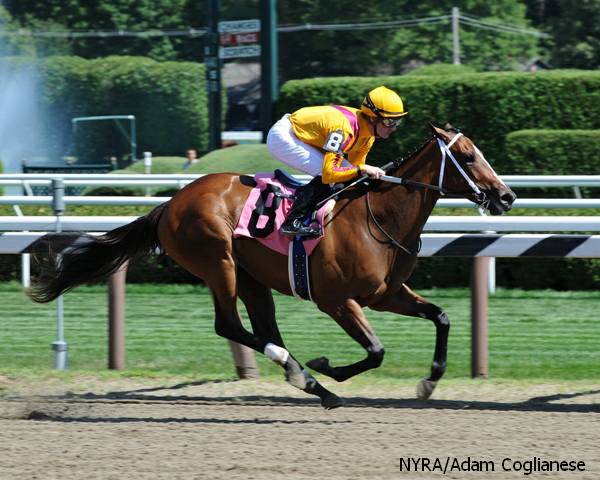 A swarm of reporters descended upon Saratoga Race Course winner's circle after Teen Pauline broke the five-furlong track record in her debut, a maiden special weight for 2-year-old fillies.

“She's special. She really is,” trainer Steve Asmussen responded when asked if he expected his charge to set a track record.

Owner Barbara Banke of Stonestreet Stables felt no need to hold back her opinion.

“The answer from me is 'yes,'” Banke said with a grin.

Teen Pauline validated Banke's confidence by dueling with Gadget Girl for early supremacy, wresting command with two furlongs to travel, and needing only a few shakes of the reins from Julien Leparoux to scoot clear to a 4 3/4 length score. My Happy Face, the runner-up, was 10 1/2 lengths clear of third-place finisher Gadget Girl.

“We think she's 19,” said Banke, explaining the “Teen” aspect of the name.

“As Barbara mentioned, she's good enough to be named for her mother, so I think that definitely indicates their expectations of her,” said Asmussen. “She came up from Churchill, had a very easy move over at Oklahoma and two easy breezes after that, and I thought she was spot-on and the timing [of this race] would be perfect for her. We just want this to be the first step in a very successful career.”

Stonestreet purchased Teen Pauline in utero when they bought her dam, Effectual, in foal to Tapit for $475,000 at the 2009 Keeneland November sale. Effectual won the Grade 3 Debutante at Churchill Downs as a juvenile and has one other foal of racing age, No La Hace, who has four wins in five starts, all in claiming races.

Teen Pauline is the second New York Watch performer for Stonestreet so far during the 2012 Saratoga meet. On Friday, Kauai Katie joined the list after debuting a 12-length winner for trainer Todd Pletcher.