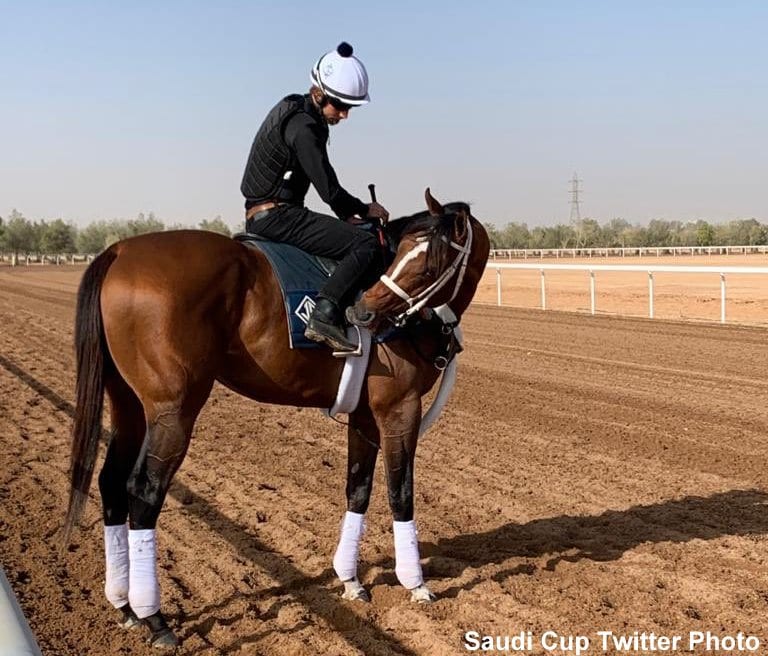 The question almost always arrives, both in the aftermath of great achievement and during the preparations for another grand task. And for all the challenging things horsemen often have to find answers for, it's one query they are usually happy to try and dissect.

Whenever trainers are fortunate enough to have a horse with beyond-the-norm talent, a common inquiry is to ask when it crystallized for them that they were dealing with something special. In the case of champion Maximum Security, there are any number of glamorous moments that stand out — most notably the three Grade 1 triumphs that helped backstop him to divisional honors in 2019.

Where he could have pointed to the time his charge led every point of call in the Florida Derby, or the time he shrugged off oppressive heat in the Haskell Invitational, or even the time he made older foes look common in the Cigar Mile, trainer Jason Servis says it was a lower-key test that caused him to be overwhelmed by what the son of New Year's Day was capable of. The betting public may have expected Maximum Security to do exactly as he pleased in winning the Grade 3 Bold Ruler Handicap last October. But for Servis, the reality of what he had hit him square between the eyes during that seven-furlong race.

“When he ran in the Bold Ruler, I really wasn't expecting that kind of race. I was a little taken aback,” Servis said of the colt's 1 ¾ length win in his first outing since suffering an acute bout of colic in September. “I think even as good as he is, the light came on with me that day where I was like, man, he went seven-eighths in (1:20) and change. I wasn't all that thrilled with him (going in). He was in the one hole, the worst post, and he was still just like 'See you later, boys'.

“I was like, daggone. I got a little emotional after that and I think that's what did it. I got a lot of satisfaction at the end of the year with everything we had been through.”

The saga that was Maximum Security's sophomore season has been debated at a painstaking level, which makes that lack of variance in the conclusions reached all the more impressive. By the end of 2019, there was little arguing the bay colt had the best resume of his class with six wins from eight starts and only one race where a horse actually beat him to the wire first.

Barely a month after earning the 2019 Eclipse Award for champion 3-year-old male, Maximum Security will take the first step toward rebranding himself as the top older horse in training. The Gary and Mary West homebred is set to make his seasonal debut in the inaugural running of the $20 million Saudi Cup at King Abdulaziz Racetrack on February 29.

The multi-million dollar carrot the Saudi Cup dangled has successfully gathered some of the best handicap contenders from North America with fellow Eclipse Award champion Midnight Bisou, freshly-minted Pegasus World Cup winner Mucho Gusto and multiple Grade 1 winner McKinzie among those set to join Maximum Security in the 1 1/8-mile race. Having already defeated older horses in the final two starts of his 3-year-old season, the star-crossed colt is expected to vie for favoritism when he tests his front-running ways in the one-turn race.

Fact is, Maximum Security has spent the majority of his career with a target on his back. And in both of his career losses from nine career starts, he was his own biggest obstacle.

History will replay the surreal scene that was the 145th Kentucky Derby for the ages as Maximum Security became the first horse disqualified from victory in the first leg of the Triple Crown because of interference, an action making the now-retired Country House the official winner. The only salve Maximum Security's connections could hope for moving forward was that their colt's talent would ultimately silence any debate over who was the best of that generation. In his first outing following that infamous incident on the first Saturday in May however, Maximum Security did himself no favors when he stumbled at the start of the June 16 Pegasus Stakes at Monmouth Park and ended up finishing second to upstart King for a Day.

Trouble kept finding its way into Maximum Security's path during the second half of 2019, but the colt's resolve kept turning the tables in his favor. The extreme heat that canceled a portion of Monmouth Park's July 20 Haskell card and pushed the headline race back for hours didn't prevent Maximum Security from notching his second career top-level win – beating Mucho Gusto and eventual Breeders' Cup Dirt Mile winner Spun to Run in the process. When he had to miss the Grade 1 Pennsylvania Derby after being rushed to the Mid-Atlantic Equine Clinic due to a colon entrapment, Servis was forced to call an audible on the rest of the colt's sophomore season.

That Maximum Security answered the bell with emphatic victories in the Bold Ruler and the December 7 Cigar Mile reinforced to Servis that he had led over the best horse at every point of call during the year.

“People have asked me 'That must have killed you, the Kentucky Derby and all'. Of course it was a blow. But I don't know, for some reason it's not something I dwelt on,” Servis said. “And I think I got some satisfaction out of knowing I brought that horse to the race in the right way. Some of the races I ran in weren't necessarily by design. I was dealt what I was dealt with, with the clinic and the hot weather on Haskell day. So I did the best with what I had dealt to me.

Even with a deal in place to stand Maximum Security at Coolmore Stud upon his retirement, his connections say the plan was always to see how good the colt could be as an older horse. As a May foal, he is just now coming into his physical peak, according to Servis. He won't deviate from his one-race-at-a-time attitude and commit to anything beyond next Saturday's journey, but Servis has seen enough to know there aren't many challenges his exceptionally special runner won't be up to.

“We'll get through the Saudi Cup and then everyone get their heads together and decide what we need to do. It will be interesting,” Servis said. “He's gotten a little tougher looking. I think anyone who saw him in Kentucky would see a difference in him now. He's gotten older and more seasoned, and I think a trained eye would see that.”

Alicia Hughes is director of NTRA Communications and an award-winning turf writer. She previously served as racing editor and staff writer for The Blood-Horse following 11 years covering horse racing for the Lexington Herald-Leader.