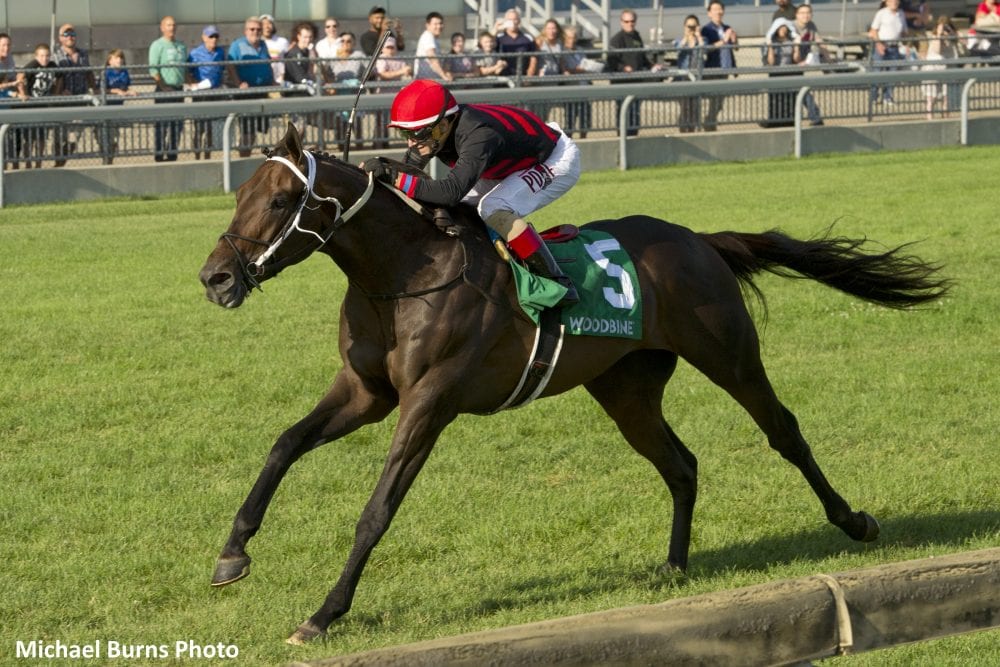 L and N Racing's Tone Broke closed out the OLG Canadian Triple Crown with his second victory in the series for Canadian-foaled three-year-olds by taking the 128th running of the $400,000 Breeders' Stakes under Woodbine's leading jockey Rafael Hernandez on Saturday.

Following his Prince of Wales Stakes victory over 1-3/16 miles on the dirt for the middle jewel of the tri-surface series, Tone Broke returned to Woodbine where he had hit the board in the million-dollar Queen's Plate opening leg over 1-1/4 miles on the Tapeta.

Despite tossing his head at the start and running into some traffic trouble in his turf debut, Tone Broke was able to relax and stalked the pace, waiting patiently to pounce in the long stretch.

“He played around a little bit with the head before the start. My gate crew did a great job. He tried to straighten him up, but they opened the gate so quickly and he just came out with the head high,” said Hernandez, who picked up the mount which turned into his third Breeders' Stakes victory. “He gave me a hard time to relax him, but by the first furlong he was relaxed good.”

Seguimi established the early lead through a :25.26 opening panel before supplemental entry Rising Star took over command through a half-mile in :50.59, three-quarters in 1:15.97 and one-mile in 1:41.07. Meanwhile, Tone Broke stalked the leaders with Pay for Peace to his outside.

“I was okay all the way, just at the three-eighths [pole] I had to wait, you know, I was stuck there,” said Hernandez. “I tried to move out a little bit and the six-horse [Pay for Peace] wouldn't give up, he stayed there. I've got a big horse – he's got a big heart – I thought I could move a little bit and it would be okay, but he never gave up and stayed there.”

Avie's Flatter and He's a Macho Man went wide and shot to the lead off the turn past the 1-1/4-mile mark in 2:05.95, but patience paid off for Hernandez as he found a clear path for Tone Broke in the stretch. The Broken Vow-Mendocino Beano colt powered past the Carroll duo late to win by 1-1/2 lengths in a final time of 2:30.43 over yielding turf.

“It's a good thing we have a long stretch,” said Hernandez. “All you have to do is be patient. I used my patience and as soon as I put him clear, he did the rest. He has a big heart.

“It's not how you start, it's how you finish,” noted the 34-year-old reinsman, who previously won the 2015 Queen's Plate with Shaman Ghost and won the Breeders' Stakes in back-to-back years with Camp Creek (2016) and Channel Maker (2017).

“It looked like it was going to be a replay of the Queen's Plate [when he broke inwards] a little where he didn't want to relax early and Raffi got him to relax and everything went smooth,” said Darren Fleming, assistant trainer to Asmussen. “We had a little traffic trouble and my heart was pumping in the turn, but luckily Tone Broke was talented enough to overcome it.”

Tone Broke ended Queen's Plate champion One Bad Boy's hopes at Triple Crown glory when he won the Prince of Wales Stakes on July 23 in rein to Ricardo Santana Jr. The last Triple Crown winner was the Michael Keogh-trained Wando in 2003.