Time And Motion Prevails By A Head In QEII Cup 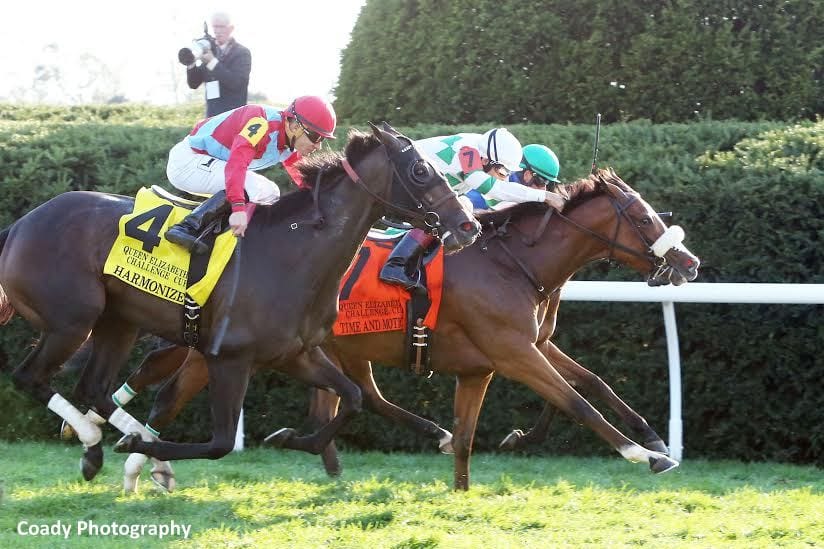 John Phillips' homebred Time and Motion was hard pressed to get up and win Saturday's Grade 1 Queen Elizabeth II Challenge Cup at Keeneland, surging in the final strides to get her head in front in a three-way photo for the win. Ridden by John Velazquez for trainer James Toner, the daughter of Tapit defeated a field of seven other sophomore fillies, including Catch A Glimpse, registering a final time of 1:50.24 for nine furlongs on the firm turf.

“You don't know how big this is,” Toner said. “This is my third time for [the Phillips family]. It's been 20 years since Memories of Silver won. I was hoping I didn't have to wait another 20 years. It was today or God knows when.”

Catch A Glimpse, undefeated in eight starts on the turf until Time and Motion got the best of her last out, took out for the lead leaving the gates, with Hawksmoor for company right on her flank. Stays in Vegas and Queen Caroline moved in unison in third position, with Time and Motion just behind them in fifth. Catch A Glimpse set a strong early pace, clocking fractions of :22.99 and :47.46 as Hawksmoor refused to let up the pressure. Nearing the end of the backstretch, Time and Motion began trying to thread her way between Stays in Vegas and Queen Caroline, but the hole was a bit too narrow and she was forced to angle to the outside.

Hawksmoor moved up alongside Catch A Glimpse mid-way through the turn, and put her head in front at the top of the lane. Time and Motion had to go three-wide into the stretch, but found Hawksmoor very game when arriving in mid-stretch. Velazquez kept grinding away aboard Time and Motion, though he saved his strongest effort for the final 70 yards when he carried her past that rival to get her head in front on the wire. Harmonize was moving very strongly late from sixth, and was just able to make her presence felt in the photo finish but had to settle for second over Hawksmoor. Back in fourth was On Leave.

“I thought I had the horse,” Velazquez said. “When I got to the horse in front of me (Hawksmoor), my horse didn't want to pass; she wanted to stay with her. 'No, Mommy. Come on. Stay on it. We gotta pay attention here.' That other horse (Harmonize) came on the outside of us, and that's what made her go forward. It was worth it.”

Bred in Kentucky by her owner, Time and Motion did not break her maiden until the start of her 3-year-old season, though she managed fifth in the Breeders' Cup Juvenile Fillies Turf last fall. After her first win, the filly recorded back-to-back listed stakes victories, only to run second to Catch A Glimpse by a half-length in the G1 Belmont Oaks Invitational. Next out in the G2 Lake Placid Stakes at Saratoga, Time and Motion turned the tables on her rival to win by neck. Saturday's win is Time and Motion's first G1 win, and brings her career record to five wins from nine starts, with earnings of over $900,000.