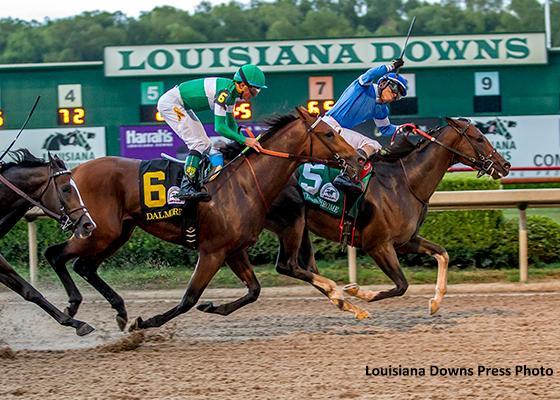 Caldwell said Texas Chrome returned to his barn around Feb. 7 after being freshened at owner Danny Keene's nearby training center. The horse hasn't started since a ninth-place finish in the $1 million Breeders' Cup Dirt Mile (G1) Nov. 4 at Santa Anita.

“The little time off, he grew up,” Caldwell said. “He's physically stronger. He's come back perfect.”

Caldwell said the Oaklawn Handicap “is on the back of our agenda,” adding the Texas-bred son of Grasshopper would go straight into the 1 1/8-mile race off works. Caldwell said Texas Chrome is scheduled to begin breezing in March.

Texas Chrome was named 2016 Texas Horse of the Year by the Texas Thoroughbred Association after winning 4 of 8 starts, including the $400,000 Super Derby (G3) Sept. 10 at Louisiana Downs and $400,000 Oklahoma Derby (G3) Sept. 25 at Remington Park. His campaign began with a third-place finish in last April in Oaklawn's $150,000 Bachelor Stakes.

In addition to the Super Derby and Oklahoma Derby, Texas Chrome won the $75,000 Texas Stallion Stakes May 15 at Lone Star Park and the $100,000 Super Derby Prelude Stakes Aug. 6 at Louisiana Downs.

Keene purchased Texas Chrome for $10,000 as a yearling. He has since bankrolled $842,462, with eight victories from 14 lifetime starts.