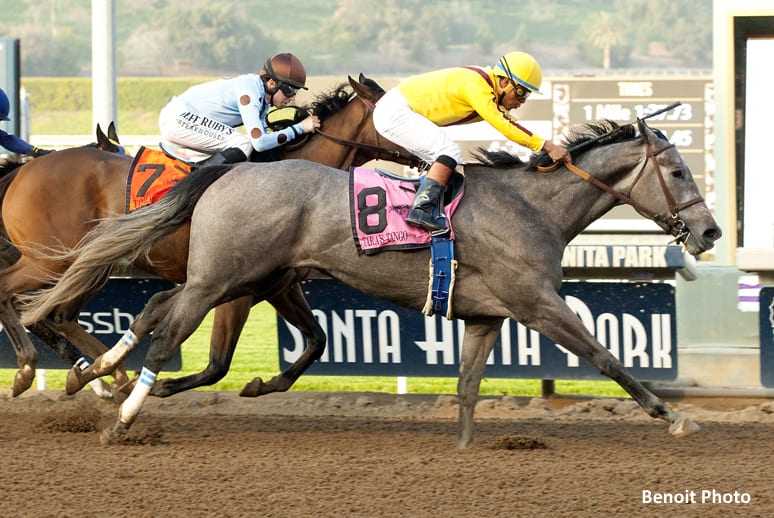 Stonestreet Stables' Tara's Tango was able to out-finish Yahilwa on Saturday, getting up just in time to win the Grade 2 Santa Maria. The 4-year-old daughter of Unbridled's Song earned her first graded stakes victory, covering the 1 1/16 miles over Santa Anita's fast main track in 1:44.48.

Big Break lived up to her name, bursting out of the starting gate to a one-length lead over the field for the first hundred yards, until she was over taken by the triumvirate of Yahilwa on the lead, then Living the Life and Tara's Tango on the outside. Those three covered the first quarter in :23.64, at which point a rank Birdatthewire swept around the pack to move into second on the outside, prompting the half-mile in :46.97.

“She just ran off,” Smith said of Birdatthewire. “She wouldn't load today; she was really leaning against the back of the gate so that when he kicked it, she got off slow. She got up and there was only one thing on her mind and that was 'get to the front.'”

Living the Life grabbed the lead at the three-quarter mark, stopping the clock in 1:11.95 with Yahilwa and Birdatthewire in close pursuit, with Tara's Tango shuffled back to fourth but only a length off the lead. At the top of the lane, Yahilwa and Living the Life were vying for the lead with Tara's Tango pushing back with massive strides on the outside. Martin Garcia timed his finishing rush perfectly to nail that pair on the wire, relegating Yahilwa to second by a half-length and Living the Life to third.

“She has two-turn speed,” said Garcia. “She just cruises and she's consistent. This suits her.”

Bred in Kentucky by Stonestreet Thoroughbred Holdings, Tara's Tango is out of a stakes-placed daughter of French Deputy. Her victory in the Santa Maria improved her record to 3-3-1 from nine starts for trainer Jerry Hollendorfer, and boosted her bankroll to over $310,000.

“We thought she could route,” said Hollendorfer, “because she did run against the Eclipse Award winner (Stellar Wind). I was a little distressed when she came away from the gate slower than we wanted her to, but Martin got her into a good position right away.”