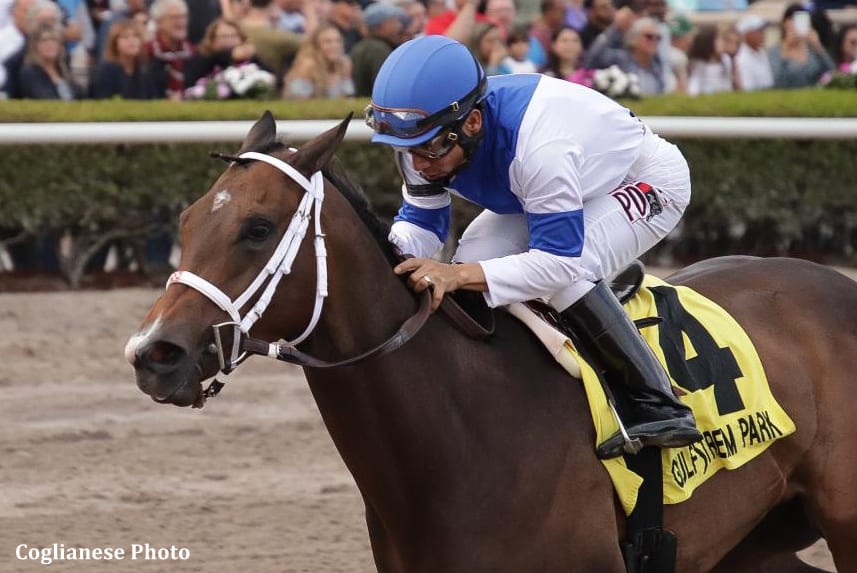 The 48th running of the 1 1/16-mile Oaks is one of six stakes, four graded, worth $1.3 million in purses on the undercard of the G1 Xpressbet.com Florida Derby, one of the country's premiere Triple Crown preps.

Take Charge Paula had a three-race win streak snapped when second in the one-mile G2 Davona Dale March 3 at Gulfstream. Prior to that she won the seven-furlong G3 Forward Gal Feb. 3 and the six-furlong House Party Dec. 9 to cap her 2017 season.

Go Noni Go has won two of her last three starts including the G3 Bourbonette Oaks on the synthetic surface at Turfway Park last out. Daisy won the one-mile G3 Tempted in her second start and most recently was second in the 1-mile, 40-yard Suncoast Stakes Feb. 10 at Tampa.

Blonde Bomber has been off the board in two starts since finishing a rallying third in the G1 Breeders' Cup Juvenile Fillies Nov. 4 at Santa Anita, running fifth in the Suncoast. Princess Warrior, fourth by three lengths in Gulfstream's G3 Herecomesthebride on turf March 3, was second in the G1 Alcibiades last fall.

Always Dreaming, winner of the 2017 Florida Derby and G1 Kentucky Derby but unraced since running ninth in the G1 Travers last August, tops 17 nominees to the G2 Gulfstream Park Mile for 4-year-olds and up, joined by multiple graded-stakes winners Irish War Cry, Tommy Macho and Page McKenney and graded winners Mr. Jordan and Tower of Texas.

Grade 1 winner Sadler's Joy is nominated to defend his title in the G2 Pan American for 4-year-olds and up at 1 ½ miles, along with fellow Grade 1 winners Bigger Picture, Bullards Alley, Hi Happy and Wake Forest.

On Leave and Ultra Brat, both graded winners over the Gulfstream Park turf course, return among 14 nominees to the G3 Honey Fox for fillies and mares 4 and up going one mile. Grade 3 winners Grizzel and Lull are also nominated.

Also on the Florida Derby Day program are a pair of $150,000 turf stakes going one mile, the Cutler Bay for 3-year-olds, which drew 19 nominations led by Grade 3 winner Maraud, and the Sanibel Island for 3-year-old fillies, whose 17 nominees are led by multiple Grade 3 winner Thewayiam.