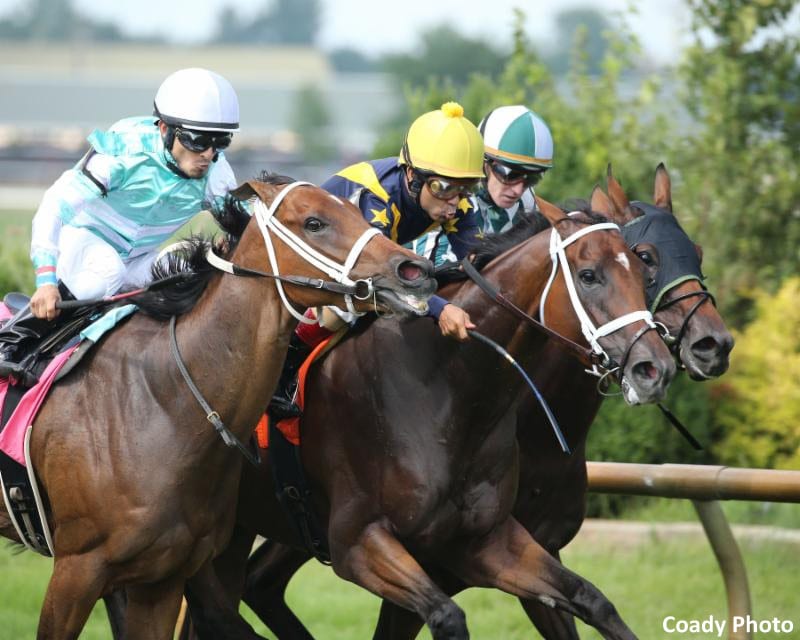 Stave, on the outside under Gabriel Saez, finished second in a three-horse photo won by Sensitive (middle) and with Valentine Wish third in the Ellis Park Turf

Trainer Larry Jones was disappointed when Hinkle Farms' Stave came a head shy of winning her first career stakes in the $75,000 Ellis Park Turf on July 7. But the 4-year-old filly gets another crack at becoming a stakes-winner in Sunday's $100,000 Kentucky Downs Preview Ladies Turf.

“It was close. It was a good race,”Jones said after Stave had to settle for second in a three-horse photo won by Sensitive. “We're going to have to be happy, I guess. We had intended to win, but we didn't make it.”

Stave shouldn't have to contend with Sensitive on Sunday, as that mare is expected to wait for the $500,000, Grade 3 Kentucky Downs Ladies Turf on Sept. 7. But Valentine Wish, third in the Ellis Park Turf's mad dash to the wire, is considered probable for Sunday's stakes.

Jones had taken a conservative approach with Stave, running in a pair of allowance races at Churchill Downs before getting serious about stakes competition.

“She's doing well, and that was just her third race coming off the long winter layoff,” he said Monday morning at Ellis Park. “She's about as good as we're going to be able to get now, so she's good to go. We're looking forward to that, and hopefully that will serve as a prep for the Kentucky Downs race.

“It's a wonderful thing,” Jones said of Ellis Park's Kentucky Downs Preview Day, which is in its second year. “It does get everybody ready for Kentucky Downs. I think they (the tracks) have worked together very well getting this program together. It's really enticing.”

Entries for Sunday's racing program will be taken and the fields drawn on Thursday.