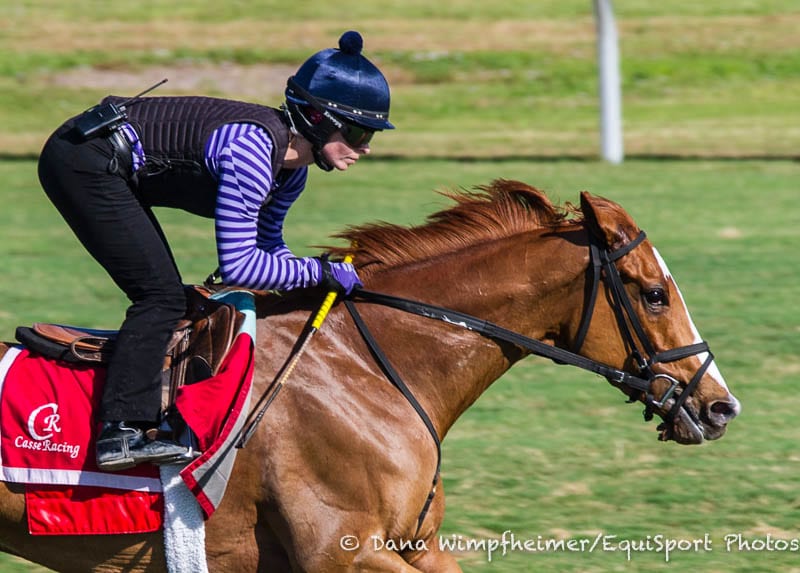 Catch a Glimpse working at Palm Meadows earlier this year

Sheep Pond Partner's brilliant mare Lady Eli will make her 2017 debut Saturday when she headlines a field of eight fillies and mares entered for Saturday's 29th running of the $350,000 Coolmore Jenny Wiley (G1),

Trained by Chad Brown, the 5-year-old Lady Eli will be making her first start since a nose defeat in the Breeders' Cup Filly and Mare Turf (G1) at Santa Anita in November. The daughter of Divine Park has compiled a record of 9-7-2-0 with Grade 1 victories coming each year that she has competed.

Lady Eli missed nearly 14 months of racing as she battled back from laminitis to returned to competition last August with a runner-up finish in the Ballston Spa (G2) at Saratoga and a victory in the Flower Bowl Invitational (G1) prior to the Breeders' Cup.

Irad Ortiz Jr. has the mount on Lady Eli and will break from post position one. In her lone Keeneland start, Lady Eli won the Appalachian (G3) in 2015 to kick off her 3-year-old campaign.

Included in the field are three other Grade 1 winners: Catch a Glimpse, Time and Motion and Illuminant.

Trained by Mark Casse, Catch a Glimpse will be ridden by Florent Geroux and break from post position three.

The Phillips Racing Partnership's homebred Time and Motion will be making her first start since finishing sixth in the Matriarch (G1) at Del Mar in December. Prior to that, Time and Motion won the Queen Elizabeth II Challenge Cup (G1) Presented by Lane's End here.

Trained by James Toner, Time and Motion will break from post position six and be ridden by John Velazquez.

Trained by Mike McCarthy, Illuminant will be ridden by Flavien Prat and break from post position seven.