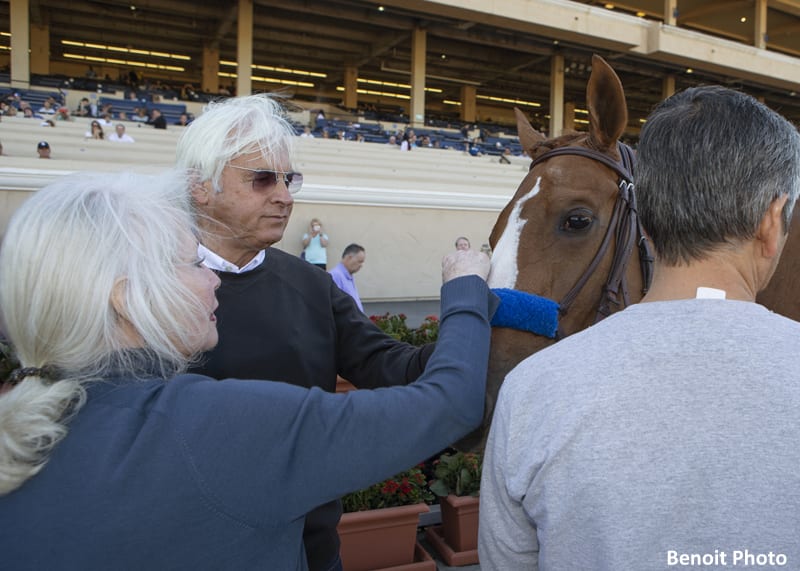 Owner Jane Lyon, left, and trainer Bob Baffert, second from left, have a moment with Chasing Yesterday after their victory in the $100,000 Desi Arnaz Stakes

The half-sister to Triple Crown champion American Pharoah, Summer Wind Equine's homebred Chasing Yesterday continues to build up her resume on the Southern California circuit. The 2-year-old daughter of Tapit captured Monday's Desi Arnaz Stakes at Del Mar by 1 1/2 lengths, fighting a strong headwind in the stretch to best the three-horse field. Ridden by Drayden Van Dyke and trained by Bob Baffert, the royally-bred filly completed seven furlongs on the fast main track in 1:23.81, paying $3.00 to win.

“She got away from there just a little bit awkwardly and we spotted them some,” Van Dyke said. “But that turned out to be a blessing. She got a little breather on the backside. Then that wind (coming into the stretch) was really bad. Comes right at you. But she's a good filly and she got it done.”

Lyon purchased American Pharoah's dam, Littleprincessemma, at the Fasig-Tipton Kentucky Fall sale in 2014 for $2.1 million, just after the colt had won both the G1 FrontRunner and G1 Del Mar Futurity; he would later be named the 2-year-old champion of that year.

Littleprincessemma was carrying a full brother to American Pharoah in utero at that sale, and the 2015 colt was named St. Patrick's Day. Under the ownership of Mrs. John Magnier, he won his second start at Del Mar under Baffert's care, and then was transferred to Aidan O'Brien and has not found the winner's circle in six subsequent starts.

Prior to Summer Wind's purchase, the mare foaled a 2011 colt named Xixixi (Maimonides) and a 2014 filly named American Cleopatra (Pioneerof the Nile). XiXiXi broke his maiden at Aqueduct for a tag of $25,000, and has compiled a record of 2-3-1 from 17 starts with earnings of $83,299. American Cleopatra won at first asking, then finished second in the G1 Del Mar Debutante before finishing off the board in her two final starts. She earned $98,519 on the track, and was entered in the Fasig-Tipton Kentucky Fall sale in 2017 in foal to Uncle Mo; American Cleopatra did not meet her reserve when bidding stopped at $1.9 million.

Littleprincessemma foaled Chasing Yesterday in 2016, and has a yearling full-brother to Pharoah and weanling colt by Tapit also on the ground. Chasing Yesterday has now won three of her four career starts, earning $144,250.

“She's matured a lot and she's starting to grow and she has been working great,” Baffert said of Chasing Yesterday. “I saw her get away third and for three horses this was a tough race. There's nothing easy about the races in California. She's only run one bad race and that wasn't her fault. I sent her back east when I should have kept her here for the Debutante. But hey, sometimes you call the play and it's a fumble.” 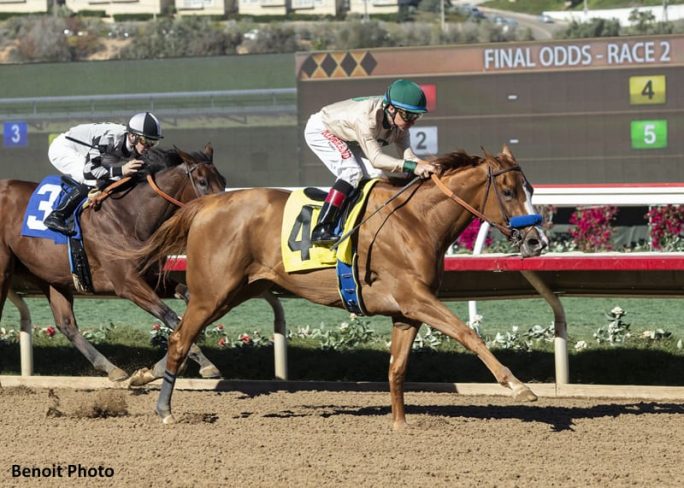