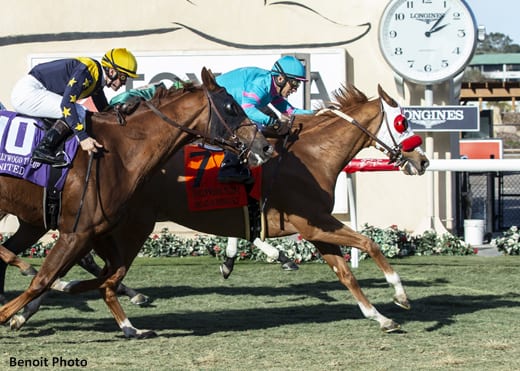 Separated by a neck when last they met, top turf marathoners Oscar Dominguez and United head a field of seven older horses going a mile and one quarter on turf in Saturday's Grade 2, $200,000 San Marcos Stakes at Santa Anita in Arcadia, Calif.

Claimed seven starts back for $40,000 on Feb. 7, 2019, the Richard Baltas-trained Oscar Dominguez appeared to run the best race of his career when he rallied from off the pace to outrun even money favorite United in Del Mar's G2 Hollywood Turf Cup at a mile and one half on Dec. 1.

Although he lost quite a bit of ground turning for home, Richard Mandella's United appeared to have every chance to overhaul “Oscar” on Dec. 1, but came up a neck short in a thriller.

Others who merit serious San Marcos consideration are trainer Phil D'Amato's Cleopatra's Strike, who comes off a narrow second place finish at a mile and one eighth on turf in the G2 San Gabriel Stakes Jan. 4, the venerable 8-year-old gelding Itsinthepost, a winner two starts back of the G2 Marathon Stakes on dirt Nov. 1, and Campaign, who has been idle since being eased as the 3-5 favorite in the same race.

OSCAR DOMINGUEZ – Owner:  Nancy Messineo and Bruce Sands; Trainer:  Richard Baltas
A 7-year-old Irish-bred gelding, he's flourished in Baltas' care, winning two out of his seven starts since claimed nearly a year ago, including his win at 11-1 in the G2 Hollywood Turf Cup. He's also managed a second place finish three starts back in the G2 Del Mar Handicap and another second in the G3 San Juan Capistrano Stakes four races back on June 23. Ridden by John Velazquez in the Hollywood Turf Cup Dec. 1, he'll get the services of Joel Rosario on Saturday and if he has the same kind of stretch kick at a mile and a quarter as he had at a mile and one half, he should be very tough to deny in the San Marcos.

UNITED – Owner:  LNJ Foxwoods; Trainer:  Richard Mandella
A 5-year-old gelding by Giant's Causeway, United's biggest claim to fame thus far is running a huge second, beaten a head by eventual Horse of the Year Bricks and Mortar in the G1 Breeders' Cup Turf at a mile and one half two starts back on Nov. 2.  Subsequently a fast finishing second, beaten a neck as the even money favorite in Del Mar's G2 Hollywood Turf Cup at the same distance, United will again be handled by Flavien Prat as he tries to turn the tables on Oscar Dominguez.  Third, beaten 1 ¾ lengths three starts back in the G2 John Henry Turf Championship at 1 ¼ miles on Sept. 28, United was a close second in his only other try at that distance.  Although he'd be best served by a fast early pace, United has the ability to sit close to the pace and should be able to adapt to any pace scenario.

CLEOPATRA'S STRIKE – Owner:Slam Dunk Racing and Michael Nentwig; Trainer: Philip D'Amato
A winner of the G2 John Henry Turf Championship three starts back here on Sept. 28, this 7-year-old Smart Strike gelding has also been second three times in his last five starts with D'Amato, dating back to Jan. 5, 2019.  Second as the 6-5 San Gabriel Stakes favorite Jan. 4, Cleopatra's Strike was surging at the end and could benefit from the extra furlong on Saturday when ridden back by Abel Cedillo.

ITSINTHEPOST – Owner:  Red Baron's Barn, LLC; Trainer:  Jeff Mullins
With eight out of his 11 career wins coming over the Santa Anita turf, Itsinthepost should relish the firm going here on Saturday as he seeks his ninth career graded stakes victory.  A non-factor at 6-1 in the G2 Hollywood Turf Cup at Del Mar Dec. 1, French-bred Itsinthepost, who won the 2018 San Marcos, has eight drills on his tab dating back to Dec. 11, with the last seven coming on Santa Anita's inner training track.  A winner of one out of his first five starts in France, Itsinthepost has enjoyed an outstanding career primarily with Mullins.  With an overall mark of 42-11-8-6, he has earnings of $1,384,604.

CAMPAIGN – Owner:  Woodford Racing, LLC; Trainer:  John Sadler
A two-time graded stakes winner at marathon distances on dirt, this 5-year-old full horse by Curlin broke his maiden in his third career start going a mile and one half on turf at Kentucky Downs on Sept. 1, 2018, and came back seven days later to win a 1 5/16 mile turf allowance there, with both wins coming from far off the early pace.  With eight works to his credit since eased as the 3-5 favorite in the G2 (dirt) Marathon Stakes on Nov. 1, Campaign's connections are confident a return to turf will be to his liking on Saturday.