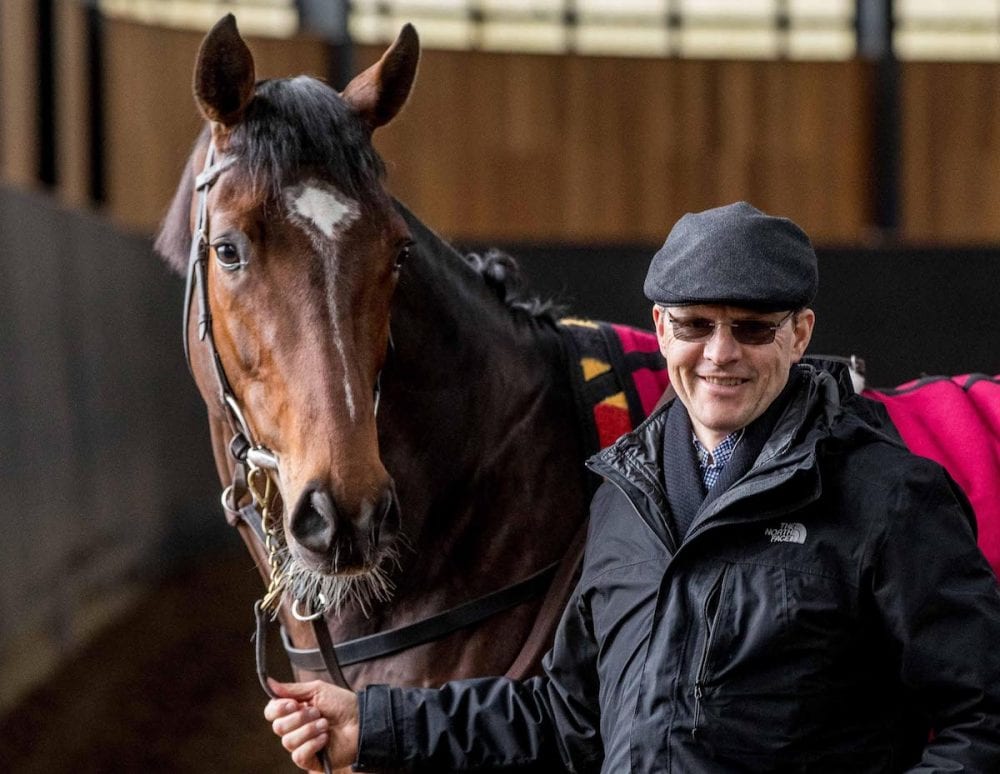 A star-studded field of nine will square off in the Grade 1, $700,000 Man o' War, a mile and three-eighths test over the inner turf as the headliner on a bumper card that will feature five stakes as part of Saturday's Man o' War Racing Festival at Belmont Park.

The well-traveled pair arrived in New York on Tuesday and enter Saturday's turf test from fourth and fifth-place finishes respectively in the Group 1 Dubai Sheema Classic at Meydan.

“The two of them traveled in well. They're in good shape. They had a ride around the barn this morning and hopefully we'll get out on the track Thursday morning,” said Comerford. “It didn't go to plan in Dubai, but they've run well when they came over here.”

A 4-year-old son of Camelot, Hunting Horn made his North American debut in July at Belmont when finishing third in the Grade 1 Belmont Derby won by Catholic Boy. A veteran of 15 career starts, Hunting Horn has also competed in Ireland, England, France, and Qatar. He made the grade with a 4 ½-length victory in the Group 3 Hampton Court over 10 furlongs at Ascot.

“He stays well. He takes to traveling well and he's the type of horse, if he's in good form, he'll always turn up on the day and run well. He looks a million dollars right now,” said Comerford.

Michael Hussey has the call from the inside post.

Magic Wand has won two of 12 starts, while banking in excess of $1.6 million. The talented bay won the Group 2 Ribblesdale at Ascot in June and followed up with runner-up efforts in the Group 1 Prix Vermeille and Group 1 Prix de l'Opera at Longchamp in France.

She completed her 3-year-old campaign with a prominent fourth in the Grade 1 Breeders' Cup Filly and Mare Turf. In January, Magic Wand rallied for second behind Bricks and Mortar when taking on the boys over a yielding Gulfstream Park turf in the inaugural Grade 1 Pegasus World Cup Turf Invitational.

“She ran very well at Gulfstream. She's here in good order and Aidan thinks a lot of her,” said Comerford.

The Canadian-bred Channel Maker enjoyed a lucrative 2018, posting a record of 2-1-1 for Hall of Fame trainer Bill Mott while winning the Grade 2 Bowling Green at Saratoga and the Grade 1 Turf Classic Invitational at Belmont.

The 5-year-old English Channel gelding will be looking for his first win of 2019 after finishing fifth in the Pegasus World Cup Turf Invitational and fourth in the Grade 2 Mac Diarmada at Gulfstream Park.

Arklow, a 5-year-old son of Arch, has banked just shy of $1.1 million with a career record of 5-3-1 from 18 starts. The talented bay stretched out successfully last season winning the Grade 3 Kentucky Turf Cup at 1 ½-miles on the Kentucky Downs turf.

Trained by Brad Cox, Arklow was set to make his seasonal debut in a Keeneland allowance on April 5 but unseated rider Florent Geroux at the gate.

Focus Group, a five-year-old son of Kitten's Joy trained by Chad Brown, rarely misses hitting the board, with five wins and three thirds from 12 starts. In August at Saratoga, the dark bay closed from last to win the 1 5/8-mile John's Call by a nose. Focus Group followed up that effort with another furious stretch run, rallying from last of 11 to finish third in the Grade 1 Canadian International at Woodbine.
He arrives at the Man o' War from a nose score on March 30 in the Grade 2 Pan American at Gulfstream.

Focus Group breezed four furlongs in 50.65 seconds on Tuesday over the Belmont main track and Brown said his horse is in good order.

Epical ships in from California for trainer James Cassidy. The 4-year-old Uncle Mo gelding has won four of 11 starts competing mainly on the pace over a distance of ground on the turf.

Last out at Santa Anita, Epical went gate-to-wire to win the 1 ½-mile Grade 2 San Luis Rey, scoring by 2 ¼-lengths over Beach View and Marckie's Water. The latter came back to win an allowance route at Santa Anita.

Completing the field are Zulu Alpha, who won the Grade 3 W. L. McKnight and Grade 2 Mac Diarmida in a successful winter campaign at Gulfstream for trainer Michael Maker; Village King, a four-time winner for trainer Todd Pletcher; and Kulin Rock, in search of his first career stakes score for Maker.