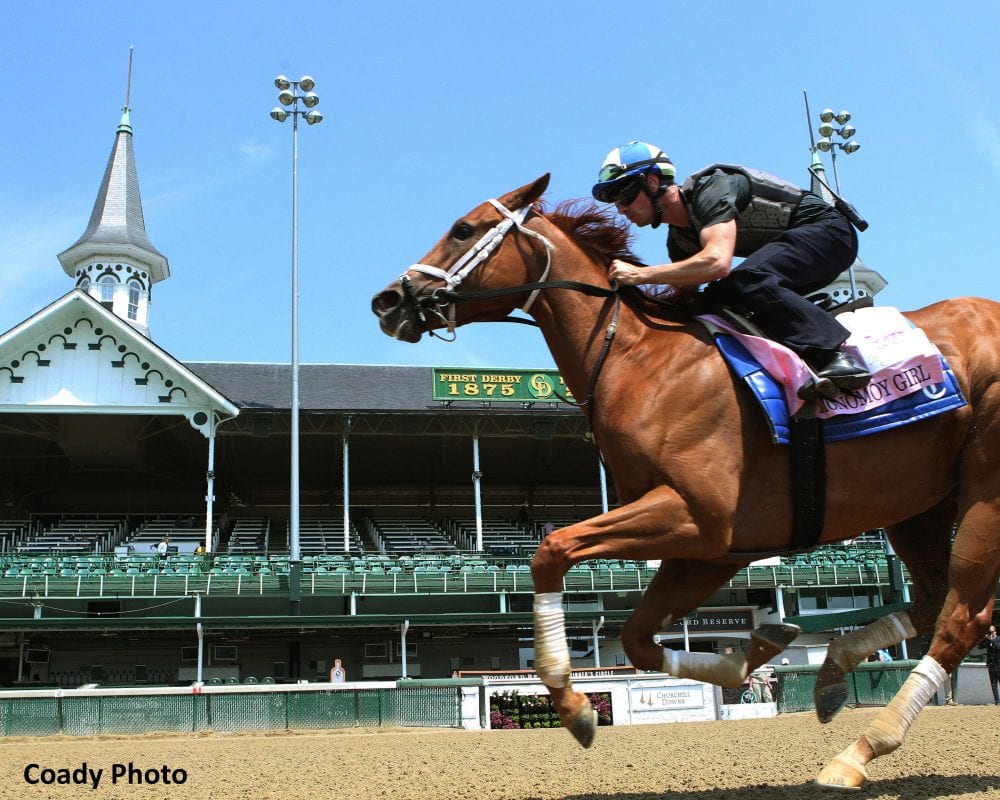 Grade 1 Kentucky Oaks winner Monomoy Girl will try to maintain her perfect 3-year-old season in the one mile, Grade 1, $700,000 Acorn presented by Nassau County IDA, as part of a field of seven in Race 4 on Belmont Stakes Day at Belmont Park.

The multiple Grade 1 winner will make her Belmont debut after winning her third start this year in the May 4 Oaks, which followed her gate-to-wire, 5 ½-length victory in the Grade 1 Ashland at Keeneland. Cutting back to the Acorn's one-turn mile will be the first time the filly by Tapizar has run at that distance since her third start as a 2-year-old in the Rags to Riches at Churchill Downs, where she drew away to win by 6 ½ lengths. Trainer Brad Cox likes what he sees from his impressive filly leading up to Saturday's race.

“She's doing great. She looks like she ready to go,” said Cox. “Last time she ran the one-turn mile I thought it was probably the most impressive race she's ever run. She's got speed and will probably be somewhat forwardly placed. I don't know about being on the lead, but she's undefeated around one turn in the only time she ever did it. I'm confident she'll like it.”

Monomoy Girl is just a neck short of perfection through seven career starts after suffering her only defeat in the Grade 2 Golden Rod at Churchill Downs. The chestnut filly appeared to have her fourth straight victory well in hand, but after zigzagging in the last sixteenth of a mile, she was caught by Road to Victory in the last start of her 2-year-old campaign.

“She's not bad, she's kind of manageable,” Cox said of the filly owned by Michael Dubb, Monomoy Stables, The Elkstone Group, and Bethlehem Stables. “You just have to kind of watch her. She's kind of a curious filly I'd guess you'd say.”

The loss became a distant memory after she returned in February and captured the Grade 2 Rachel Alexandra at Fair Grounds. It was no easy trip for Monomoy Girl who hit the gate at the break and found herself last among the field of seven, a position she was in for the first time in her life. The filly rallied wide and closed strong under jockey Florent Geroux and scored by 2 ¼ lengths.

She then followed up the performance with a victory in the Ashland en route to her half-length win over Wonder Gadot in the Oaks, where her connections had to survive a stewards' inquiry and a jockey's objection by Hall of Fame rider John Velazquez after she appeared to brush with her rival in the stretch. Her curiosity is luckily transcended by her versatility, a great trait to have according to Cox.

“So far, she's run three races this year, and three different styles. Dead last, on the lead two back, and then kind of sitting off of them last time, so she can adapt. She's proved that she's a nice filly, and she's coming into this race in great order so we'll see what happens,” he said.

Geroux has return call aboard Monomoy Girl and will break from post 3.

Zoom and Fish Stable, Charlie Spiring and Newtown Anner Stud Farm's Caledonia Road, the 2017 champion 2-year-old filly, will make her fifth career start in the Acorn, and second this year after she closed willingly to win by 3 ½ lengths against allowance company at Belmont Park on April 29.

The filly by Quality Road broke her maiden at first asking over the slop at Saratoga then followed up with a second-place finish in the Grade 1 Frizette at Belmont Park. The Florida-bred closed out 2017 with a start in the Grade 1 Breeders' Cup Juvenile Fillies November 4 at Del Mar, where she cleared the field through the stretch and won by 3 ¼ lengths. Trainer Ralph Nicks has her primed for her return to Grade 1 competition.

“I expect a good effort from her,” Nicks said. “She's training well, looks good, appetite's good. We'll see how we stack up against the Oaks champion and a couple other ones in there. It's not going to be an easy race.

“Obviously, it'll be her second race off the layoff and in her first race back, she wasn't what I would call 100 percent for her best effort that day,” he added. “It was a building block to the Acorn and, of course, to the rest of the year. I would expect her to move forward off of the last race and if we're good enough, we can catch them around a one-turn mile.”

Caledonia Road will start from post 5, and reunites with Hall of Fame rider Mike Smith, aboard for the second time since her Breeders' Cup start.

“She's graded-stakes placed around two turns,” said D'Amato. “She got a little tired late the last sixteenth [in the Oaks], and again I think the mile and the one-turn race in the Acorn might play to her advantage.”

After drawing off by 5 ¼ lengths in a field of nine in her debut at Santa Anita, Spectator advanced to the Grade 2 Sorrento at Del Mar where she repeated that same margin of victory.

Spectator will break from post 2, and will be ridden by Hall of Fame rider Javier Castellano.

Derrick Smith, Bridlewood Farm, Mrs. John Magnier and Michael Tabor's Moonshine Memories will make her first Grade 1 start since her seventh-place finish in the Grade 1 Breeders' Cup Juvenile. The Malibu Moon filly finished second in the Angels Flight Stakes at Santa Anita, her only start this year. The Simon Callaghan trainee had three victories to start her 2-year-old campaign, winning her first start in front-running fashion at Del Mar, which led to a half-length victory in the Grade 1 Del Mar Debutante. She then forged a 2 ¾-length victory in the Grade 1 Chandelier Stakes at Santa Anita before the Breeders' Cup.

Moonshine Memories drew the rail and Flavien Prat will be in the irons.