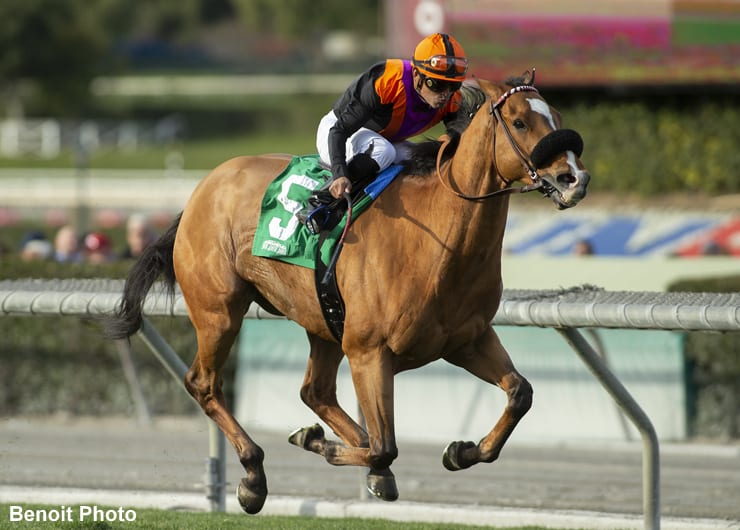 It what was virtual walk in the park, Matt Nelson's homebred Wound Tight was in complete control throughout as he waltzed to a front-running 3 ½ length victory in Saturday's $200,000 Unusual Heat Turf Classic presented by City National Bank. Ridden by Abel Cedillo and trained by Bob Hess, Jr., the 5-year-old gelding by top sprinter Coil got a mile and one eighth over the Santa Anita turf in 1:48.24.

Ward 'n Jerry, who was shuffled back while in tight quarters early at the rail, saved ground while next to last heading into the Club House turn. Full of run while a joint fourth five sixteenths from home, he proved second best on the day, finishing a half length in front of longshot Cono.

ABEL CEDILLO, WOUND TIGHT, WINNER: “This horse is very strong on the lead. There was no pace, so he was tough on the lead. He never got tired. We came back in front of the grandstand and he still wanted to run.”

GERARDO MORALES, ASSISTANT TO BOB HESS JR., WOUND TIGHT, WINNER: “The race set up perfect. The horse likes to run on the front end. I was a little concerned about going a mile and an eighth, that it was too far for him, but he definitely got the job done. I'm really happy with him. When I saw the fractions I said, 'We have a big chance,' and when they turned for home I knew it was all over.”

MATT NELSON OWNER/BREEDER, WOUND TIGHT, WINNER: “I thought it was going to be a little bit closer than that. It's a long process and a win makes it all worthwhile.

“Bob (Hess, Jr.) must have given Abel some great advice because he rode him excellent.

“It is beautiful here at Santa Anita, I grew up a few streets north from the track and this has been a fantastic place to watch races.

“Bob controls all the shots so well let him make the call on where we go next.”

NOTES: Hess was in Florida. Morales, 58, has been with Hess 35 years. Matt Nelson is the winning owner/breeder.