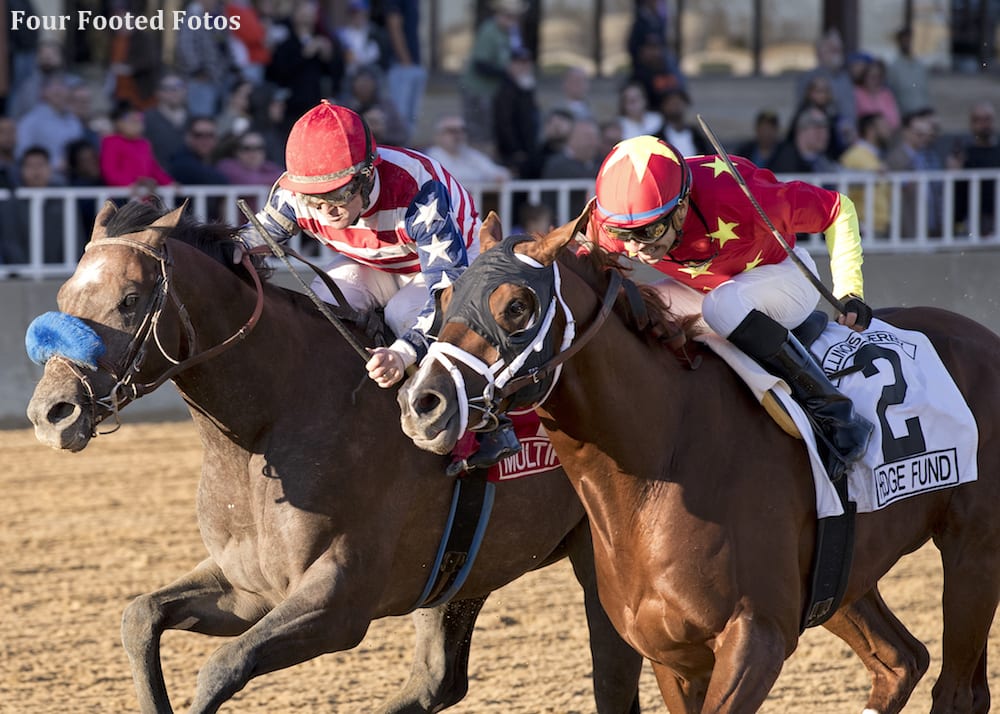 Multiplier, (outside) with James Graham aboard, just catches Hedge Fund at the wire of the Illinois Derby at Hawthorne.

Joe Senkovich's Multiplier just got up in the final strides of the stretch to win Saturday's G3 Illinois Derby, winning the first running of the race since 2015. The 3-year-old son of The Factor was kept well off the early pace by jockey James Graham, then found his best stride in mid-stretch to get his head in front of Hedge Fund at the wire. Trained by Brendan Walsh, Multiplier covered 1 1/8 miles over Hawthorne Race Course's fast main track in 1:47.98.

“He might have settled a bit too well,” Graham laughed after the race. “He's kind of lazy. But he has a great career ahead of him. Have you seen him? He's gorgeous. All kidding aside, he's a beautiful horse and Brendan has done a great job with him. I'm just happy to be a part of this.”

Longshot Stand and Cheer broke very well from the center of the seven-horse field, taking the lead by about a length headed into the first turn. The Todd Pletcher-trained Hedge Fund tracked him intently from the second position, moving to the two-path to maintain clear running under Jose Valdivia. St. Louie Guy was three-wide in third, followed by It's Your Nickel, and the remainder of the field was tightly bunched heading into that clubhouse turn. Multiplier was in very tight against the rail, but appeared very settled under Graham in approximately fifth position.

Entering the backstretch, the field began to spread out again as Stand and Cheer led through moderate fractions of :23.47 and :47.24. Approaching the far turn, however, Hedge Fund and St. Louie Guy both began to close in on the leader, and at the half-mile pole Graham started laying his body down against Multiplier's neck to start the colt running. Multiplier moved up the inside rail all the way around the far turn, a length behind Stand and Cheer at the head of the lane.

Hedge Fund had drawn alongside Stand and Cheer in the turn, but the longshot did not drop back. Instead, Stand and Cheer continued to fight for the lead, and Hedge Fund was all-out to put away that rival. Meanwhile, Graham had tried to send Multiplier between the two frontrunners at the top of the stretch, but found his path blocked as Valdivia pulled Hedge Fund toward Stand and Cheer, allowing his mount to intimidate the longshot.

Graham had to re-route Multiplier to go around Hedge Fund, and it took the large colt several strides to regain his momentum. At the sixteenth pole, Multiplier still had 1 1/2 lengths to make up on Hedge Fund. With giant strides, Multiplier closed the gap on the leader, just getting his head in front as the wire flashed overhead. Hedge Fund ran a winning race but had to settle for second, and It's Your Nickel got up over Stand and Cheer for third. (amusingly, the winning order of finish was 1-2-3-4)

“Turning for home I was pretty sure we were going to get there,” Graham said. “For a moment when Jose's horse (Hedge Fund) spurted away, he kind of caught my horse flat but Multiplier went right after him all the way to the wire and got up by maybe a neck.”

Bred in Kentucky by Mark Stansell, Multiplier was a $62,000 weanling at the Keeneland November sale. He did not meet his reserve when the bidding stopped at $220,000 during Keeneland September the next year, nor did he at the OBS April sale the next spring when the bidding stopped at $120,000. Prior to his Illinois Derby victory, Multiplier had run three times at the Fair Grounds, progressing in each start until he broke his maiden last out. Overall, his record now stands at two wins from four starts for earnings of over $180,000.