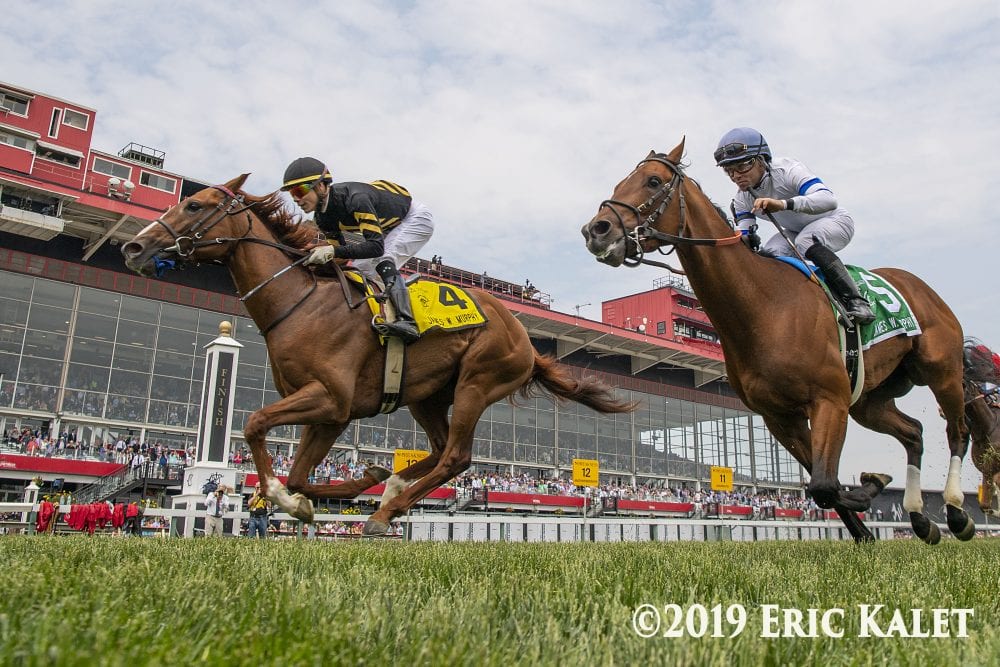 The 17th running of the $250,000 New Kent County Virginia Derby (Gr. 3) on the Secretariat Turf Course at Colonial Downs, scheduled for this Saturday August 31, could feature a pair of Graham Motion trained three-year-olds in the field and another pair in under card stakes.

“I'm inclined to enter both English Bee and Shootin The Breeze,” said Motion on Sunday morning. “They have both been competing in New York, have been consistent and both worked on Friday. Even when they've been beat, they've been close.”

The pair raced against each other in the James Murphy Stakes on the Preakness under card May 18 at Pimlico. English Bee won the black-type stakes while stablemate Shootin The Breeze was third. That marked the second of four consecutive stakes outings for the former. Most recently, English Bee was fourth in the Grade 2 National Museum of Racing Hall of Fame Stakes August 2 at Saratoga and 10 in the Belmont Derby Invitational Stakes July 6. For the year, he has two wins from five starts and a bankroll of $100,650. Overall, the English Channel Kentucky-bred has $132,150 in earnings from eight starts. English Bee is out of the Kitten's Joy mare, Evil Kitten, and is owned by Calumet Farms.

Shootin The Breeze also has eight lifetime starts with earnings of $67,692. Since breaking his maiden at Tampa Bay Downs in January, the Hard Spun colt has collected a pair of seconds and thirds in allowance company at Belmont, Keeneland and Gulfstream until a sixth most recently in an allowance optional claimer at Saratoga. Also a Kentucky-bred, he is out of Prof. McGonagall by Storm Cat and is owned by Alex Campbell.

Motion also plans to bring a pair of horses to compete in two of the Derby Day under card stakes. Mercilla is targeted for the $150,000 Fasig-Tipton Virginia Oaks but he is undecided if two-year-old Torres Del Paine will enter the $100,000 Exacta System Rosie's Stakes or the $100,000 Thoroughbred Aftercare Alliance Kitten's Joy Stakes.

Mercilla, who has raced three times, captured her first pair on turf at Lyon Parilly in France last November and at Pimlico on May 23. She most recently finished a distant fifth in Delaware Park's Christiana Stakes June 19 but the race was taken off the grass and held on dirt. “I wanted to kick myself afterwards for running the horse on dirt,” said Motion. “Since that race, I decided to wait for the Virginia Oaks at this distance.” Mercilla is by Arch out of Junkinthetrunk by Top Account.

Torres Del Paine broke his maiden in a career bow June 28 over Laurel's turf course then was fifth in the July 17 Rick Violette Stakes at Saratoga. That race was taken off the grass and contested over a sloppy dirt surface. “He's a New York bred who has worked okay on dirt before but didn't handle the bad track too well that day at Saratoga,” said Motion. “The weather was crazy with high winds and lots of rain.” Torres Del Paine's two starts have been at six and 5 1/2 furlongs respectively. The Rosie's Stakes is scheduled at 5 1/2 furlongs and the Kitten's Joy is at 1 1/16th miles Both are for two-year-olds.

Post position draw for the August 31 card will be on Tuesday. Information about stakes fields for Derby Day will be available at colonialdowns.com.