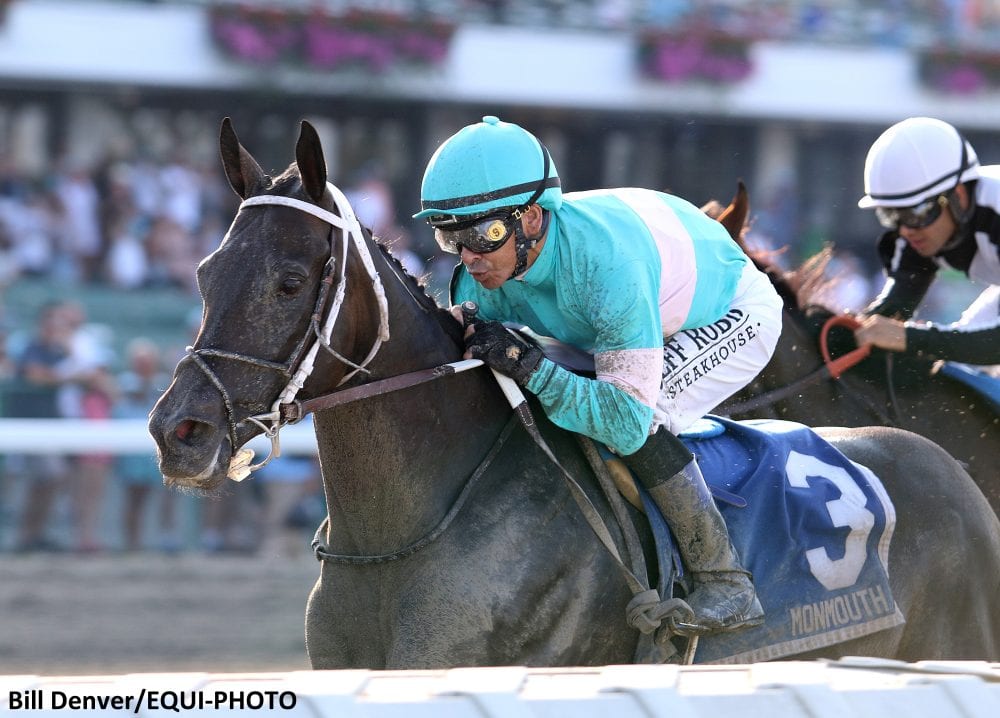 Running her record to five-for-five in 2019, Bloom Racing Stable, Madaket Stable and Allen Racing's Midnight Bisou posted an easy win in Saturday's G3 Molly Pitcher Stakes at Monmouth Park. The 4-year-old Midnight Lute filly won by just a length, but Hall of Fame jockey Mike Smith never appeared to ask her for her best to complete 1 1/16 miles over the fast track in 1:44.20. Trained by Steve Asmussen, Midnight Bisou was sent off as the prohibitive 1-9 favorite.

“Her race today was beautiful,” Asmussen said. “The hard part was us showing patience. We were very anxious. She's a very special filly and you want everything to go well. But she was great in the post parade, beautiful in the gate, and she traveled very well under Mike the whole way and finished very well. Pure professionals overcome obstacles. She's better equipped to handle them than the people.”

Coach Rocks sped out of the gate to take the lead from her inside post, kept company by Cosmic Burst through steady fractions of :24.70 and :49.06. Midnight Bisou was third at the rail behind that pair, flanked by Breaking Bread on her outside.

Midnight Bisou appeared headstrong down the backstretch, but Smith kept his hold on her and waited to make his move until the rail opened up in the far turn. Coach Rocks drifted out a bit and left a hole, allowing Midnight Bisou to come rolling up the inside to hit the wire a length in front. Coach Rocks ran on well to finish second, with Cosmic Burst finishing third. Breaking Bread was fourth.

“She was a little aggressive early on and that's probably because of the slow pace,” said Smith. “I thought about pulling out from in behind early but I didn't want her to take off early. There was still plenty of race to go so I decided to wait. When I saw my opening (along the rail) she really responded.”

Bred in Kentucky by Woodford Thoroughbreds, Midnight Bisou was an $80,000 OBS April purchase as a 2-year-old. She contended for top honors in her division as a sophomore, but has come into her own in 2019 to win all five of her starts, including the G1 Ogden Phipps and the G1 Apple Blossom. Overall, the filly's record stands at 10 wins from 16 starts for earnings of over $2.8 million.