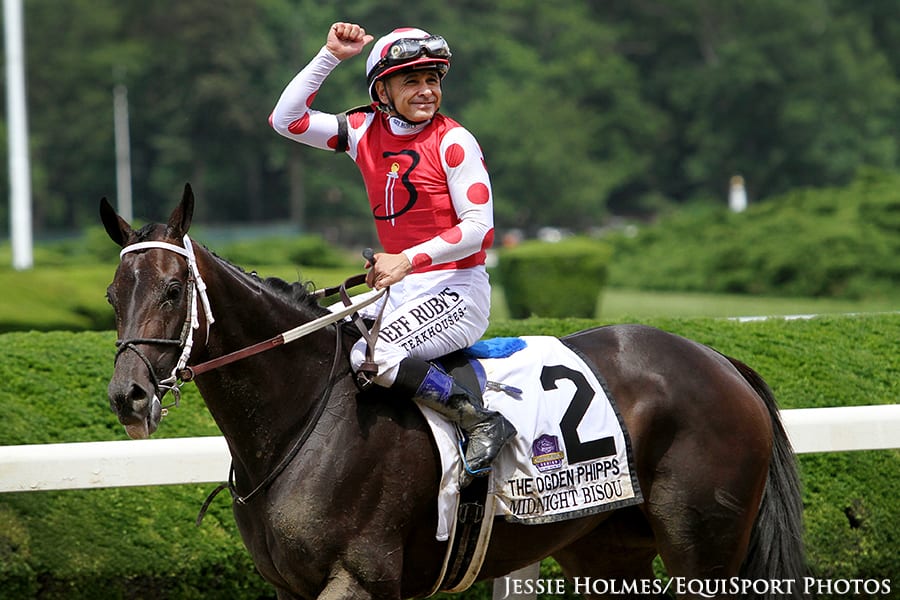 She was sent to post as the 8-5 second choice, but Bloom Racing Stable, Madaket Stable, and Allen Racing's Midnight Bisou staked her claim on top her division this season with an easy win in Saturday's Grade 1 Ogden Phipps at Belmont Park. The 4-year-old Midnight Lute filly and jockey Mike Smith sat off early pacesetter and 4-5 favorite Come Dancing in the early stages, then blew by that rival in the stretch to win by 3 1/2 lengths. Trained by Steve Asmussen, Midnight Bisou set a new stakes record for 1 1/16 miles over the fast main track, stopping the clock in 1:39.69.

“She makes you so proud,” said Asmussen. “She changes people's lives. She's just a special horse and I'm proud to be associated with her. I believe she's added to how great she is with consistency. She's expecting to win, and I think the results speak for themselves.”

With the highest Beyer figure recorded this year and as the lone speed, Come Dancing looked hard to beat on paper. Nonetheless, Smith rode Midnight Bisou with complete confidence as he allowed her to sit in fourth position down the backstretch, about two lengths off Come Dancing's early fractions of :23.39 and :45.96.

Escape Clause kept mild pressure on the leader, never more than a length behind, while Mopotism stayed three-wide in third. Rounding into the turn, Midnight Bisou began to inch up the inside rail seeking running room behind frontrunner Come Dancing.

A bit of daylight to Come Dancing's outside saw Midnight Bisou dart toward the gap just as the field straightened into the stretch, but the race was already over. Midnight Bisou never looked in doubt through the length of the stretch, cruising under the wire a 3 1/2-length winner. Come Dancing held on to finish second, while Mopotism out-finished Escape Clause for third. Pacific Wind was fifth throughout.

“She's broke good, in the bridle,” Smith said. “And she stayed parked inside waiting for a chance to let it run. I thought the filly in front would be good enough to put some space between us, so I can get out when I wanted to, and that's what happened. She's a really nice filly.”

Bred in Kentucky by Woodford Thoroughbreds, Midnight Bisou was an $80,000 juvenile purchase at the OBS April sale. She began her career with trainer Bill Spawr on the West Coast, winning the Santa Ynez, Santa Ysabel and Santa Anita Oaks before a disappointing third-place finish to Monomoy Girl in the Kentucky Oaks. Those two would continue to battle throughout their 3-year-old season, with Midnight Bisou transferred to Steve Asmussen's barn. The dark bay filly was placed ahead of her rival in the G1 Cotillion but later finished third behind her again in the Breeders' Cup Distaff. This year, Midnight Bisou is undefeated in four starts, and her overall record stands at 9-3-3 from 15 starts. She has earned over $2.8 million.