Mean Mary Has Mellowed With Age, Looking For Nice Finish In Grade 3 Orchid 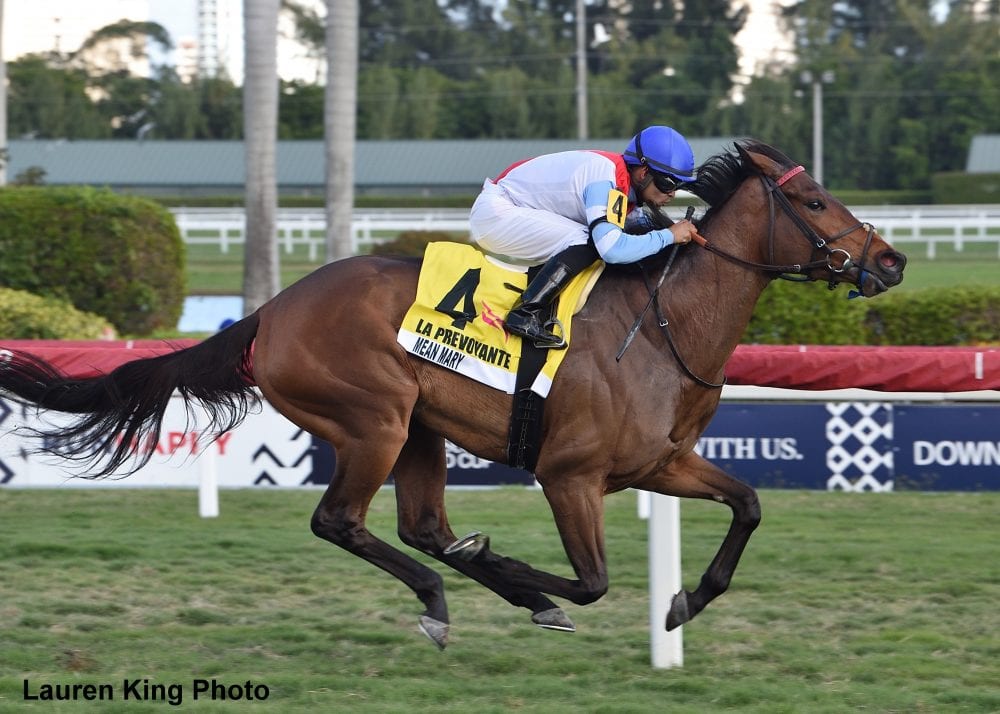 Mean Mary runs away with the La Prevoyante

Due to health and safety protocols, Gulfstream Park continues to race without spectators. Fans can live stream the action at www.gulfstreampark.com and also watch and wager at www.xpressbet.com and www.1stbet.com

Mean Mary has won each of her two starts during the Championship Meet for trainer Graham Motion. She capped her sophomore season with a determined head triumph over Cap de Creus going 1 1/8 miles Dec. 22, then rolled to a front-running five-length victory under jockey Luis Saez in the 1 ½-mile La Prevoyante (G3) Jan. 25.

“I couldn't have predicted that. She just kind of galloped around there,” Motion said. “There was no pace in the race and I thought it was very clear that Luis was going to end up on the lead, so the next question was, 'Would she be able to handle the distance,' which she obviously did. I was pretty encouraged by it.”

Mean Mary ran fifth in her unveiling on the dirt at Laurel Park last fall, but has been first or second with three wins in four tries since making the switch to the turf starting with a 3 ¼-length maiden special weight score in October at Keeneland. Her lone grass defeat came in her only start as the favorite in November at Aqueduct.

“She's pretty straightforward, actually, which is odd because in the morning she's tended to be quite tricky. But she has mellowed some and I think she's a galloper. She'll gallop them into the ground if they let her,” Motion said. “I'd like to think she can be competitive with the better grass mares this summer.”

Saez returns to ride Mean Mary from Post 6 in a field of 12 at co-topweight of 124 pounds.

A familiar foe will be Gainesway Stable's Cap de Creus, making her second straight start against graded competition. Favored last time out in the $150,000 The Very One (G3) Feb. 29 at Gulfstream, she was beaten fourth lengths when eighth following a troubled trip.

“She had been facing some nice horses leading into it even though she hadn't run in a stakes before, so I think she certainly fits with her best race. We just need to, like everyone, get a good trip,” trainer Todd Pletcher said. “I think a mile and three-eighths suits her well.”

Joel Rosario gets the call for the first time from Post 7 at 118 pounds.

“She was favored in her last start and she kind of got shuffled back a little bit going into the first turn and that was a tough course to make up a lot of ground,” Pletcher said. “I thought she ran on consistently but I think the setup of a mile and three-eighths race will be more to her liking.”

John McCormack's Elizabeth Way was a 14-1 upset winner of the 1 3/16-mile The Very One in gate-to-wire fashion, her second win in as many starts over the Gulfstream turf this year since coming to North America from Ireland for U.S. and Canadian Hall of Fame trainer Roger Attfield.

Morsches Stable's Gentle Ruler also enters the Orchid on a two-race win streak, though she has yet to make her seasonal debut. The 5-year-old mare won the Ramsey Farm and Dowager (G3) in her last two starts of 2019, also taking the Robert G. Dick Memorial (G3) last summer at Delaware Park.