Maximum Security Ruled Out Of Pennsylvania Derby After Nephrosplenic Entrapment 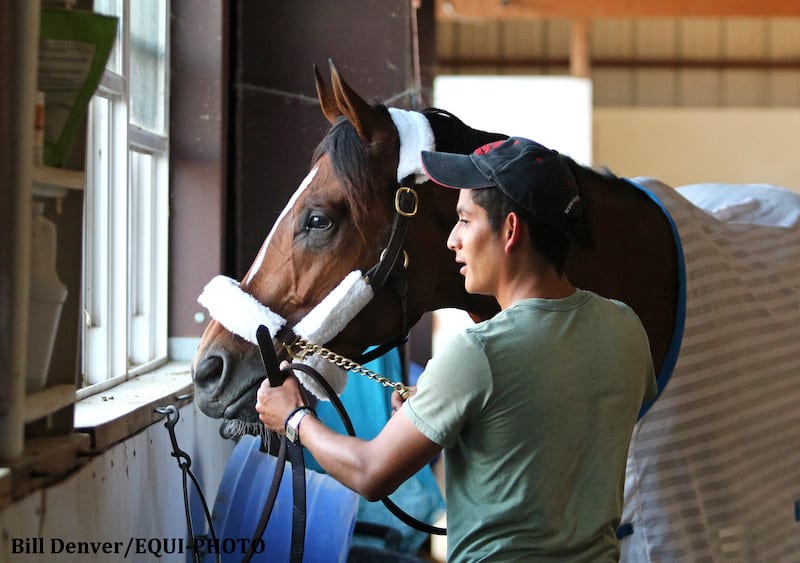 Haskell Invitational and Florida Derby winner Maximum Security is out of Saturday's Grade 1 Pennsylvania Derby at Parx due to a large colon nephrosplenic entrapment that developed shortly after the colt returned from a morning work on Monday, trainer Jason Servis announced on Tuesday.

Servis said that an issue developed with his star 3-year-old late Monday afternoon, and that Maximum Security was rushed to the Mid-Atlantic Equine Clinic in Ringoes, N.J., where the diagnosis was made by Dr. Janik Gasiorowski.

The medical issue is not considered career threatening. The condition occurs when a portion of the horse's colon turns and becomes stuck over the ligament that connects the horse's left kidney and spleen along the left side of the body cavity. It's usually not known why the intestine shifts position.

“I've spoken to the Wests (owners Gary and Mary) and they understand that it's all about the horse. That's first and foremost,” said Servis. “There's nothing that anyone could have done to prevent it. It's one of those things that just happens. It's unfortunate and the timing is terrible but that's horse racing.”

Maximum Security had gone a one-mile lick at Parx early Monday morning without incident, with Servis saying he was summoned to his barn around 3:30 p.m. because something was amiss with the horse.

“He was doing great,” Servis said. “But I soon as I saw him I could tell he was in trouble so we got him right on the van and sent him to the Mid-Atlantic Equine Clinic.”

Servis said he did not have a time frame for a possible racing return for Maximum Security, holding out hope, he said, for the Breeders' Cup “or something else that might be out there.”

Maximum Security is currently back in Servis' barn at Monmouth Park.

“Maximum Security went through a severe, acute bout of colic,' added Dr. Gasiorowski. “He got his colon displaced, which is actually very common in thoroughbred racehorses. He just got his displaced tightly enough that it was extremely painful. He was sent to our clinic immediately and we managed to get him to correct without doing surgery.

“From a physiologic standpoint the horse is going to be recovered in a short period of time. We're talking a couple of weeks and he will be fine. From a racing, training and athletic standpoint he needs a little bit of time off. He went through a big episode and he is going to need some time to recover.

“As far as his career goes, there are zero long-term ramifications from what he just went through.

“The reason horses going through this survive is because of the rapid response of the veterinary team at the track, the trainer's involvement and the fact that Gary and Mary West were willing to act immediately by doing what is in the horse's best interests. They've chosen not to race and I think that is a wise decision that puts the horse first.”