Maurice Proves Much The Best In Hong Kong Cup 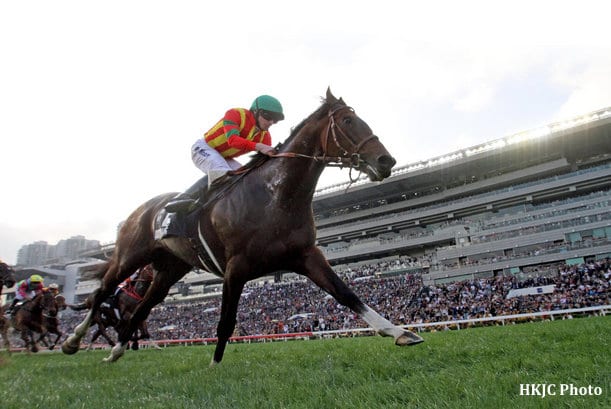 Gifting his trainer Noriyuki Hori with the first foreign double on the Longines Hong Kong International card, 5-year-old Maurice swept past his rivals to win Sunday's G1 HK Cup by three lengths at the line. Ridden by Ryan Moore, who earned his 20th G1 win of 2016, the son of Screen Hero stopped the clock in 2:00.95 for 2000 meters (about 1 1/4 miles) over the good turf at Sha Tin Racecourse.

“Fortunately there was good pace in the race and halfway down the back I thought it was setting up nicely for him and it was just a matter of finding the room,” said Moore. “As soon as he got room and I put him into gear he just let down exceptionally well. He got to the leader early and then he was just easing up really. He has improved every time I've ridden him.”

Last year's winner, A Shin Hikari took the lead out of the gates as Maurice missed a step at the break. Under the guidance of Yutaka Take, A Shin Hikari extended his lead to nearly six lengths down the backstretch, leaving Maurice with quite a bit of work to do. But Moore never panicked, waiting patiently around the far turn, and found room to the inside. He and Maurice loomed up alongside A Shin Hikari's outside, looked him in the eye and then sprinted away, leaving that rival gasping for a tenth-place finish. Secret Weapon wound up second, with Staphanos checking in third.

“The horse, the jockey and the staff all tried very hard so it is a mutual effort and it feels great,” said Hori. “This horse really does seem to love Hong Kong but we get a lot of support from the Hong Kong Jockey Club including Mark Player and everyone who has helped us here and helped us get the horse to be his best. It is a team effort, Japan and Hong Kong together.”

While Hori was coy about Maurice's immediate future, rumors about the horse retiring after the HK Cup have abounded throughout the week leading up to the race. If so, he would retire with a record of 11 wins from 18 starts.