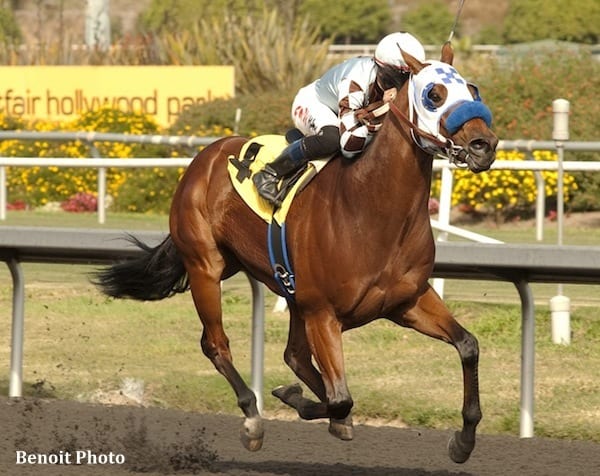 Majestic Stride engaged with Jeff Bonde stablemate Anillo in the early going, then pulled away in the stretch to win the 33rd running of the Grade 3 Vernon O. Underwood Stakes at Betfair Hollywood Park on the Thanksgiving Day holiday program Thursday. Color of Courage finished second, 2 1/2 lengths behind the winner, with Handsome Mike third in the field of six sprinters. Time for six furlongs on Cushion Track was 1:08.87.

A 4-year-old Trippi gelding bred in Florida by Harold Plumley, Majestic Stride was winning for the fourth time in seven starts. The Underwood was his third victory in four outings in 2013 and his first in a stakes. He was coming off a fourth-place finish, beaten just 1 1/2 lengths by Secret Circle, in the G1 Breeders' Cup Sprint at Santa Anita Park on Nov. 2.

Edwin Maldonado rode Majestic Stride to victory for the partnership of Edward Brown Jr., Alan Klein and Philip Lebherz, who waited patiently during an 18-month layoff following a fifth-place finish by Majestic Stride in the 2012 Southwest Stakes at Oaklawn Park, where he broke his maiden.

Klein and Lebherz were co-owners of 2012 Underwood winner Smiling Tiger, also trained by Bonde, and the same partnership won the $300,000 Zia Park Oaks with Unusual Way on Wednesday in New Mexico.

Anillo set the early fractions of :21.86 and :44.35, but Majestic Stride took control at the top of the stretch, clicking off a five-furlong time of :56.27 en route to his final clocking of 1:08.87 for six furlongs. He was the odds-on favorite in the race.

Post-race quotes:
EDWIN MALDONADO, MAJESTIC STRIDE, Winner: “That was the plan–to give Anillo (also trained by Jeff Bonde) a head start and sit second–but (Chosen Miracle) kind of pushed me the first quarter mile and I didn't want to put too much pressure on our other horse.  I knew he was going to win today because he had a little trouble in his last race, the Breeders' Cup (Sprint).  He's a nice horse.”

JOE TALAMO, COLOR OF COURAGE, Second: “I thought I was going to win at the quarter pole, but he just got tired.  He was pretty fresh out of the gate, but then he settled nice.  He's really good to ride.  He's six, going on seven, but he acts like a four-year-old.  I'm real happy with his comeback.”

MIGUEL CARRANCA (Asst. to Jeff Bonde), MAJESTIC STRIDE (Winner) and ANILLO (Fourth): “Maldonado knows what he's doing.  He knew (Anillo) has a lot of speed.  We just told him to pick a spot and go from there.”

JORGE GUTIERREZ, COLOR OF COURAGE, Second: “He's a nice old horse, just does his own thing.  He's not the kind of horse you can really work to get ready, so I was a little worried about how fit he would be.  He worked well enough, but he was away a long time.  He bowed a tendon two years ago, but it looked good when he came back today.”