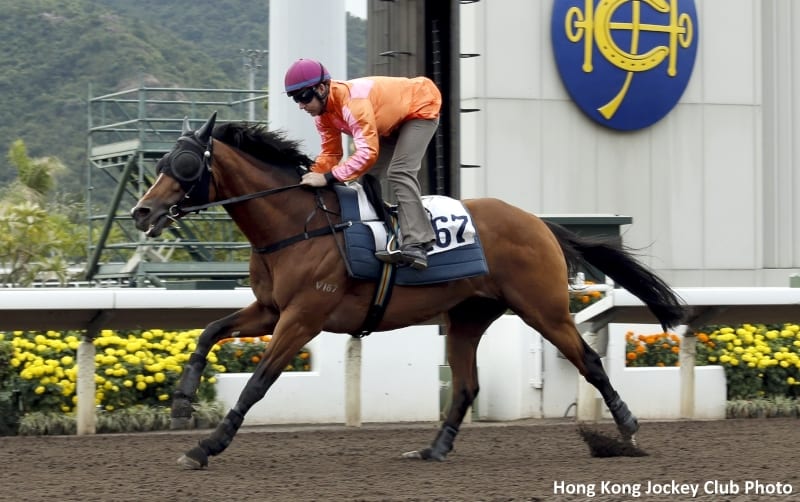 Helene Paragon in the barrier trial

A little more than a week out from the Longines Hong Kong International Races, nine local contenders stretched out in dirt track barrier trials at Sha Tin Racecourse on Friday, Dec. 1. The overall vibe was positive, despite one noticeably muted display.

Helene Paragon is among the leading lights for the G1 Longines Hong Kong Mile on December 10, having finished second to Beauty Only last year. That being so, the dual Group 1 winner's nine and a half-length last of nine in batch one over 1200m drew concerned speculation from trackside watchers.

Appearances can be deceptive, though. John Moore was not perturbed.

“I wouldn't read too much into Helene Paragon's trial,” the trainer said. “He's had an eye issue, and for that reason he wore a hood and a pacifier and I put him in a wide gate so he didn't get any sand kicked in his eye.”

Running wide throughout, the Polan entire appeared disengaged from the task at hand.

“The pacifier takes out a lot of the light,” Moore explained, “and then you've got the hood on so he was always going to be a little more subdued than usual. Tommy just said he never got out of first gear.

“He's physically well and ready to go, though. He'll gallop next Thursday with a lead horse and I'm sure you'll see more spark than today.”

Eagle Way is another Moore contender with a setback to overcome, albeit one of more severity than Helene Paragon's eye concern. The G1 Hong Kong Vase (2400m) entrant missed his intended prep in last month's G2 Jockey Club Cup (2000m) due to a lung problem.

The chestnut strode out well enough in batch two this morning, also over 1200m, to give Moore confidence that the More Than Ready gelding will make the Vase line-up in good enough order to be competitive.

“That was a good trial, I'm really pleased with that,” he said after watching the G1 winner pass the post five and three-quarter lengths sixth of 12. “He'll go back for a vet check now and we'll scope him to make sure the lungs are in order, but I'm pleased with that.

“He actually enjoyed the dirt, he got through it really well. Tommy (Berry) was a little bit surprised that he pulled up so well.”

Moore is under no illusions about the task facing Eagle Way as he heads into the mile and a half contest with only two runs under his belt this season.

“It's going to be a big hill to climb going into a Group 1, we did not want to miss that prep race, but he carries no middle and he's very clean in the wind,” he said.

“It was quite a serious setback, it wasn't just a simple cold, but I'd say on that trial today, it's all back on track for him making the Vase. The jury's out as to how he's going to run but hopefully he draws a good gate and can show his ability.”

Hong Kong's top-rated horse Mr Stunning looked the part as he limbered up for a tilt at the G1 Hong Kong Sprint (1200m) in batch four over 1050m. John Size's charge trucked home in fifth under tight restraint, two and a half lengths behind the Moore-trained Not Listenin'tome, with stablemate D B Pin untested in third.

Size's G1 Champions Mile winner Contentment seems to be peaking at the right time. The chestnut travelled strongly to finish an easy second in batch two under a Brett Prebble hold.

The champion trainer's Thewizardofoz, meanwhile, showed up well in batch one, cruising past stablemate and fellow Hong Kong Sprint candidate Amazing Kids to “win” the heat. The Size-trained Western Express moved well enough as he passed the post a close-up fifth, with the G1 Hong Kong Mile on his agenda.

Expectations are high that Nothingilikemore could be a star of the 2018 LONGINES HKIR and the Size-trained four-year-old warmed up for his probable engagement on this year's undercard with a nudged-along fourth behind Thewizardofoz in batch one.