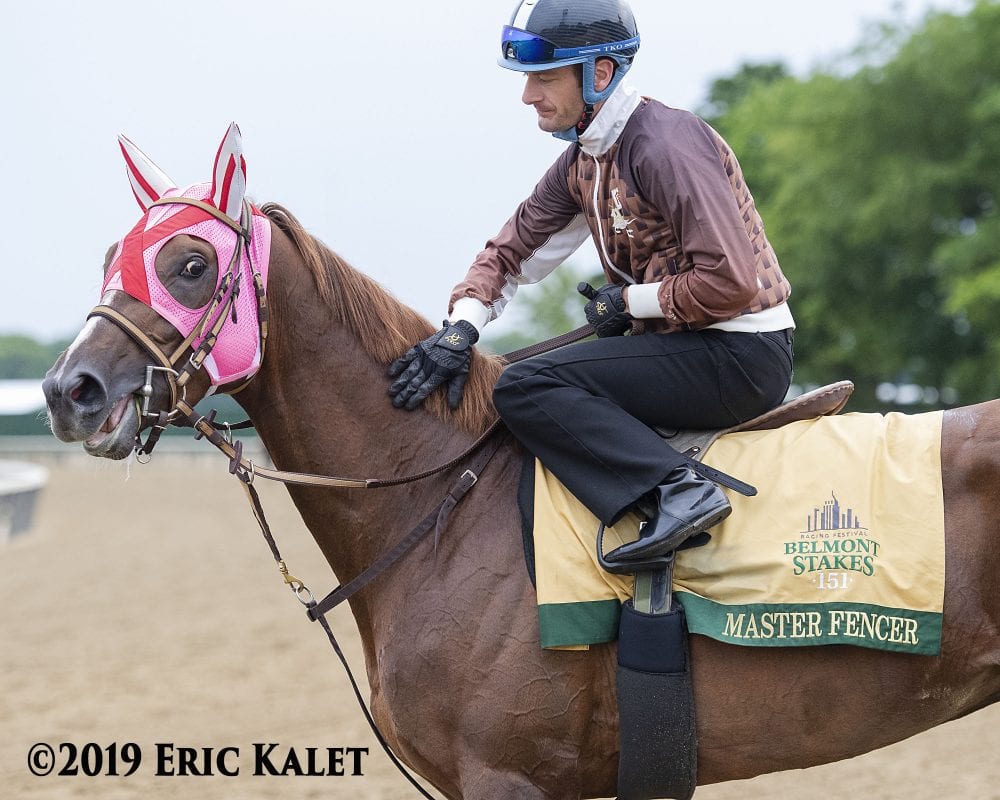 Katsumi Yoshizawa's homebred Master Fencer, trained by Koichi Tsunoda, competed in the two-thirds of the Triple Crown with a rail-rallying sixth in the Grade 1 Kentucky Derby and a wide-rallying fifth in the Grade 1, $1.5 million Belmont Stakes presented by NYRA Bets, just a head shy of Tax for fourth.

The Japanese-bred son of Just a Way remained in New York following the Belmont Stakes effort and has continued to train well for his return to turf in the Grade 1 Belmont Derby Invitational set for July 6.

“I let him loosen up his muscles and then did a lap and a half with a light gallop on the training track,” said Kono via translator Sean Toriumi.

Master Fencer, previously piloted by Julien Leparoux, will be reunited with jockey Suguru Hamanaka for the Belmont Derby.

Hamanaka was aboard for both of Master Fencer's wins in Japan. Hamanaka will jog Master Fencer on the turf on Tuesday and then breeze the colt on the dirt training track Wednesday.

Master Fencer made a pair of starts on turf in Japan finishing second and fourth, both in events at the 1 1/4-mile distance of the Belmont Derby. Last Sunday, the chestnut galloped over the Belmont turf for the first time.

“It went very well. He seemed very refreshed and energetic out there,” said Kono. “He's run twice before on turf in Japan and he felt better this time on the turf than he did back home in Japan. He's doing well and seems very happy here.”

Tadakazu Obama's Jodie, a daughter of Daiwa Major bred in Japan by Northern Farm, arrived at Belmont Park at 4 a.m. Saturday morning to prepare for the Grade 1 Belmont Oaks Invitational on July 6.

The talented bay, currently in the care of training assistant Hiroshi Kawano, will clear quarantine early Monday morning when both trainer Hirofumi Toda and jockey Miyabi Muto are slated to arrive.

“We will be able to train on Monday morning and hope to breeze five furlongs on the grass on Tuesday or Wednesday,” said Ando.

Jodie, a veteran of nine starts all in Japan, graduated on debut in Tokyo in June 2018 and followed up with a fourth in the Group 3 Niigata Nisai at Niigata at one mile [1,600 meters] on the turf. In November, Jodie captured the Akamatsu Sho over one mile of firm turf at Tokyo in November, but was off-the-board in the Group 1 Hanshin Juvenile Fillies to close out her juvenile campaign.

In February, Jodie ran third in the one-mile Group 3 Daily Hai Queen Cup at Tokyo and then stretched out to 1 1/4 miles (2,000 meters) in April to finish third in the Group 2 Sankei Sports Sho Flora Stakes at Tokyo.

Kawano said a turn back in distance for the Belmont Oaks should suit Jodie.

“I think 2,000 meters will be suitable for her,” said Kawano. “She's really improved a lot since the Oaks and has gotten better with every run.”