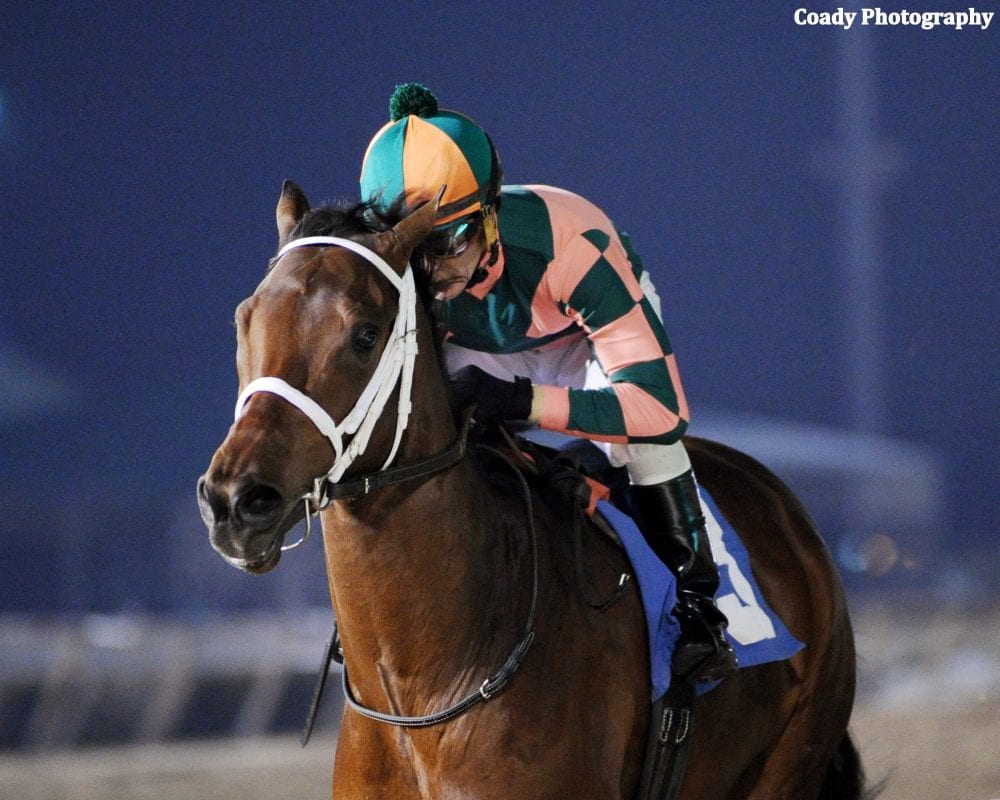 Albano proves much the best in the 2015 Maxxam Gold Cup

The Maxxam Gold Racing Festival is set for Saturday night at Sam Houston Race Park and will feature four stakes. Nationally prominent horsemen are shipping in runners for the $100,000 Maxxam Gold Cup, which drew an excellent field of 11 horses for the mile and one-eighth main track event.

Al Stall, Jr. has saddled two previous winners of the Maxxam Gold Cup: Middleweight in 2006 and Cease in 2012. His entrant this year is Columbine Stable LLC's Money Flows, a 6-year-old son of Malibu Moon. Lightly raced, he has won four of his eight career efforts and did not disappoint in his first start of 2017, a two-length victory in an $80,000 allowance optional claimer last month at Fair Grounds. Jockey Colby Hernandez was the winning pilot, and has the return call in the Maxxam.

“He's on target for Saturday,” said Stall. “We've been pleased with his works; he's had a good series of breezes, including one on Monday morning, and he looks great. I love our draw and think he's sitting on a big race.”

Trainer Steve Asmussen won the $500,000 Razorback Handicap with Gun Runner on Presidents' Day. The Hall of Fame conditioner has been on fire throughout the 2017 Sam Houston Race Park Thoroughbred meet, with his horses hitting the board at a blistering stat of 70%. He ships in Iron Fist for the partnership of Stonestreet Stables LLC and Regis Racing. The 5-year-old son of Tapit was trained by top California horseman Jerry Hollendorfer for his first ten starts before uniting with Asmussen at Saratoga in 2016. He ran second in the Grade 3, Ack at Churchill Downs. His most recent start was a fourth-place finish in the $75,000 Louisiana Stakes on January 21 at Fair Grounds. Sam Houston Race Park's leading rider, Iram Diego, will guide the Kentucky-bred, installed as odds of 3-1.

Tiger of Wales from the barn of Mike Maker will make the trip from Florida for his Sam Houston Race Park debut. Owned by J. Armando Rodriguez Racing Stable, Inc., the Florida-bred son of D'Wildcat ran three races in Puerto Rico last year before returning to Maker in Florida. He finished fourth in the $200,000 Sunshine Millions Classic Stakes at Gulfstream Park on January 21, which was also a nine-furlong race. Jockey C. J. McMahon will guide the 5-year-old from post position two.

“I had him before he went to Puerto Rico,” said Maker. “He came out of the Sunshine Millions in good shape and is doing fine. We have always had high hopes for him.”

Financial Modeling, owned by Ten Strike Racing, has two wins at this distance and will likely attract a fair share of interest at the windows on Saturday night. Trained by Brad Cox, the 5-year-old by Street Sense has earned $249,220 in 14 previous starts. Recently third in the $75,000 Tenacious Stakes at Fair Grounds, the Kentucky-bred competed in the Grade 1, Donn Handicap in 2016 at Gulfstream Park. Sophie Doyle will guide the dark bay from post position eight.

2015 Maxxam Gold Cup victor Albano returns in search of his fifth career title. The 6-year-old son of Istan was conditioned by Larry Jones when he won the Maxxam two years ago. Claimed for $40,000 on December 29 by Racepoint Stables, the multiple-graded stakes placed veteran is now trained by Don Bennett. Albano will break from post position five under rider Lindey Wade.

Fear The Cowboy drew the far outside post under jockey Jesus Rios. The son of Cowboy Cal is owned by Kathleen Amaya and Raffaele Centofanti, who campaigned 2014 Houston Ladies Classic champion, Rose To Gold. Trained by Efren Loza, Jr., Fear The Cowboy also ran in the Tenacious Stakes and prepped for the Maxxam with a convincing four-length score on February 10 at Delta Downs.

The Maxxam Gold Cup at Sam Houston Race Park had its first running in 1994, and has produced an outstanding roster of distance specialists. Past champions of the mile and one-eighth main track feature include Sir Cherokee, Reporting for Duty, Student Council, Alumni Hall, Cease, Unstoppable U and Red Rifle. Last year's Maxxam champion was Mobile Bay, who became a millionaire on February 11th at Delta Downs.

The Maxxam Gold Cup will run as the seventh race of the February 25th card, which gets underway at 6:23 pm (CT). Three turf stakes, the $50,000 Jersey Lilly Stakes for fillies and mares, the $50,000 Bucharest Turf Sprint at five furlongs and the $50,000 Texas Heritage Stakes for 3-year-olds at the distance of one mile and one-sixteenth will also be contested on Saturday evening.

“We appreciate the support of each of the connections in pointing to this race,” said Matt Crawford, Sam Houston Race Park's racing secretary. “The Maxxam Gold Cup has a rich tradition and we look forward to crowning another exceptional champion Saturday.”