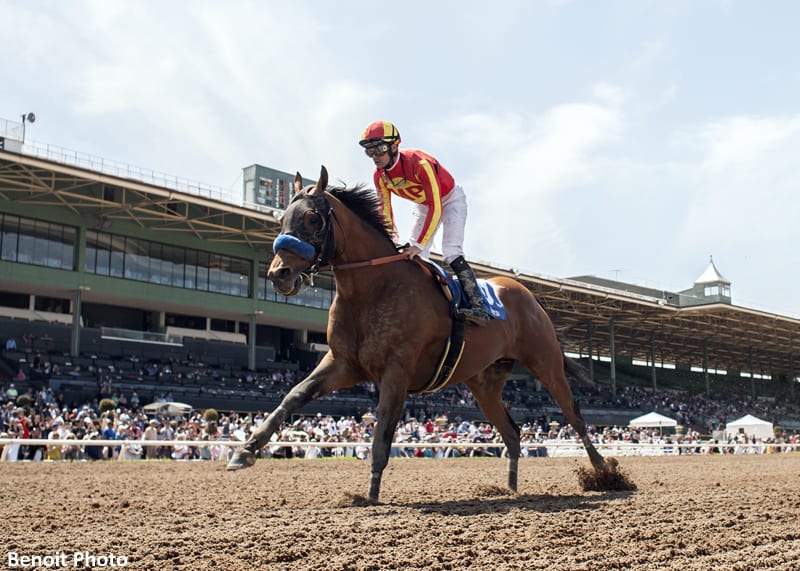 California-based multiple graded stakes winner Hoppertunity will make his first start in New York since 2016 in the Grade 2, $400,000 Brooklyn Invitational, contested at the same 1 ½-mile distance as the Belmont Stakes, on Saturday's star-studded undercard at Belmont Park.

“He likes a mile and a half. He feels more comfortable, gets in his own little groove,” said Baffert. “Those shorter races, he has trouble closing. He needs a certain kind of pace.”

The Karl Watson, Mike Pegram, and Paul Weitman color-bearer also boasts back-to-back victories in the Grade 2 San Antonio in 2016-17 and a half-length win in the 2014 Grade 1 Clark Handicap, among others through five seasons of racing. In all, Hoppertunity holds an 8-7-5 record from 31 starts for career earnings of more than $4.4 million.

Hoppertunity will be ridden by Flavien Prat, who has been aboard the horse in his last four starts. At 5-2 on the morning line, the pair will leave from post 2.

Hoppertunity will be joined in the Brooklyn by Paul Pompa, Jr.'s homebred Hard Study, a 5 ½-length winner of the 1 3/8-mile Flat Out over the local course on May 4, and hard-knocking veteran War Story, exiting a close runner-up finish in the Grade 2 Charles Town Classic on April 21.

The Todd Pletcher-trained Hard Study, 5-2 on the morning line, will break from post 3 with Manny Franco in the irons. Imaginary Stable and Glenn Ellis' War Story, the 2-1 program choice, will be ridden by Hall of Famer Javier Castellano from the outside post 9.

Rounding out the field for the Brooklyn are Carlino, fourth in the Flat Out last time out; Take Your Guns, a 2 ¼-length winner of a competitive optional-claimer on April 28; Mr. Sinatra runner-up Mills; Backsideofthemoon, winner of the Jazil in January at Aqueduct Racetrack; Kentucky invader Giant Payday; and Pletcher trainee Outplay, looking to rebound from a seventh-place finish in the Grade 2 Churchill Downs Stakes.