Henley’s Joy ‘On Target’ For Saratoga Derby, To Be Joined By New Stablemate Kadar 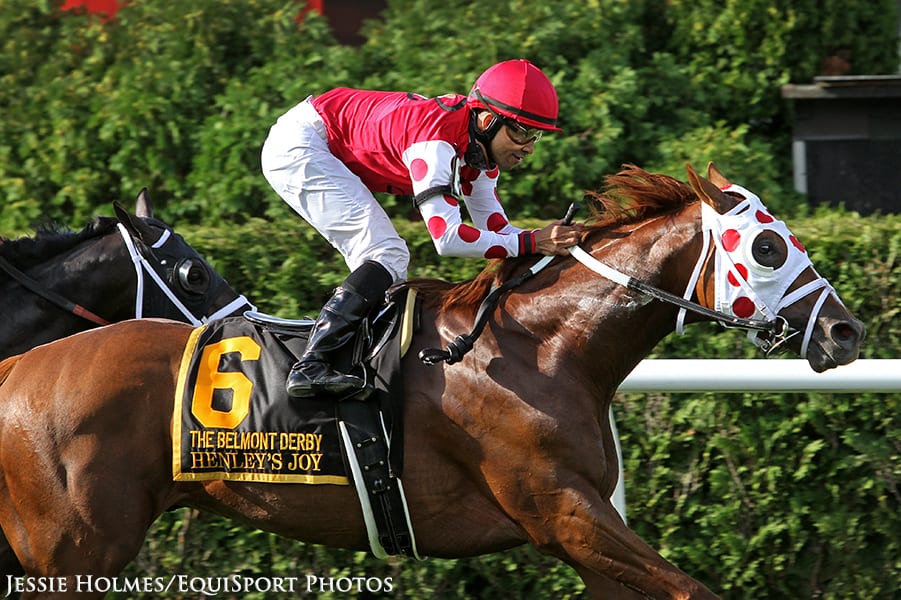 Trainer Mike Maker will be represented by a pair of strong contenders in the second leg of the Turf Trinity in the $1 million Saratoga Derby set for Sunday, August 4, when he saddles Henley's Joy and newcomer Kadar.

Bloom Racing Stable's Henley's Joy was a three-quarter length winner of the first leg of the newly minted Turf Triple series, the $1 million Belmont Derby Invitational, at odds of 20-1. With Jose Lezcano up, Henley's Joy rated in third position and found his best stride down the lane in the 10-furlong test, overtaking Social Paranoia in the final furlong and hitting the wire in 1:58.29.

After seeing his charge finish second in a trio of graded events by narrow margins, Maker was resolute in his estimation of the best part of the Grade 1-winning performance from Henley's Joy.

“The way he finished,” said Maker. “There were a few races there where he had a less than ideal trip, and hopefully he'll get another good trip in the Derby.”

On Saturday, Henley's Joy breezed for the second time following his breakthrough score, covering five furlongs on the Saratoga main track in 1:01.95.

“He worked well and is on target for the Derby,” said Maker.

Phoenix Thoroughbred III's Kadar, a dark bay son of Scat Daddy, graduated on debut in September in a one-mile turf allowance at Haydock under the tutelage of Karl Burke. In April, Kadar finished fourth in the Feilden at Newmarket before shipping to North America.

Kadar made his North American debut on July 18 at the Spa, rallying from last-of-10 to finish third, defeated just a head, in a race won by the well-regarded Chad Brown trainee and fellow Saratoga Derby invitee Value Proposition.

“He ran a really good race. He didn't get away very good and was carried extremely wide. He finished strong and just missed in a very competitive allowance race,” said Maker.

Maker said the 1 3/16-mile distance of the Saratoga Derby will suit the lightly-raced colt.

“I got him with orders to stretch him out, which I totally agreed with,” said Maker. “I look forward to running him in the Derby as well.”

The third leg of the Turf Trinity, the $1 million Jockey Club Derby at 1 1/2-miles, is slated for September 7 at Belmont Park.