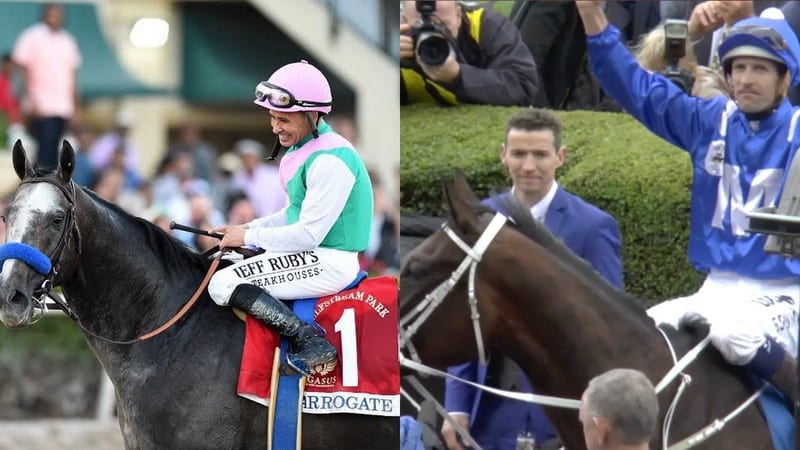 Winx (right) has won 14 straight, while Arrogate has earned more than $11 million in just seven races

The world's best racehorse is today as much a tale of two countries and their track types as the horses themselves. Top-rated Arrogate, according to the Longines World's Best Racehorse Rankings, has excelled on dirt courses, winning the G1 Pegasus World Cup at Gulfstream Park last month and the G1 Breeders Cup Classic at Santa Anita last fall. In contrast to the US, turf tracks dominate the racing scene of Australia, where the second-best ranked Winx has achieved legendary status following 14 consecutive wins over two years on turf.

It may be a fantastical question for the global racing community, but how would Winx fare against Arrogate on a dirt track stateside?

Turf may provide horses with an easier grip but also causes a horse to expend more of its energy — more quickly — than dirt, especially if the horse is moving over wet or softer turf. As a consequence, Australian turf tracks still favor horses that have been trained to be more methodical and strategic from the offset, before exerting themselves in a fast, hard final charge later in the race. In contrast, horses succeeding on the USA's dirt tracks, a less challenging terrain, tend to pick-up speed very early in the race to maintain an advantage they hold until the finish.

Winx typically settles toward the rear of the field, but she has demonstrated that she has the early speed and ability to settle up front if required. And conversely, Arrogate prefers to be up front on the pace, but he showed in the Breeders' Cup that he can settle off the speed and make a late run down the stretch too.

Crossing Over
Whether Winx would be able to cross over to race successfully on US dirt racks would depend on her and regular jockey Hugh Bowman's ability to adjust their racing style to suit the new surface. If the mare did head to the States to race at Santa Anita or Gulfstream Park, she wouldn't be the first Australasian horse to cross over and compete on the dirt.

Most recently, champion New Zealand-bred thoroughbred So You Think, who shares Winx's current Cox Plate record of winning the G1 race twice consecutively (in 2009 and 2010), competed on dirt in the 2011 G1 Breeders' Cup at Churchill Downs. So You Think had tremendous early speed and was able to position himself behind the leader, but extraordinary early speed and a troubled run down the stretch caused him to finish 6th behind the fast-finishing Drosselmeyer.

There is a more promising precedent for Winx's potential success on dirt stateside, but we need to take a look back to the 1930s – and the legendary Phar Lap. The horse nicknamed 'Big Red' achieved a string of G1 victories on the Australian turf, including the 1930 Melbourne Cup at Flemington and both the 1930 and 1931 Cox Plates.

Phar Lap's owners brought him by ship to North America towards the end of his career. 'Big Red' triumphed on the dirt of the Agua Caliente Racetrack in the Mexican border-town of Tijuana, winning the Agua Caliente Handicap, North America's richest race at the time, and also setting a new track record of 2:02 4/5 over 1 1/4 miles. Phar Lap's win was also unexpected, with America's Reveille Boy, who placed second, and Spanish Play, who finished 8th, the race favorites.

Should we be allowed to dream of Winx becoming the 21st century Phar Lap and crossing the seas to compete on dirt against Arrogate in his own backyard?  While perhaps unlikely to occur, a Winx versus Arrogate matchup would be a heavyweight battle engaging the entire international racing community.