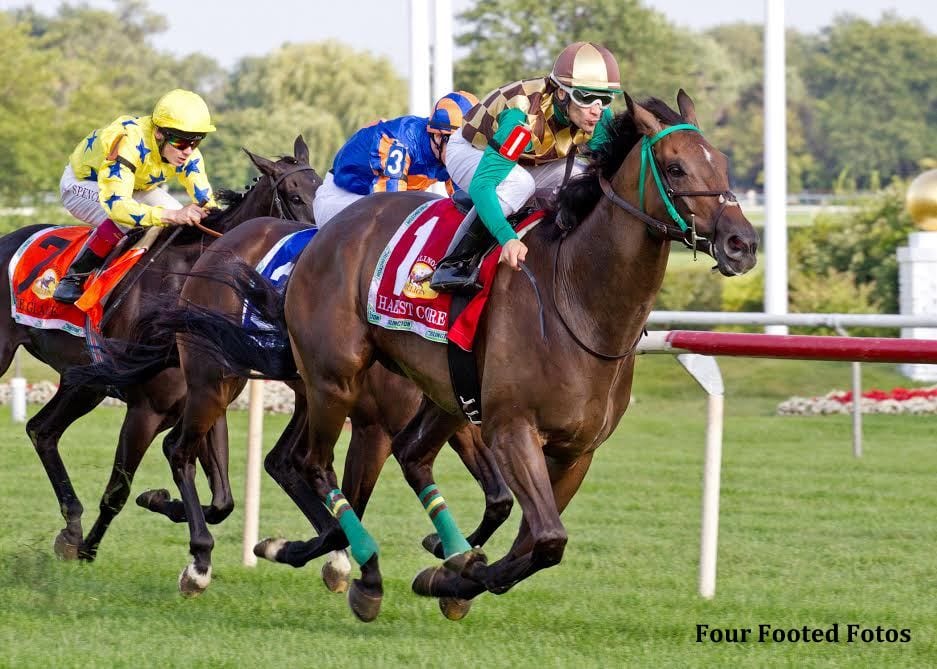 Andrew Bentley Stable's Hardest Core has exited the effort of his life in fine form, according to trainer Eddie Graham. The son of Hard Spun left early Sunday morning to head back to his Mid-Atlantic base after beating five Group I or Grade I winners in the to win the majority of the Arlington Million XXXII purse.

“He cooled out great,” Graham reported. “He ate up and he's happy. That's a great thing.

“Arlington seems like a big galloping course,” Graham reflected. “It didn't stop his momentum and he really liked it out there. He's a very straight forward horse. He'll let you know how he's doing just by how he acts. We all joke and call him the big strong beast.”

The bay gelding had to close his final quarter in about :23.40 for his connections in order to run down favored Grade I Breeders' Cup Turf winner Magician in the final yards. “When he ran at Delaware Park (in the $50,000 Cape Henlopen Stakes), he ran his last half-mile in :47 flat and he wasn't even being asked. He just has done everything right. We knew he was training well even if he was going up in class. All he knew (going in) was that he had won three in a row; he didn't know about the field and he ran his race.”

Being a Breeders' Cup Challenge Win & You're In event for the Turf, the Million opens some appealing doors for Hardest Core. “I won't know what's next for him until I evaluate him, but we'll look at the Breeders' Cup,” Graham said. “It's a chance of a lifetime and we'll figure out the best way to maybe get there.”