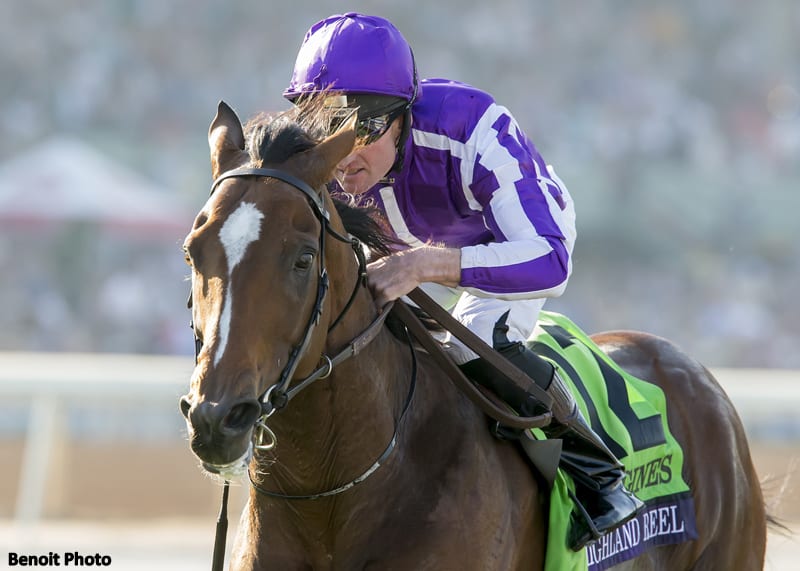 Highland Reel and the rest of trainer Aidan O'Brien's contingent may have been late arriving at Epsom Downs on Friday, but the travel delays made no difference to the multiple Grade/Group 1 winner as he powered his way to a front-running victory in the G1 Investec Coronation Cup.

The six Ballydoyle runners were late arriving at the racecourse due to problems with their plane prior to leaving Ireland.

“Nothing went right with the travel,” O'Brien told the Racing Post. “We were just expecting to take off when the fuel that was going into the plane starting going over the wing and down the other side. So everything had to be evacuated and we had to wait.

“The lads took off about 11 o'clock and were waiting at the airport from 7 o'clock.  They've been [at the track] since 2 o'clock. Everyone's been a big help and that's just the way it goes. Strange things can happen.”

While the flight problems may have caused headaches for his human connections, they proved to be no big deal to Highland Reel, who earned his fifth Grade/Group 1 victory.

Sent to the lead right out of the gate by jockey Ryan Moore, Highland Reel was alone in front through the first two furlongs, but was then joined by Godolphin's G1 winner, Hawkbill. The son of Kitten's Joy continued to press Highland Reel for much of the race before getting his head in front with just over two furlongs to run.

It looked as though Hawkbill was about to assume command of the race, but Highland Reel found another gear, and retook the lead. He then held off the late charge of Frontiersman for the victory.

Highland Reel crossed the line 1 3/4 lengths in front of Frontiersman, who was making his Group 1 debut. The son of Dubawi is out of champion Ouija Board, and is campaigned by Godolphin. Hawkbill held on for third, another 3 1/2 lengths further back.

Bred in Ireland by the Hveger Syndicate, Highland Reel was a $777,485 yearling purchase at the Tattersalls October sale. He is owned by Derrick Smith, Susan Magnier, and Michael Tabor.