Got Stormy Displays Echoes Of Tepin In Preparation For Woodbine Mile 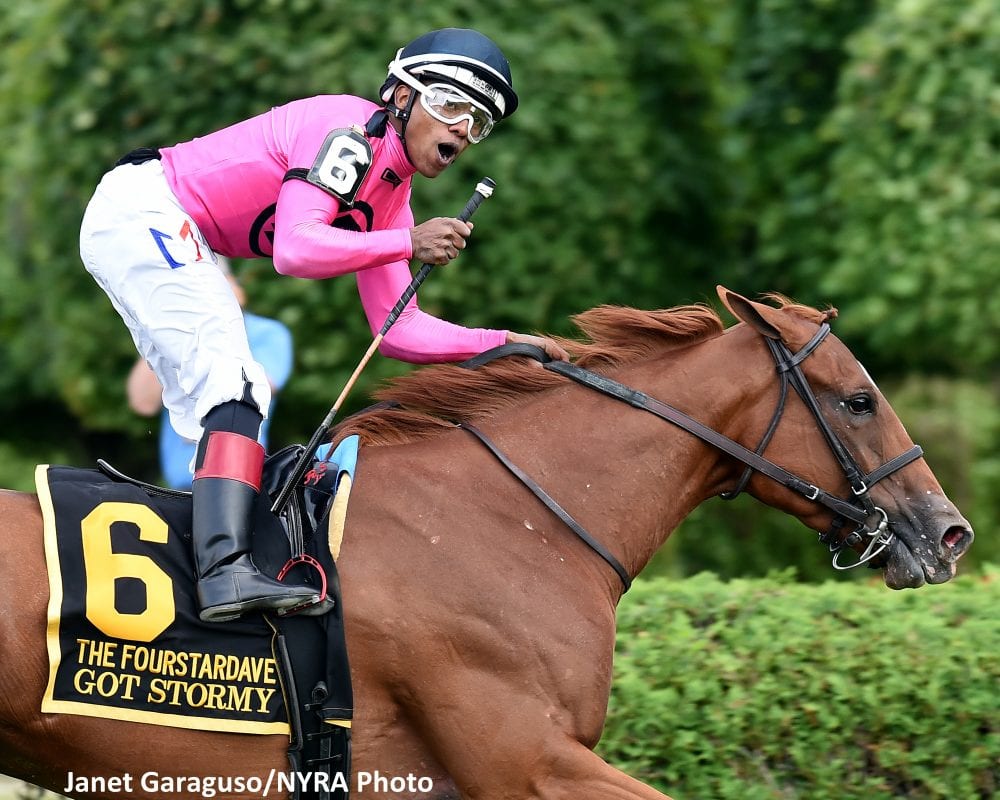 Got Stormy, shown winning the Fourstardave at Saratoga

When Got Stormy made her first Woodbine appearance last summer, she was an up-and-coming three-year-old filly who was winning her first graded stakes race in the Grade 3 Ontario Colleen over one mile of turf.

Next Saturday, Got Stormy will be the talk of the town when she returns for the Grade 1 Ricoh Woodbine Mile, an E.P Taylor Turf Course showpiece which will sport a $1 million purse on Saturday Sept. 14.

“That was one of my reasons for coming back there,” said Mark Casse, who conditions the Get Stormy-Super Phoebe filly for owners Gary Barber and Southern Equine Stable LLC. “Having had some success at Woodbine never hurts.”

Another primary reason for Got Stormy's presence in the Woodbine Mile is the fact that she will be seeking her third straight victory over one mile of turf after capturing Saratoga's restricted De La Rose and the Fourstardave, a Grade 1 race in which she defeated males just one week later.

That quick turnaround, even before Got Stormy's highly impressive performance, had become one of the “buzz” stories of the Saratoga meeting.

“I initially had planned going right from the De La Rose to the Woodbine Mile,” said Casse. “Gary was the one that pushed so hard for the Fourstardave. I gave him all the reasons why we shouldn't do it and he said, 'Okay, that's good, but unless you tell me you're not happy with her I want to run her back in a week.'

“I said, 'Okay, fair enough.' And as the week went on between the De La Rose and the Fourstardave, she just got bigger and stronger. She just started thriving. The day we entered, which would been Wednesday, I said, 'I don't think I've ever seen her train so good as we did today.”

It is inevitable that the No. 1 question that Casse will be asked heading into the Ricoh Woodbine Mile is how Got Stormy stacks up against Tepin, the supermare whom he sent out to win the Woodbine Mile in 2016. The Woodbine Mile was the sixth Grade 1 stakes for Tepin, who had captured the Breeders' Cup Mile the previous year and finished second in that race in what turned out to be her final start in 2016.

Got Stormy may have a way to go before she commands equal billing with Tepin, who also was a two-time Eclipse Award winner in the turf female category. But when Got Stormy returned with a smart allowance score in her four-year-old bow at Gulfstream this March, Casse did speculate.

“I gave her her three-year-old campaign and took her home,” said the trainer. “Same thing I did with Tepin. When (Got Stormy) won that allowance race at Gulfstream, it reminded me a lot of how Tepin had done when she came back after giving her a break. I sent the PPs to Gary Barber and said, 'It reminds me a lot of Tepin.' I wasn't comparing her yet to Tepin; I just was saying there were some similarities there.”

Now, a scant four starts later, mentioning Got Stormy and Tepin in the same breath does not seem to be fantastical.

“After her last race, it was brought to me, 'Can we compare her to Tepin?'” said Casse.  “I said, 'Well Tepin's accomplished a lot of things, but you've definitely got to think you can start talking about it a little bit. She did something no other filly's ever done when she won the Fourstardave. She did it off a week's layoff, and broke the track record by a second.

“I think you can start talking about her about being on the exceptional side. She still has a lot to do and to prove to be in the same league as Tepin but she does seem to be on her way there.”