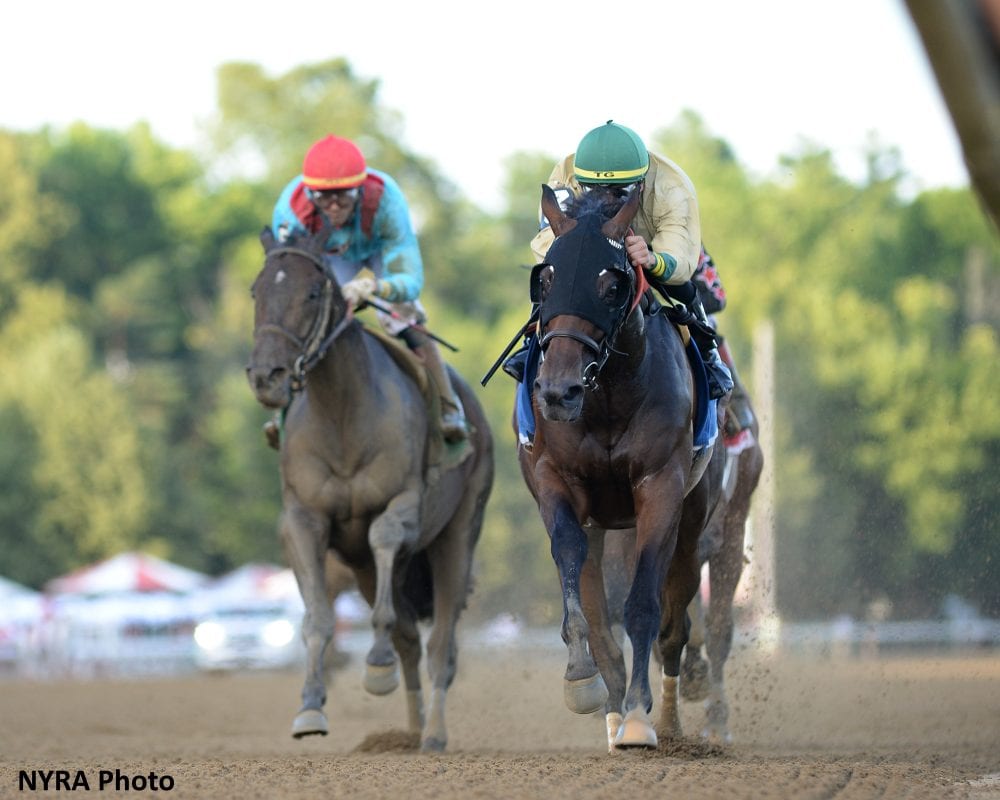 Tyler Gaffalione rode his third winner on Saratoga's Sunday card when he guided Summer Wind Equine's Golden Award to win the G3 Shuvee Stakes by 2 1/4 lengths, defeating G1 winners She's A Julie and Wow Cat. The 4-year-old Medaglia d'Oro filly was recording her first graded victory, and completed nine furlongs over the fast main track in 1:49.64. Trained by Bill Mott, Golden Award was sent off as the 3-1 third choice.

Golden Award arrived at the Shuvee from a narrow nose defeat in the Allaire DuPont Distaff on May 17 at Pimlico, but would not be denied in the Shuvee under regular pilot Tyler Gaffalione as she stalked She's a Julie through an opening quarter-mile in 25.24 seconds on the main track labeled fast.

Gaffalione urged Golden Award into gear down the back straight and took command from She's a Julie, as the duo battled head and head through a half-mile in 50.24 and three-quarters in 1:13.88.

Wow Cat, the even-money mutuel favorite making her seasonal debut out of a rallying runner-up effort in the Grade 1 Breeders' Cup Distaff, advanced three-wide through the final turn taking aim on the pacesetters.

Golden Award put away She's a Julie as the field straightened away, opening up a 1 ½-length advantage, and continued to find more as Wow Cat rallied in vain. Golden Award surged through the wire a 2 ¼-length winner, stopping the clock in a final time of 1:49.64.

“The trip set up nicely. She broke alertly and put herself in a good position,” said Gaffalione. “She was kind of keen a little bit down the backside but we were going awfully slow, so I just let her out a little bit and put my hands down and she just kept reaching and reaching. When I asked her coming into the stretch, she really exploded and finished the job.”

Gaffalione, who rode three winners on the card, credited Mott for the aggressive trip aboard Golden Award.

“Mr. Mott and I spoke in the paddock because last time she did the same thing; she ranged up there really easily and she just kind of hung,” said Gaffalione. “Today, he said, 'Don't wait on her and if you have the opportunity, go ahead and ask her and make them come get you,' and he was right. He had her 100 percent ready and all the credit goes to him and his team.”

She's a Julie held on for third, three-quarters of a length in arrears of Wow Cat. Pink Sands and Forever Liesl completed the order of finish. Skeptic, Coach Rocks and Electric Forest were scratched.

Jose Ortiz, aboard Wow Cat, said the 5-year-old Lookin At Lucky mare should improve next out off of her good return effort.

“They were going easy up front, but they were going head on at each other,” said Ortiz. “I got a shot to get outside by the three-eighths pole. She gave me a good run but the filly in front also finished up strong. It was her first race off the layoff. I think she should move forward from this.”

Bred in Kentucky by Harvey Clarke, Golden Award is out of the winning Arch mare Arch's Gal Edith and a half-sister to Kentucky Derby winner I'll Have Another. She broke her maiden in her fourth try last fall, and went right back to win a pair of allowance races. She ventured into graded company with a fourth and second, but the Shuvee is her first graded win. Overall, the filly has four wins from nine starts and earnings of $300,000.

Correction: The original version of this article listed Golden Award's trainer incorrectly. The filly is trained by Hall of Famer Bill Mott.