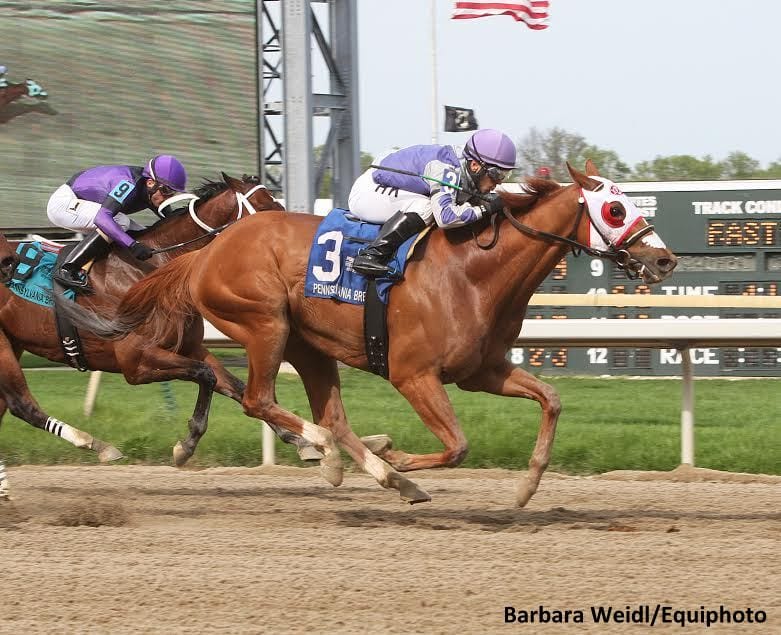 Parx Racing opened its stakes schedule with a pair of stakes for state-breds Saturday afternoon, the $100,000 Lyman Stakes and the $100,000 Foxy JG Stakes. The Lyman for the boys, the Foxy JG for the ladies, both contested at seven furlongs.

The Lyman Stakes was won by the amazing Page McKenney. The 7 year-old gelded son of Eavesdropper, a stakes winner many times over, won for the 18th time in his terrific career under the care of trainer Mary Eppler, putting in a determined rally to catch leader Duval with only a sixteenth of a mile to go and then edged away late to win by just over a length. He raced in close pursuit almost the entire way, sitting third down inside and only about a length and a behind until the leaders neared the quarter pole.

Winning jockey Horacio Karamanos then eased him out into the three path to get a clear shot at the front runners and from there, Page McKenney simply put his head down and grinded away. With a furlong to go, Duval was in front, still going well and gamely trying to hold on, but Page McKenney was simply relentless, slowly wearing him down, gaining steadily and finally getting the lead nearing the finish. With the win, his earnings surpassed $1.5 million. Racing for Adam Staple & Jalin Racing Stables, he went off as the 8-5 favorite and paid $5.20 to win. He finished the seven furlongs over a fast track in 1;23.38.

The Foxy J G Stakes went to Discreet Senorita. The 5 year-old Discreet Cat mare was unhurried through the opening stages but well placed, third with a half mile to go and sitting about three lengths off the lead held by defending champ, Disco Chick. After a relatively slow first quarter of 23.42, Disco Chick tried to open the race up in the second quarter, quickening to the far turn with a half in 46.06. Discreet Senorita lost a bit of ground at that point and with three-eighths to go, found herself almost five lengths back.

Winning jockey Frankie Pennington showed no panic. He began to get his mount in gear approaching the quarter pole and started to quickly close the gap.  Disco Chick was starting to tire a bit, and now in full flight, Discreet Senorita surged past in the middle of the racetrack about a furlong from home and began to pull away.  Long shot Heatherly was running along well down at the rail, but would never threaten the winner as Discreet Senorita rolled home a solid two lengths in front.  Owned jointly by Dun Roamin Farms, Inc. and Rosemore Farms, Inc. and trained by Ed Lehman, Discreet Senorita went off at 5-1 and paid $13.40 to win.  She finished out in 1:23.76.