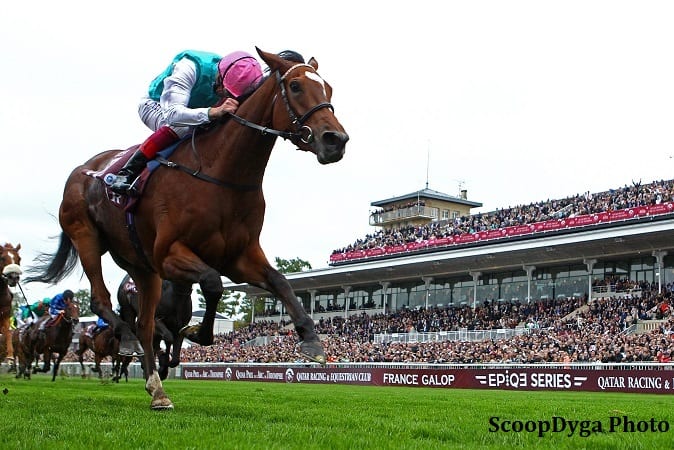 Enable is likely to make her eagerly-anticipated seasonal debut in either the Tattersalls Gold Cup or the Investec Coronation Cup.

John Gosden's filly enjoyed a spectacular three-year-old campaign in 2017, completing the English-Irish Oaks double before going on to beat her elders in the King George, the Yorkshire Oaks and the Prix de l'Arc de Triomphe.

Connections have sportingly kept her in training for another year and she is set to return either at the Curragh on May 27 or at Epsom five days later.

Teddy Grimthorpe, racing manager for owner Khalid Abdullah, said: “Enable is in very good form. She got put back a little bit by the cold weather in Newmarket, like most fillies she would prefer it warmer than colder. She is coming on well and is happy and cantering.

“She has not been asked to do anything spectacular yet, but everyone seems pleased with her.

“I think it is likely the Prix Ganay will come too soon for her with the way she is. It is not entirely ruled out, but I would suspect it has come a bit too soon. That leads us on to either the Tattersalls Gold Cup at the end of May or the Coronation Cup.”

Grimthorpe confirmed an Arc defence was top of Enable's agenda – but connections are also keen to aim for the Juddmonte International at York in August.

“Really and truly the main aim is the Arc, probably preceded by the Juddmonte and the King George,” Grimthorpe continued.

“Prince Khalid likes to try and win his races if he can, as any sponsor does, and the Juddmonte is a very important race to us in every way. I don't see why that won't be on the agenda, but the defence of the King George is also important and at the top of the tree is the Arc.”

Grimthorpe believes there is every chance Enable will clash with esteemed stablemate Cracksman this season, adding: ” I don't think Anthony Oppenheimer (Cracksman's owner) would have any qualms taking us on and we certainly wouldn't have any taking on him.

“I think it is important for the top horses to be taking each other on for the top prizes.

“It is exciting for racing fans and it gives a lot to the season. You have two top-class horses returning and at that level. I certainly think it will be fascinating.”