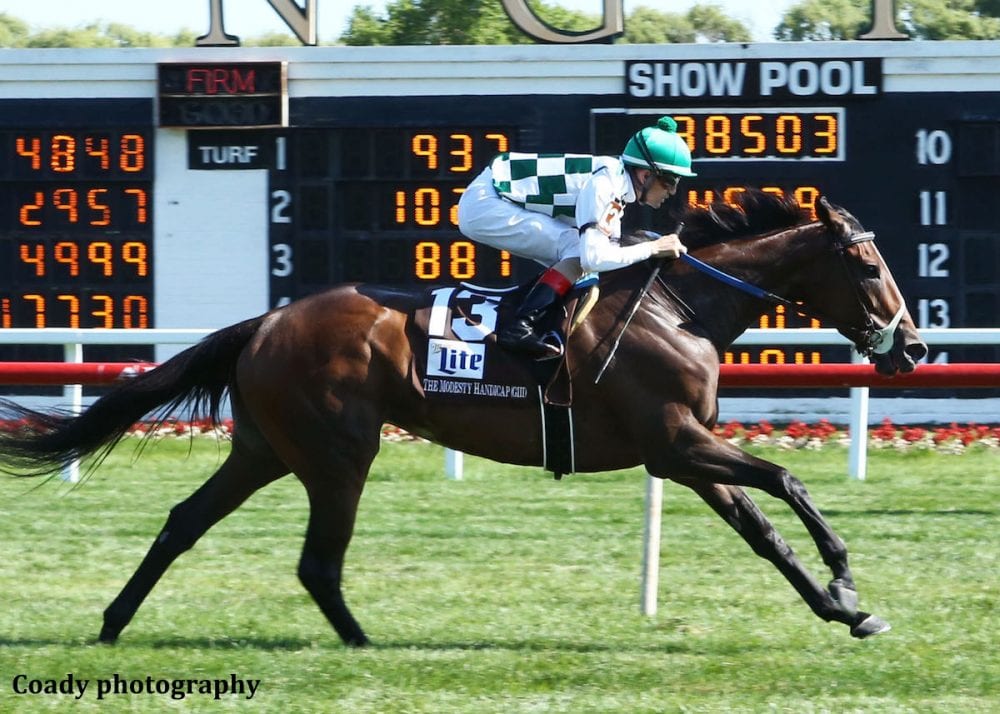 Under Brian Hernandez Jr., the 4-year-old filly by the late Scat Daddy overcame the outside 13 post position in the 1 3/16-mile turf race, tracking the early leaders, taking command on the turn for home and winning in hand for owner-breeder Normandy Farm and trainer Ken McPeek. She covered the distance in 1:53.80 under top weight of 124 pounds under the handicap conditions of the Modesty and paid $5.80 as the 9-5 favorite.

Multiple stakes winner Sully's Dream was pulled up with an injury at about the 5/16 pole. She walked into the horse ambulance and was being evaluated by veterinarians.

Go Baby Run and Sully's Dream vied for the early lead through fractions of :22.71, :47.06 and 1:11.14, with Daddys Lil Darling on the outside of the second flight. Sully's Dream dropped back into the far turn and Daddys Lil Darling moved quickly to the lead, opening a clear advantage at the top of the stretch with three-sixteenths to go, the opening mile in 1:36.40. She was never threatened down the lane.

The win was the fifth in 19 career starts for Daddys Lil Darling, who also ran second in the G1 Ashland Stakes and Kentucky Oaks on dirt and the G1 Queen Elizabeth II on turf.

“I didn't give (jockey Brian Hernandez, Jr.) any instructions,” said McPeek. “From the 13-hole it's tricky and we've got complete confidence in Brian, whatever he decided. It was great that she showed early speed – she's had some races where she kind of went too back and had a hard time getting through traffic, but I don't know if it was the course or Brian's hands or whatever, even the class of the race, but it's a big deal to see her laying closer.”

“She was the class of the race,” said Hernandez. “The best thing to do with her today was just stay out of her way, let her find her rhythm, and that's what she did. Kenny had her so prepared today that all I had to do was just kind of be a good passenger, and she's a Grade I winner, she knows what she's doing out there – I just let her do her thing.”

McPeek indicated that Daddys Lil Darling could return to Arlington International Racecourse for the Beverly D.

“She's a world traveler, she's been everywhere,” said McPeek. “The Beverly D. is such a wonderful race to even participate in, but for her to have this kind of performance going in it's going to make us pretty confident next month.”

The Modesty was one of four graded stakes on Ride to the Million day.