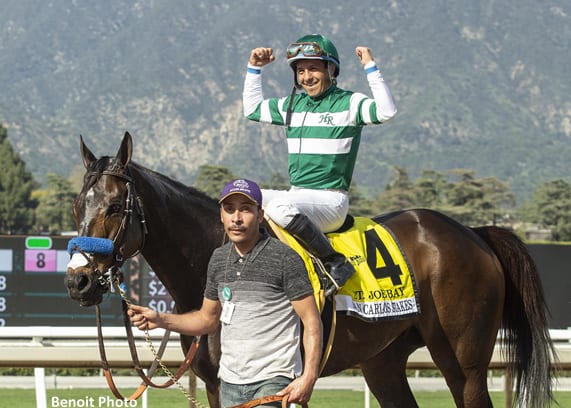 While John Sadler came out on the wrong end of one of the most excruciating photos of his training career a race earlier, he endured no such trepidation in the Grade II, $200,000 San Carlos Stakes at Santa Anita on Saturday, as Hronis Racing's longshot St. Joe Bay led gate to wire to win by three lengths under comebacking Victor Espinoza. A three-time Kentucky Derby winner and member of racing's Hall of Fame, Espinoza registered his first win since going to the sidelines with a broken neck this past summer at Del Mar as St. Joe Bay stopped the clock for seven furlongs in 1:24.06.

“It feels great to be back in the winner's circle,” said Espinoza. “It's very encouraging to go forward in my career after what happened. This has put me on a different level, mentally as well after what happened. I thought I would never be back to ride. It was not easy not riding (during the past three week period).”

A two-time graded stakes winner at age five, 7-year-old St. Joe Bay, who was claimed for $62,500 seven starts back on May 28 of last year, out-footed 6-5 favorite Ax Man for the early lead and was in command throughout and somewhat assuaged a desperate nose defeat sustained minutes earlier by his stablemate Catapult, in the Grade I Frank E. Kilroe Mile.

Dr. Dorr, who assumed the mantle of “the other Baffert,” when compared to his heavily backed stablemate Ax Man, shifted to the rail while next to last three furlongs from home and make a solid run through the lane to finish second, 1 ¼ lengths in front of Kanthaka.

The second choice at 5-2, Kanthaka, who was ridden by Rafael Bejarano, finished 3 ¼ lengths clear of Solid Wager and paid $3.60 to show.

Ax Man, with Drayden Van Dyke up, checked in fifth.