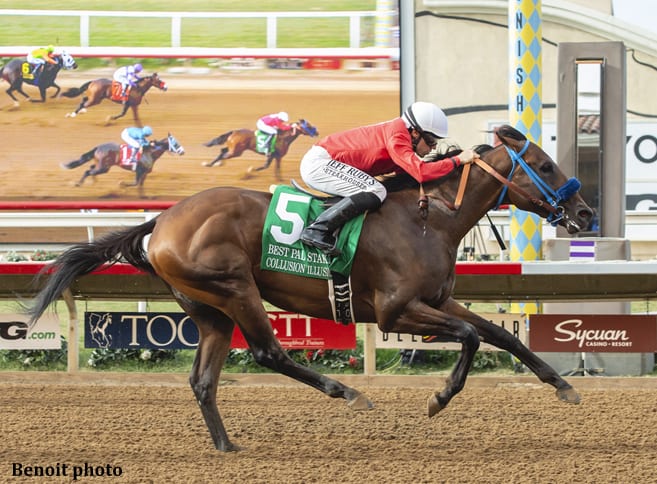 In just the second start of his career, the bay colt Collusion Illusion raced to a $17.40 upset over five rivals in the Grade II Best Pal Stakes for 2-year-olds Saturday at Del Mar. The winner clicked by a length and a quarter under rider Joe Talamo.

Finishing second in the six-furlong headliner carrying a $200,351 purse was an unlucky Wrecking Crew, who broke badly and spotted his rivals several lengths to start, then came back to close belatedly behind the winner. Finishing third a neck farther back was Fore Left.

Collusion Illusion, a $300,000 purchase at the OBS April sale of 2-year-olds in training, covered the Best Pal distance in 1:11.34 and earned a check for $120,000. He had won his other start in a straight maiden race at Del Mar on July 21 for trainer Mark Glatt. He now has earnings of $156,600. The Florida-bred by Twirling Candy is owned by three Washington State residents – Dan Agnew (Vancouver), Gerry Schneider (Auburn) and John Xitcod (Tacoma).

Kaleem Shah's Schrodinger, who was the race's 2-1 morning line favorite, was scratched early Saturday, reportedly for running a fever.

The Best Pal is considered the major prep race for the track's foremost juvenile stakes – the $300,000, Grade I Del Mar Futurity at seven furlong on closing day, September 2.

The jockey star for the day was the track's leading rider, Flavien Prat, who rode five winners from seven mounts. He came into the day with 20 winners, putting him three ahead of Drayden Van Dyke. He is now at 25 winners in 19 days of racing and has moved eight ahead of Van Dyke, who was blanked on the card.

JOE TALAMO (Collusion Illusion, winner) – “I had the beautiful trip. And the speed set it up right. I was impressed with my horse the way he gutted it out down the lane. And I think the farther the better with him. Wait 'til he goes seven eighths or two turns. Then you're going to see the best of him.”

MIKE SMITH (Wrecking Crew, second) – “I don't know what happened. He was ready for it (the break). And then he just took a left on me. I don't know if he saw the (No.) 2 horse, or what. And I don't want to take anything away from the winner, but I sure would have like to have seen what would have happened (if he had broken properly).”

MARIO GUTIERREZ (Fore Left, third) – “I thought I was going to be the winner. But then he got a little bit tired at the end. But he'll bounce back.”

MARK GLATT (Collusion Illusion, winner) – “He's been nothing but a pro from Day One since we got him after the sale. He was probably ready earlier than the race he actually debuted in (July 21 win here) but we decided to wait for Del Mar and we're extremely pleased with him. This race came up a little bit quick, I usually like to give a horse more time after his debut, but he's such a classy horse and he never missed a bite of grain. I thought about running him back in the Futurity but who knows what will happen between now and September and he was ready to run now. I wouldn't rule out the Futurity. That might be a little too aggressive with him, but we'll keep it as an option.”

The stakes win was the first of the meet and first in the Best Pal for rider Talamo. He now has 54 stakes wins at Del Mar.

The stakes win was the first of the meet and the first in the Best Pal for trainer Glatt. He now has eight stakes wins at Del Mar.