Bee Jersey holds on in the Met Mile

Leading the field from start to finish, Charles Fipke's homebred Bee Jersey was able to hold on by a nose over Mind Your Biscuits in Saturday's Grade 1 Runhappy Metropolitan Handicap. The 4-year-old son of Jersey Town, ridden by Ricardo Santana, was sent to post as the 3-1 favorite on a three-race win streak. Trained by Steve Asmussen, Bee Jersey covered a mile over Belmont Park's fast main track in 1:33.13, earning an expenses-paid berth to the Breeders' Cup Dirt Mile this fall at Churchill Downs.

“He's a tremendous horse with a lot of talent,” said Asmussen. “We're very fortunate that Mr. [Charles] Fipke sent him to us and I'm glad he was able to win the Met Mile today. We all know what the race means, for him [the owner] to have bred him and run him what a source of pride.”

Bee Jersey was extremely sharp out of the starting gate, taking the lead by about a length in the first 100 yards. Bolt d'Oro rushed up the inside to prompt a first quarter in :23.08. One Liner was also close to the pace, along with Warrior's Club and Limousine Liberal just ahead of Mind Your Biscuits. Through a half in :45.71, Bee Jersey held a 3/4-length lead over One Liner, but that rival drew ever closer through the far turn.

“The horse broke sharply like he always does,” said Santana. “We were sitting in a nice spot. I loved the position I was in for the first quarter [mile]. I slowed down and he came back to me. He was in a great position and when I turned for home, I let him go a little bit. He ran an amazing race. My horse is a fighter and he showed it today. He was waiting for the other horses and when my horse felt [Mind Your Biscuits], he took off again. He gave me a second kick to pass the wire first.”

Mind Your Biscuits was making his first start back since defending his title in the Group 1 Dubai Golden Shaheen. The richest New York-bred in history pleased trainer Chad Summers with his big Met Mile effort:

“He shows up every time,” said Summers. “Joel [Rosario] gave him a perfect ride. I think he showed them he can go a mile. All credit to Bee Jersey. Ricardo put him in front and got away with a 23 first quarter. It's tough to make up that much ground with that opening quarter.”

Limousine Liberal finished third, 5 1/4 lengths back from Mind Your Biscuits. Kentucky Derby also-ran Bolt d'Oro finished last. Discreet Lover finished fourth but pulled up after the race and was taken back to the barn by ambulance. The 5-year-old walked into the equine ambulance under his own power. 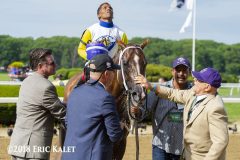 Bred in Kentucky by his owner, Bee Jersey is out of the stakes-placed Rahy mare Bees. As a yearling, the colt commanded $250,000 at the Keeneland September sale, but he was unable to find the winner's circle through four starts in Dubai. Returning to the United States and Fipke's ownership, Bee Jersey won at first asking at Keeneland, and has not been worse than second since. Last out, the colt earned his first graded stakes win in the G3 Steve Sexton Mile. Overall, Bee Jersey's record stands at 5-3-1 from 10 starts for earnings now over $1 million.

“The draw was perfect for him,” Asmussen continued. “It played out the way we wanted. He broke cleanly, Ricardo got away with a very soft first quarter then they applied pressure on him from there. Twenty two and change for the second quarter, then the race was on in the third quarter and thirty three to a mile. He's a fabulous miler. This was the goal with the horse at the beginning of the year and now I think we'll regroup from here and think of how to get him to the Breeders Cup Dirt Mile in the best condition. [At the sixteenths-pole] He looked good. When he got away from there cleanly like he did I loved it. He picked it up to the wire.”