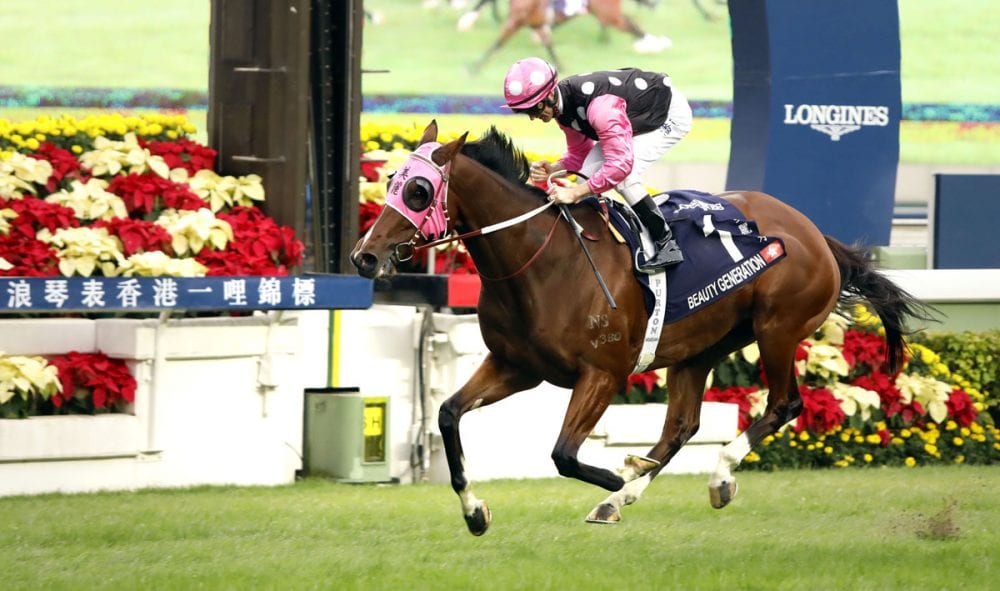 Beauty Generation is a two-time winner of the LONGINES Hong Kong Mile.

Zac Purton concedes he's blessed to sit atop the world's best miler Beauty Generation – the horse who seeks a ninth consecutive win in Sunday's (28 April) G1 HK$18 million (US$2.3 million) Champions Mile. The horse who, some might claim, is the best in the world given the recent retirement of Winx.

The 36-year-old Australian-born, Hong Kong-based, jockey also sits on top of the world or as near as one can be it seems. At the peak of his professional game; 1000 Hong Kong wins beckoning; confirmed status among the world's best riders; International G1 winners on the CV; a happy, healthy family and a champion horse to ride.

Purton acknowledges the significance of Beauty Generation to his career and life in general while insisting every win is significant to him and that the seemingly invincible “Master Miler” is not integral to maintaining his motivation to succeed.

“Life is good,” Hong Kong's reigning champion says, “things are going well on the track. The family's good off the track. I'm enjoying my life, where I am, what I'm doing. I'm very lucky.

“And it's a privilege to be given the opportunity (to ride Beauty Generation). I suppose it was the one thing lacking on my cv, a horse like him. I'd never before had an association with a champion if that's what you want to call him and I suppose that's what people are calling him now. It's nice to have one and hopefully we can keep making the most of it. He's the best horse I've ridden.”

Purton stops short of declaring his undying love for the horse which is in keeping with his renowned steely, focus but respects the animal and concedes his presence adds a little “spring to his step” most mornings.

“I couldn't say I love him in the sense you love someone but he's been a great horse to me and hopefully he continues to be a great horse. Only having the two meetings per week and just going through the grind of it week in and week out, of course you do look forward to riding the quality horses in the big races at the big meetings and it's nice when a special horse like him comes along.

“It makes it more enjoyable. He's a fantastic horse. I don't need him to continue to stay focused and keep doing what I'm doing but it does give you that extra little bit of joy to be able to come to the track every day and look forward to riding him when he gets to the races,” he said.

As to what makes Beauty Generation so good, Purton says that's difficult to pin-point but he does believe the gelding's responsiveness to whatever he's asked to do, in a race, is a key factor.

“Yes, he is versatile and responsive so in that regard he's a really nice horse to ride and that's part of his strength. You can ride him on a lovely long rein, he just drops his head and cruises along. He's a horse that does what you want him to do in a race.

“Clearly, he's a horse who likes to lead, he likes to bowl along. As I've said before I think he's very effective in fast run races because he can absorb that pressure and he just seems to cruise so comfortably and then he can kick off that speed. Horses trying to stay with him seem to fall in a hole and the ones back in the field have a lot to do to try to catch him,” Purton said.

It's fair to say Purton has conquered Hong Kong. Even if he did have to lay siege to Douglas Whyte for quite some time before ending the South African's 13-season dominance with his first Hong Kong jockeys' championship in 2013/14 (112 wins).

Fair to say even if he did then play second fiddle, for three years, to Joao Moreira before halting the Brazilian's title streak at three with a relentless chase to take his second premiership win in 2017/18.

This season's championship is all but in the bag and there's no sign of any release of the foot on the accelerator for the man who works hard, trains hard and like most successful sportsmen can be one tough cookie when he steps into the ring.

He asks no quarter, gives no quarter; has no compunction about chasing plum rides which is all part of the business in Hong Kong and doesn't mind playing the odd mind game with his rivals. And yet for all his competitiveness, he has a generally clean slate when it comes to the stewards' room.

And, along the way, there's been any number of highlights here and abroad. All not bad for the boy from Lismore, New South Wales, who was widely accused of lacking focus and motivation as an apprentice jockey despite winning a Brisbane Jockey's premiership while still a junior jockey.

Does one highlight stand out among his 956 winners in Hong Kong (as of 16 April) or his international Group 1 wins in England, Australia, Japan and Singapore.

“I have so many great memories here in Hong Kong, it's hard to single out one. My first winner in Hong Kong was fantastic and winning the Derby on Luger was obviously a highlight as well.

“But, you know, I get just as much joy out of winning the midweek races as I do winning the Group 1's. The Group 1's are the races we aspire to, of course, and they're the races I like to perform in and I like to find the right horses to be able to perform in those races but I still get a lot of satisfaction out of winning any race at Happy Valley on Wednesday, as much as I do at Sha Tin at a marquee meeting.

“Overseas, once again there have been many good moments. Little Bridge at Royal Ascot was fantastic. I'd never been to the UK before so to get off the plane and win a race like that at their biggest meeting was something else. I didn't appreciate it as much at the time as I do now. I'm one for one there. To be able to go there and compete and win at that meeting was nice.

“Aerovelocity winning in Japan was special. It's very hard to win in Japan against their horses there. They've got a lot of depth to their races. You're not just taking on one horse you're taking on about 10 or 12 every time you go there so it's really, really hard. And to what he did under the circumstances, you just don't see horses win the way he did that day. He looked like he was gone around the corner at the top of the straight, but he got a second win and surged late.

“That emotion that goes through you from thinking it's all over to boom, you've got the job done was very special. That was very nice,” he said.

Purton's first win in Hong Kong was aboard the Ricky Yiu trained Elfhelm on 12 September, 2007 at Happy Valley. He had just three rides that night and each was double figure odds. He's come a long way since.