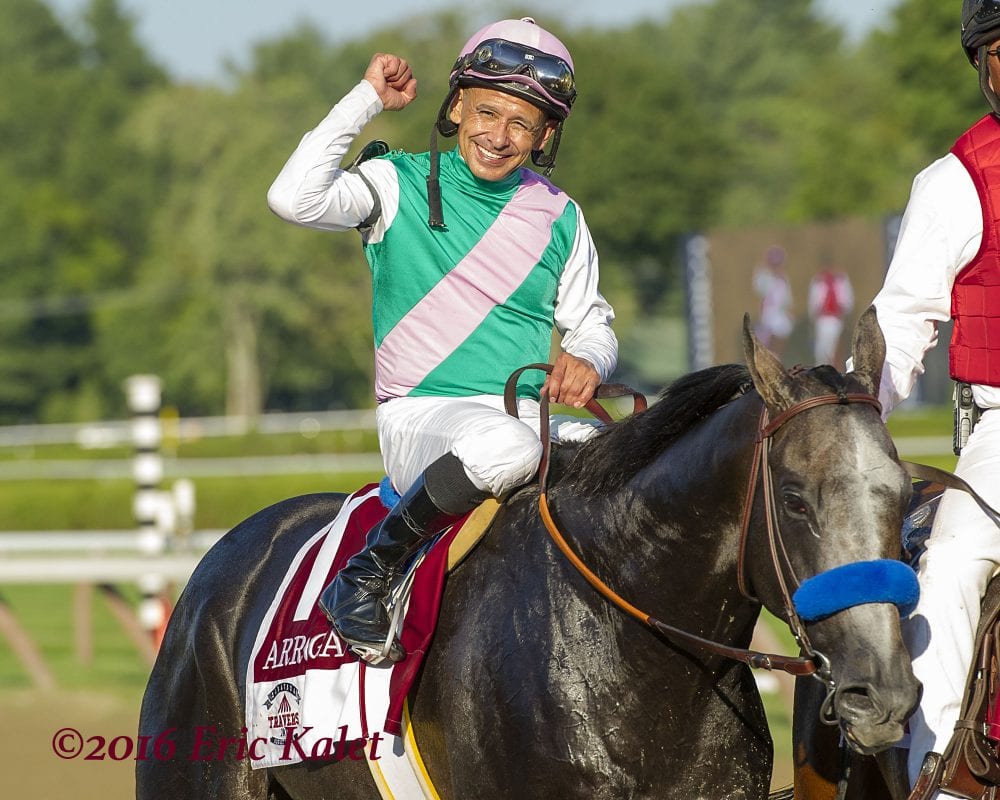 Arrogate, under Mike Smith, won the 2016 Travers in track record time for a mile and a quarter

Whitney Stake's winner Frosted (1 first-place vote; 364 points) remains in second for Godolphin Racing and trainer Kiaran McLaughlin. It is anticipated that the son of Tapit's next start will be the GI Woodward Stakes this Saturday at Saratoga. In third is Tepin with (339).

For the second year in a row, the GI Longines Sword Dancer “Win and You're In Breeders' Cup Turf Divisional” winner Flintshire (309) moves into fourth place for Juddmonte Farms and trainer Chad Brown after his sensational 1 ¾ length victory this past Saturday at Saratoga.  The son of Dansili is being targeted for the G1, $600,000 Joe Hirsch Turf Classic Invitational on October 1 at Belmont Park.

The undefeated 3-year-old filly Songbird, (305) with a perfect total career of ten starts with ten wins moves into fifth place. The Eclipse Award champion could possibly make her next start in the G1 Cotillion Stakes at Parx Racing, September 24.

Joining the Poll for the first time ever is Travers Stakes winner Arrogate (189) who jumps into the ranks in sixth place.  The Bob Baffert trainee made the history books Saturday, winning the Grade 1 event in a record time of 1:59.36 seconds at Saratoga Race Course, smashing General Assembly's 1 1/4-mile stakes and track mark of 2:00 flat set in 1979.

Ranked seventh is the three-time Eclipse Award champion Beholder (181). The Pacific Classic winner of 2015, Beholder came in second to California Chrome in this year's running.

The full results for both NTRA weekly Thoroughbred polls can be found on the NTRA website.