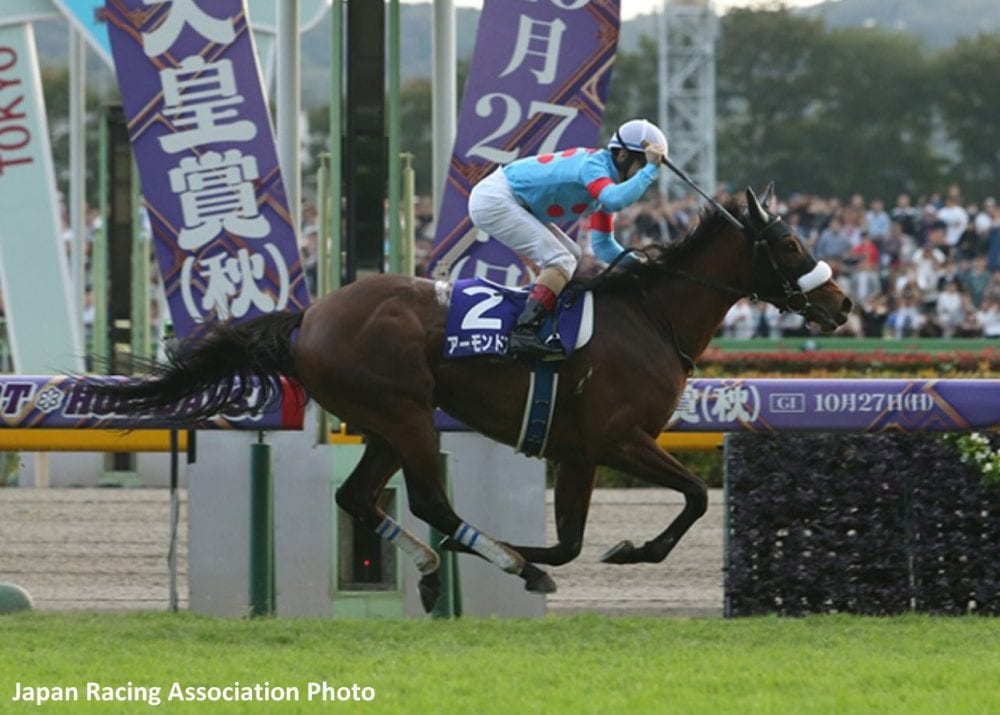 This year, after capturing the Dubai Turf (G1), Almond Eye registered a third in the Yasuda Kinen (G1) where she encountered a disadvantage immediately after her break. This Tenno Sho (Autumn) triumph is trainer Sakae Kunieda's 16th JRA-G1 victory—his latest was last year's Japan Cup with the filly and latest Tenno Sho win was in the spring version of 2009 with Meiner Kitz. For jockey Christophe Lemaire, who had won last year's version with Rey de Oro and this year's Tenno Sho (Spring) with Fierement, this is his 27th JRA-G1 title—his most recent was the Sprinters Stakes victory with Tower of London four weeks earlier.

As expected, Aerolithe went straight to the front and set a slow pace with Stiffelio and Saturnalia on her heels while Almond Eye, who broke from an inner stall, was reserved in sixth to seventh on the rails. The field maintained its form of a long line entering the lane, giving little room for Almond Eye to shift out for her run. However, Christophe Lemaire calmly waited in early stretch and let the filly shoot out on an inner path, swooping past all competition by the furlong marker to cruise to a convincing three-length win.

“She was well rested after a long break and showed her true strength today. We were able to follow Aerolithe and Saturnalia in a good position, found a good opening on the rails and she just stretched beautifully from there. Personally, I'm delighted to have won the last Tenno Sho of the Heisei era and the first of the Reiwa era,” commented Christophe Lemaire.

Third favorite and 2017 Best Two-Year-Old Colt Danon Premium traveled a half-length in front of the eventual winner in fifth up to the final turn, fought with Aerolithe, Saturnalia and Almond Eye briefly before the furlong pole and secured the runner-up seat, holding off the persistent challenge from Aerolithe by a neck.

Sent off sixth favorite, five-year-old mare Aerolithe set the pace spurting well from stall five and although no match for the winner, dug in strongly fending off the strong closing You Can Smile and Wagnerian for third.