After Jaunt To Ascot, Karak Is Back And Has Eyes On G3 Matron 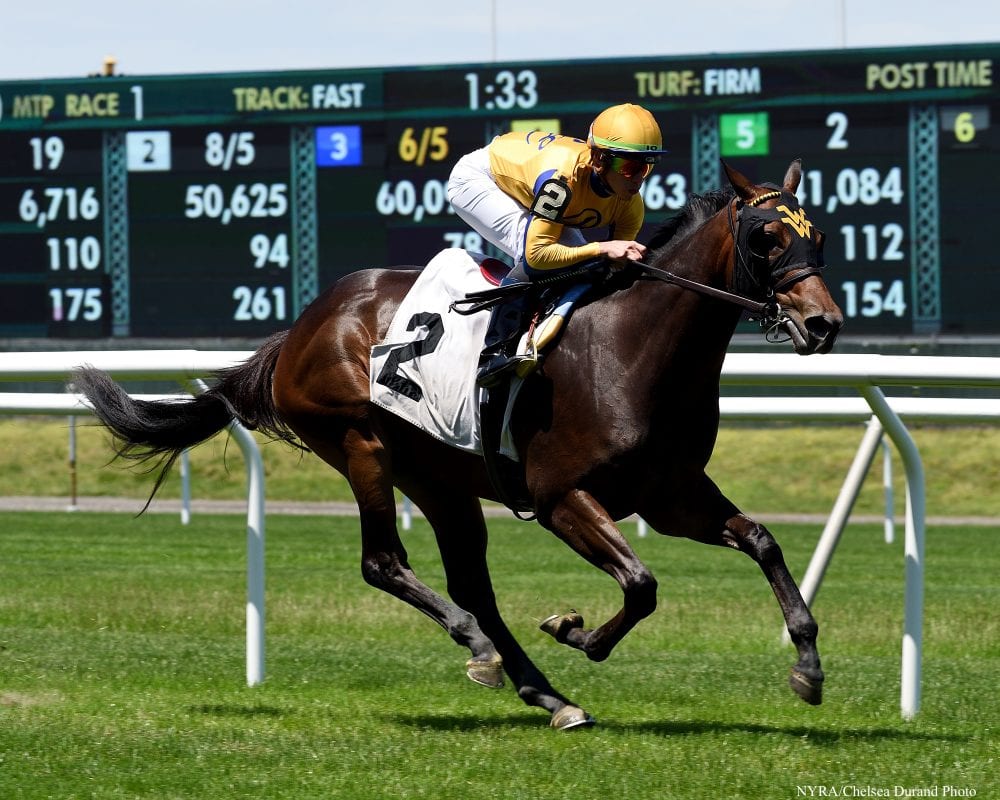 Karak will contest the G3 Matron for trainer Wesley Ward

The Matron will join a stacked undercard on the first day of the Joe Hirsch Turf Classic Racing Festival, which will feature four 'Win and You're In' qualifiers to the Breeders' Cup over the course of the weekend. On Saturday, the Matron will be accompanied by the Grade 1, $500,000 Joe Hirsch Turf Classic, the Grade 1, $500,000 Champagne, the Grade 2, $400,000 Hill Prince and the $150,000 Belmont Turf Sprint Invitational.

Karak, owned by Breeze Easy LLC, will look to sustain Ward's prolific record with 2-year-olds, entering a race restricted to her own gender for the first time in her career. The precocious bay filly debuted successfully over Belmont's Widener turf course in May, beating a field of males by three lengths before shipping overseas to contest the Windsor Castle Stakes at Royal Ascot, where she also faced open company. The daughter of Karakontie faded to finish 15th in the Windsor Castle over soft ground, but promptly rebounded upon returning stateside by taking the Tyro Stakes at Monmouth Park by 2 ½ lengths.

“She's been doing really good between races; her works at Keeneland have been great,” Ward said. “Her race at Ascot happened right after a downpour, the heavens opened up, and it was a soft, soft turf. I definitely think she's going to appreciate a firmer turf. We're ready.”

Karak drew post 5 and will be ridden by Irad Ortiz, Jr.

Impressive debut winner Alms will go out for trainer Michael Stidham and Godolphin. The bay filly by City Zip debuted over Belmont's Widener turf on September 19 and showed a potent late kick to win by 3 ¾ lengths at odds of 3-1.

“We had liked her early on,” Stidham said. “She had shown a lot of talent in the mornings, which is the reason we shipped her to Belmont. We thought she was above average, so we took a shot and she ran really well. When you get horses like her, you have to get results, so we're happy.”

The Matron wasn't on the radar for the connections before Alms' maiden victory, but it quickly became part of the plan after, even despite the short turnaround between races.

“We planned on having her ready to go first out, and we certainly weren't thinking past that, but she ran so well and it looked like a logical spot to try,” Stidham said. “She bounced out of the race well and looks great on the track.”

Jose Lezcano will be aboard Alms, and the pair will break from the rail.

Trainer Mike Maker will send out a pair of New York-bred fillies, A Freud of Mama and Time Limit, who will venture outside of the state-bred ranks for the first time in their careers. The former, a William Butler homebred, didn't show much in her debut at Saratoga Race Course but turned in a much more professional effort at second asking on September 13 at Belmont, where she took a maiden heat by 1 ½ lengths while adding blinkers.

Her stablemate, Time Limit, is the more experienced of the two, having made four starts thus far in her career, but she has yet to try turf. The daughter of Bustin Stones nearly won the Seeking the Ante on August 23 at Saratoga but most recently finished a distant fourth in the Joseph A. Gimma on September 18 at Belmont.

A Freud of Mama drew post 2 and will be ridden by Ricardo Santana, Jr., while Time Limit will break from her immediate outside with Manny Franco in the irons.

Rounding out the field are Pure Wow, a John Terranova-trained maiden who has yet to run over turf, and Classy Sadie, who finished fourth in an optional claimer on the turf last out at Laurel Park.