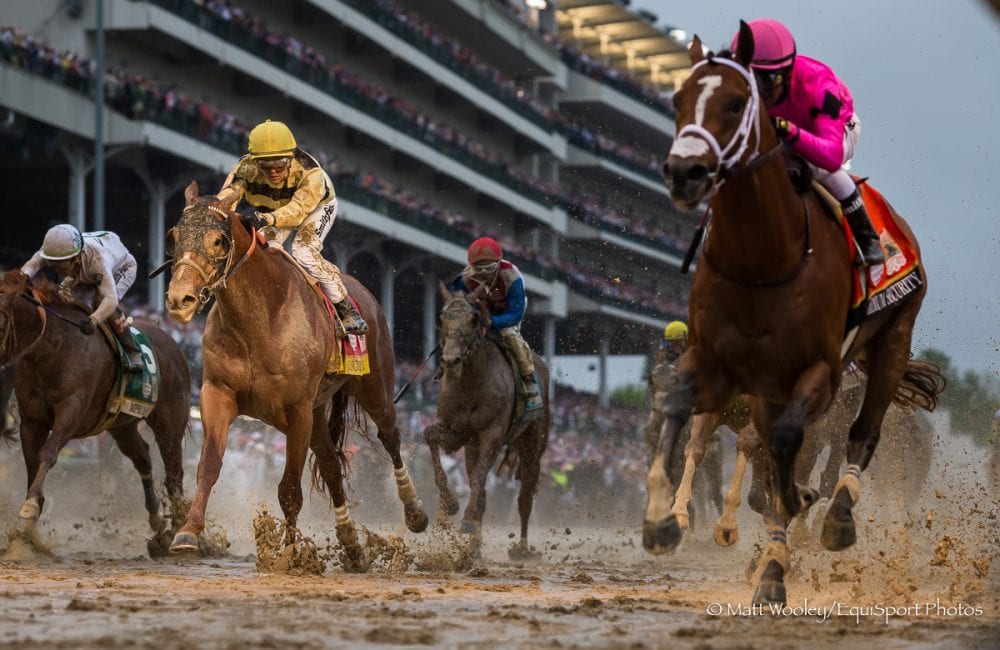 The 145th running of the Kentucky Derby

Gary and Mary West have filed a federal lawsuit against the Kentucky Horse Racing Commission over the stewards' disqualification of Maximum Security – a horse they bred and own – from a victory in the May 4 Kentucky Derby The lawsuit was reported in the Lexington Herald-Leader.

Named in the suit, according to the newspaper, are the racing commission and its members, staff and stewards. It was filed Tuesday in U.S. District Court in Frankfort.

The Wests appealed the disqualification to the Kentucky Horse Racing Commission, but that was swiftly denied because Kentucky's rules of racing state that stewards' decisions concerning the running of a race are final and not subject to appeal.

Saez subsequently received a 15-day suspension from the stewards – two of whom work for the Kentucky Horse Racing Commission and one of whom is employed by Churchill Downs. Gary West has claimed Tyler Gaffalione, the rider of War of Will, was to blame for the incident because he allegedly allowed his mount to run up into the hind legs of Maximum Security.

The Herald-Leader said the lawsuit calls the disqualification “bizarre and unconstitutional” and seeks to install Maximum Security as the official winner. Maximum Security is the first horse to be disqualified from first place for interference in the 145-year history of the Derby. The 1968 winner, Dancer's Image, was disqualified for a medication violation that led to years of litigation by owner Peter Fuller. Forward Pass, the second-place finisher, is the official winner of the 1968 Kentucky Derby.

On Wednesday, the Wests issued the following press release:

“Gary and Mary West have filed a lawsuit in the United States District Court for the Eastern District of Kentucky, Lexington Division, against the Kentucky Horse Racing Commission, the stewards at Churchill Downs and others seeking to overturn the disqualification of Maximum Security in the Kentucky Derby.

“According to the complaint filed with the court the nature of the action is as follows:

“The Kentucky Derby is the most prestigious horse race in the world. In 144 prior runnings of the Kentucky Derby no horse that crossed the finish line first had ever been disqualified because of a foul in the race. That changed when, in the 145th edition of the Kentucky Derby (“Derby”), number 7, Maximum Security, an undefeated three-year-old colt ridden by jockey Luis Saez and owned by Gary and Mary West, crossed the finish line first by 1¾ lengths only to be disqualified by the Stewards to seventeenth. The insubstantiality of the evidence relied on by the stewards to disqualify Maximum Security, and the bizarre and unconstitutional process to which the Plaintiffs were subjected before and after the disqualification, are the subjects of this action.

“The Stewards had the responsibility to supervise, control, and regulate the running of the Derby.

“Having not observed any foul or interference, there was no inquiry by the Stewards into the running of the Derby.

“The jockey (Flavien Prat) who finished on the horse who ran second (#20 Country House) to Maximum Security, despite the absence of any inquiry by the Stewards, lodged an objection against Maximum Security alleging interference.

“The Stewards disallowed Prat's objection because it was meritless.

“After Prat objected the jockey (Jon Court) on the horse who finished seventeenth in the Derby (#18 Long Range Toddy) lodged his objection against Maximum Security.

“The Stewards sustained Court's objection even though that horse (Long Range Toddy) beat only two of the 19 horses in the race.

“As a result of Court's objection, Maximum Security was disqualified from first to seventeenth.

“Country House was moved up from second to first as the result of the disqualification.

“The Stewards announced their decision to disqualify Maximum Security in a room filled with representatives of the media and other persons.

“The Stewards' statement was broadcast to millions of people around the world via television, the internet, and various streaming devices.

“The statement said: 'We interviewed affected riders' and 'determined' that Maximum Security had 'drifted out and impacted the progress of Number 1 (War of Will), in turn interfering with the 18 and 21 (Bodexpress).'

“The Stewards said nothing as to whether the alleged foul altered the finish of the Derby or otherwise caused any horse to have been denied a better placement in the order of finish.

“Neither Tyler Gaffalione, the rider of the horse the Stewards said was the most “affected” by Maximum Security, nor Chris Landeros, the jockey of Bodexpress, was interviewed by the Stewards.

“When the Stewards said in their statement that they 'interviewed affected riders,' they were not truthful because neither Gaffalione nor Landeros was interviewed by the Stewards.

“After announcing their statement, the Stewards refused to answer any questions.

“The Commission denied Plaintiffs' appeal telling them that 'the law does not provide for an appeal' and 'the stewards' findings of fact and determination are 'final' and not 'subject to appeal.'

“As a result of the disqualification, Plaintiffs, the trainer, and the jockey of Maximum Security were denied any part of the $1,860,000 share of the Derby purse as well as a professional accomplishment that any horseman would cherish for life, plus the very substantial value that a Kentucky Derby winner has as a stallion.

“The winner's share of the Derby purse was paid to the connections of Country House, even though Prat's objection was meritless, indeed frivolous.

“Country House's connections received approximately $1.26 million more for being elevated to first than they would have received for second.

“The betting public was adversely affected by the disqualification.

“It is estimated that those who had wagered on Maximum Security to either win, place, or show, in exactas, trifectas, superfectas, doubles, pick 3s, pick 4s, pick 5s, or the Super High Five would have, but for the disqualification of Maximum Security,  collected winnings estimated to be more than $100 million.

“This action seeks to redress the Defendants' violations of Plaintiffs' Due Process Rights under Section 1 of the Fourteenth Amendment to the United States Constitution and to enforce their rights under the laws of the Commonwealth of Kentucky.

“The remedy requested, inter alia, is a reversal of the decision disqualifying Maximum Security and reinstatement of the original order of finish confirming that Maximum Security is the official winner of the Derby who remains undefeated.

“In a related matter, it has been reported that a $100 million class action lawsuit is being considered by those who wagered on Maximum Security and were impacted by the lack of transparency and integrity associated with the disqualification process that lasted between 22 and 23 minutes. In the aftermath of that decision, Twin Spires and Churchill Downs Inc.-related companies promptly announced that their customers would be reimbursed for wagers on Maximum Security, which can be viewed as an admission that Churchill itself disagreed with the stewards' decision.

“Those bettors who did not wager through Churchill-related companies were left with no financial recourse, notwithstanding that Churchill received significant revenue from all of the outlets to whom they sent their signal.

“Since Gary and Mary West are not involved in any potential class action there will be no further comment from the West team on that issue, although Gary and Mary West have empathy for those people who lost approximately $100 million on their wagers because of the stewards' actions. If and when a class action suit is filed, questions related to the filing should be directed to the counsel of record in the class action.”